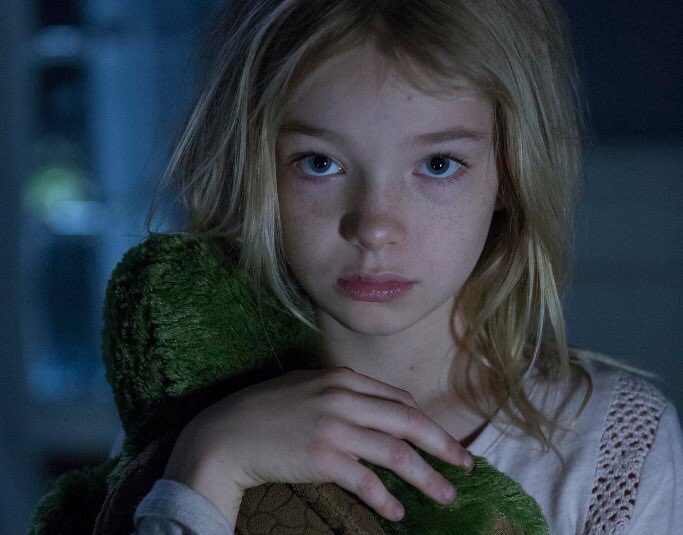 STEPHANIE (2017), a horror film about a little girl facing an unknown horrific threat all by her lonesome almost works.

What stops this flick from ultimately succeeding is a lack of courage on the part of the filmmakers to take this story to the deepest dark places it should have gone. Instead, we have a plot tweak midway through that changes everything, and the film is worse off for it.

When STEPHANIE opens, young Stephanie (Shree Crooks) is home alone, occupying herself with her imaginary stuffed animal friends, getting into mischief as any child would do left to their own devices. She attempts among other things to cook and clean on her own, running afoul of every day threats like broken glass on the floor while walking barefoot. You’ll wince even before the supernatural elements are introduced.  Just why she’s by herself we’re not exactly sure, although there seems to have been some sort of apocalyptic incident that has wiped out at the very least the population around her.

One night, as she brushes her teeth and plays in front of the bathroom mirror, she hears a strange noise coming from the darkness. She knows what it is. Evidently, there is some sort of “monster” which enters her house at times, and to escape, she has to hide and remain silent. She hears the monster foraging throughout the house, growling and sniffing for prey, and then it leaves.

Adding to the mystery there’s also a dead body in her house, Stephanie’s brother, who seems to have succumbed to whatever malady wiped out everyone else. Stephanie it appears is immune. But then one day, Stephanie’s parents return, and while she is overjoyed to see them, she suddenly wonders why they left her alone in the first place.

And it’s at this point in the movie where the plot changes, and from here on in, things just  don’t work as well because the story enters territory we’ve all seen before and any innovative freshness the film possessed earlier disappears.

Which is too bad because the first half of STEPHANIE is really, really good, and the biggest reason why is the performance by young actress Shree Crooks as Stephanie. I hesitate to give such high praise to such a young actress, but she’s so good here she’s nearly mesmerizing. Early on, when she has the run of the house, she’s fun to watch, and later when the monster invades, you share in Stephanie’s terror. Crooks does fear really well.

So, early on the story had me hooked. I wanted to know why Stephanie was alone and just what kind of monster kept breaking into her house.  And I cared enough about young Stephanie that I was ready to watch a film about just one little girl on her own having to square off against a monstrous threat.

But ultimately this isn’t the story STEPHANIE has to tell. Her parents arrive home, and the inevitable plot twist isn’t up to snuff and only serves to steer the story into familiar territory, which is far less satisfying than what had come before it. Unfortunately, when all is said and done, STEPHANIE ends up being just a standard horror movie.

Frank Grillo and Anna Torv [recently of Netflix’ MINDHUNTER (2017-19)] play Stephanie’s parents, and while there’s nothing wrong with their performances, they unfortunately appear in the film’s inferior second half.

The screenplay by Ben Collins and Luke Piotrowski tells two different stories, and I enjoyed the first story much better than the second. The first half of the story with Stephanie home alone works so well I was really looking forward to seeing how she was going to deal with the monster in her house, but that confrontation never happens.

Director Akiva Goldsman sets up some suspenseful scenes early on, especially when the monster invades the house. Goldsman also deserves plenty of credit for capturing such a powerful performance from such a young performer. Shree Crooks completely carries the first half of the movie all by her lonesome.

Later, when the story pivots, the scares are much more standard, the results more predictable.

STEPHANIE did not have a theatrical release and was instead marketed straight to video on demand. I saw it on Netflix.

As it stands, it’s not a bad horror movie, but based on the way it started, it had the potential to be something very special, if only the initial story had been allowed to develop.

In spite of this, Shree Crooks delivers the performance of the movie. She’s terrific throughout, and she’s the main reason to see STEPHANIE.