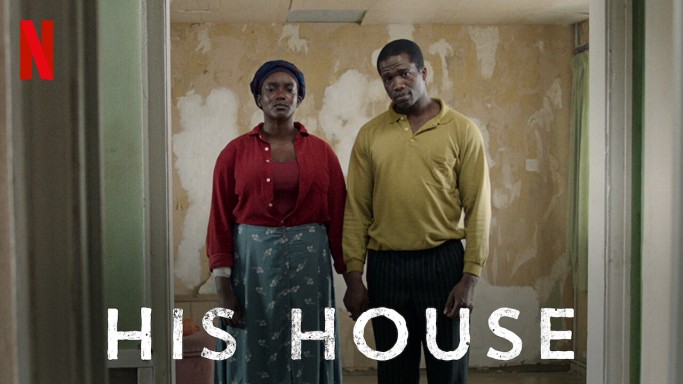 Sometimes a film’s premise makes all the difference.

And here with HIS HOUSE (2020), a new horror movie now available on Netflix, the plot point of a refugee couple from the Sudan trying to make their way in their new home in England, only to find that it’s haunted, gives this one an edge.

It doesn’t quite lift this one on its own, but for the most part, HIS HOUSE is a decent horror movie worth checking out.

Bol (Sope Dirisu) and Rial (Wunmi Mosaku) survive a harrowing boat journey from the Sudan, seeking asylum in England. However, their daughter does not, as she drowns during a violent storm. While Bol and Rial mourn the loss of their daughter, they are set up in a home in a small English town, but they have to follow certain rules or else they will be deported back to the Sudan where violent tribal clashes would jeopardize their lives. One of the rules is they must stay in their home, as they are not allowed to move somewhere else.

While the house is an obvious slum, for Bol and Rial, they are happy to take it. However, soon after they move in, they realize that they are not the only ones there, as a sinister presence makes itself known, a presence that speaks to them about giving them their daughter back, but at a price and a sacrifice that is horrifying to accept.

As I said, the premise of HIS HOUSE helps this one a lot. The story of immigrants fighting to survive in a new nation speaks to current events, and the brutal tale of the Sudan exposes horrors even before the supernatural elements arrive.

I enjoyed the script by director Remi Weekes, based on a story by Felicity Evans and Toby Venables. The story speaks to the difficulties of trying to rebuild one’s life after devastating loss. And the revelation near the film’s end only makes this story all the more tragic.

The supernatural stuff works as well. While I wouldn’t call this one outright scary, it is very creepy, and there are some winc-inducing scenes toward the end.

I liked HIS HOUSE for the most part, although I thought the pacing was rather slow.

Both Sope Dirisu as Bol and Wunmi Mosaku as Rial are very good in their roles. They make for a convincing couple. And Matt Smith delivers a smart performance as their caseworker Mark who can’t help feeling empathy towards them.

Javier Botet plays the witch here, and he’s rather creepy. Botet has had lots of experience playing similar monster roles in SCARY STORIES TO TELL IN THE DARK (2019), SLENDER MAN (2018), and INSIDIOUS: THE LAST KEY (2018), to name just a few.

HIS HOUSE didn’t knock my socks off, but it did creep me out for most of its 90 minutes, and I enjoyed it’s refreshing take on the haunted house trope.