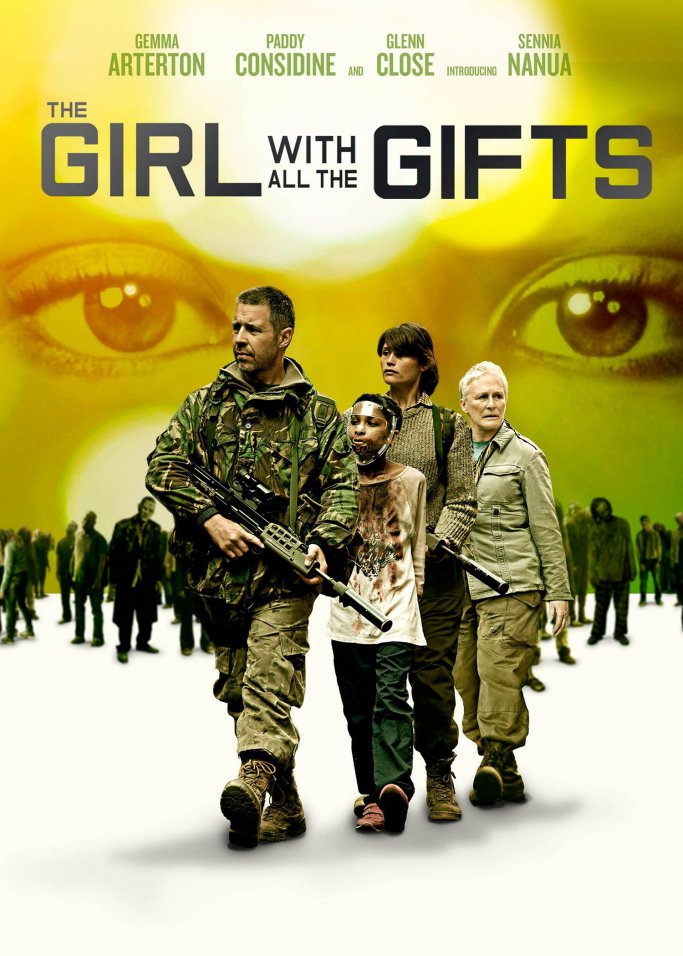 The best stories supersede the genre.

The fact that this movie has a deep and clever screenplay comes as no surprise since screenwriter Mike Carey adapted the screenplay from his own very successful novel of the same name.

THE GIRL WITH ALL THE GIFTS takes place in the near future, where a deadly disease has turned people into flesh eating zombies. Yup, it’s another variation of the zombie apocalypse. The difference here is that a group of children hold the key to the cure.

Teacher Helen Justineau (Gemma Arterton) is tasked with educating these children, who are subdued and guarded 24/7 by the military, commanded here by Sgt. Eddie Parks (Paddy Considine), because these special children are pretty much zombies with consciousnesses who still retain their intellect and personalities.

To find the cure for the disease, scientist Dr. Caroline Caldwell (Glenn Close) busily experiments on these kids and treats them like lab rats, cold to the fact that they die from her methods, a notion that does not sit well with Ms. Justineau. One of the children, Melanie (Sennia Nanua) forms a bond with Ms. Justineau, and the two grow to care for each other very much.

When the “hungries” overrun the facility, and all hell breaks loose, a small faction of survivors which include Melanie, Ms. Justineau, Dr. Caldwell, Sgt. Parks, and some of his soldiers, have to find ways to survive and make their way to safety, even while Dr. Caldwell insists she is so close to a cure, and perhaps just one more experiment would do the trick, one more experiment….on Melanie.

THE GIRL WITH ALL THE GIFTS tells a really interesting story that as I said rises above the genre. It’s a fabulous screenplay by Mike Carey. The first half grabs you with its originality, keeping the audience guessing as to what’s going on and then keeping things intriguing. It also generates decent suspense early on. The second half of the movie, once the zombies overrun the facility, becomes much more of a standard horror flick, but it still works well.

I loved the cast. I’m a fan of Gemma Arterton, having enjoyed her work in such films as THEIR FINEST (2016) and the Bond flick QUANTUM OF SOLACE (2008). Here she’s a caring teacher who it turns out is also as tough as nails.

Paddy Considine makes for an effective Sgt. Parks, a military man who is all about duty but grows more sympathetic as the story goes along. Considine has enjoyed notable roles in such films as THE DEATH OF STALIN (2017) and on the TV show PEAKY BLINDERS (2016) where he played a very villainous priest, Father John Hughes.

And Glenn Close is deliciously cold as Dr. Caroline Caldwell, the scientist with ice in her veins. It’s a terrific performance.

But it’s Sennia Nanua who really steals the show here as young Melanie, the most intriguing character in the movie. Nanua is fantastic, and Melanie is one of the more watchable horror movie characters I’ve seen in a long while.

Director Colm McCarthy makes sure that this one remains scary even with its more literate screenplay. There are plenty of disturbing scenes, the type you expect to find in a movie about flesh eating zombies. The film also does a nice job mixing zombie horror with human horror, something the TV show THE WALKING DEAD (2010-present) always excelled at. Some of the scenes with Dr. Caldwell are just as chilling and suspenseful as the scenes with the “hungries.”

This Halloween, if you want to watch superior horror, a frightening story wrapped around a thought-provoking concept, then you’ll definitely want to watch THE GIRL WITH ALL THE GIFTS.

One thought on “IN THE SPOOKLIGHT: THE GIRL WITH ALL THE GIFTS (2016)”