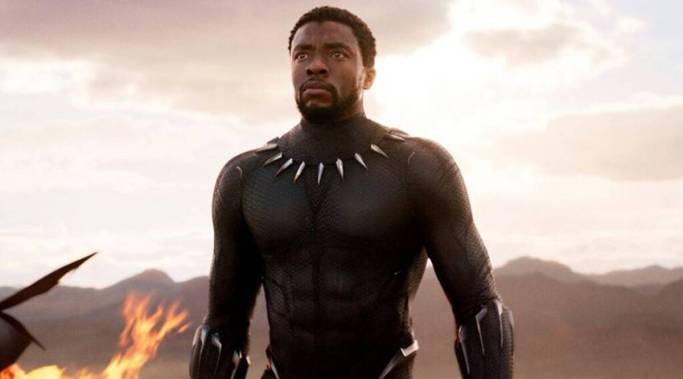 Chadwick Boseman tragically passed away this past Friday, August 28, 2020 after a four year battle with colon cancer. He was 43.

My favorite part of BLACK PANTHER and what makes it so special is that it transcends the super hero genre. It says more about race relations and the plight of the African American male and race in general and does a better job of it than most movies made with that singular purpose in mind. It features two knock-out performances, Chadwick Boseman as Black Panther, and Michael B. Jordan as his nemesis Erik Killmonger, but the lines between hero and villain in this movie have never been more gray. The argument can be made that the most sympathetic character in the movie is Killmonger. However, Black Panther retains the upper hand, not because of superior might, but because he undergoes a transformation which allows him to accept and understand Killmonger’s plight and source of anger.

The performances by Boseman and Jordan are both brilliant.

It’s always sad when artists pass away so young, but in this particular case, it’s very sad that an actor with as much talent and potential as Boseman will not grace the big screen any longer.

Here now is a partial list of Boseman’s 34 screen credits:

THE EXPRESS (2008) – Floyd Little – after appearing on TV for several years, Boseman debuts on the big screen in this drama about college football player Ernie Davis, the first African-American to win the Heisman trophy.

42 (2013)- Jackie Robinson- the first time I saw Boseman in a movie was here in 42, where he played Jackie Robinson. And while I enjoyed Boseman well enough, I have to admit Harrison Ford left more of a lasting impression for his exceptional performance as Branch Rickey.

CAPTAIN AMERICA: CIVIL WAR (2016) – Black Panther- first appearance as Black Panther in this superior Marvel superhero adventure, which plays more like an AVENGERS movie since so many of the Marvel characters appear in this one.

BLACK PANTHER (2018) – Black Panther- Boseman stars in Black Panther’s first standalone movie, in what for me is the best Marvel superhero movie yet. Superior action sequences, amazing photography and color schemes throughout, brilliant acting by Boseman and Michael B. Jordan, and the best part, a story about race that transcends the superhero genre. I would argue that when teaching race relations, this movie is must see viewing.

AVENGERS: INFINITY WAR (2018)- Black Panther- Third time playing Black Panther is the most tragic, as he is part of Marvel’s bold decision to have the villain, Thanos, win, at the expense of many of Marvel’s most beloved superheroes, Black Panther among them, who perish in one of the darkest endings of any superhero movie. The sold out audience I saw it with groaned aloud throughout the final few minutes.

AVENGERS: ENDGAME (2019) – Black Panther- All’s well that ends well. Yep, through some time manipulation by the brilliant Doctor Strange, the tragic conclusion of INFINITY WAR is reversed. Sort of. But enought to satisfy fans, many of whom cite this movie as their favorite AVENGERS film. I still prefer the dark INFINITY WAR, as I still think its ending was one of the boldest filmmaking decisions in many years.

21 BRIDGES (2019) – Andre Davis- Boseman plays a NYPD police detective in search of cop killers in a movie that is ultimately done in by an inferior script, as the plot becomes contrived and convoluted by film’s end.

DA 5 BLOODS (2020) – Stormin’ Norman- Spike Lee’s superior film— my favorite Lee film in years— about four African American vets who return to Vietnam years later to reclaim the remains of their fallens squad leader. Boseman plays that leader, and so his scenes are all in flashback, but as always, he’s excellent in the role. Lee also made the curious decision to feature the same four actors in the flashbacks, so they all appear old alongside the younger Boseman, effectively highlighting the notion that Boseman was never allowed the oppotunity to grow old, now a sad example, where art imitated life.

While DA 5 BLOODS is Boseman’s final movie that has been released, he was working on a couple of other film projects before his death, and so it’s possible we will see him again on screen, posthumously.

Chadwick Boseman was an extremely talented actor, and if you have not seen his movies, you definitely should. His presence on screen will definitely be missed.

As always, thank you for reading.