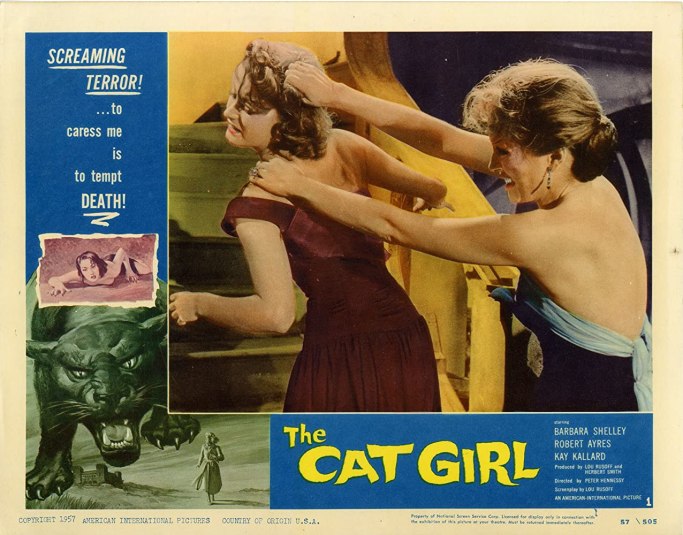 No, she’s not a villain on BATMAN. That’s Catwoman.

And no, she’s not Batman’s ally. That’s Batgirl.

She’s not even the lead in a classic horror movie directed by Jacques Tourneur and produced by Val Lewton. That movie is CAT PEOPLE (1942).

CAT GIRL was made fifteen years later and is largely inferior to Val Lewton’s influential horror movie, but the good news is the lead role in CAT GIRL is played by one of my favorite British actresses, Barbara Shelley. Shelley has starred in such classic British horror movies as BLOOD OF THE VAMPIRE (1958), Hammer’s THE GORGON (1964) with Peter Cushing and Christopher Lee, and DRACULA: PRINCE OF DARKNESS (1966), again with Lee, as well as the science fiction classics VILLAGE OF THE DAMNED (1960) and QUATERMASS AND THE PIT (aka FIVE MILLION YEARS TO EARTH) (1967).

But before all these came CAT GIRL.

Shelley always adds class and distinction to her roles, and her performance here is no exception. She’s excellent in the lead role, even as the rest of the film ultimately lets her down.

The plot is quite simple. A young woman Leonora Johnson (Barbara Shelley)  returns to her family home with her new husband, where she learns from her crazy uncle that their family is cursed, that they have this bizarre attachment to cats, so much so, that once home, Leonora falls victim to this curse and becomes a murderous cat creature.

Things actually start very well. The beginning of the movie is steeped in creepy atmosphere. The black and white photography by director Alfred Shaughnessy is ripe with dark shadows and completely captures the classic haunted house feel. But unfortunately as the story develops the film loses its atmosphere somewhat, driven by the fact that there’s simply not that much suspense, especially since the cat girl sequences look cheap and aren’t very good. The killer cat sequences are laughable.

The screenplay by Lou Rusoff also gets off to an intriguing start. See, not only is Leonara in danger from her looney relatives, but her own husband Edmund (Ernest Milton) is a real creep! We learn early on that before marrying Leonora, he had a fling with her best friend, and worse yet, the fling continues still, and he makes it clear that his marriage to Leonara is not going to get in the way of this other relationship. Complicating matters is this friend and the man she is currently dating are  also accompanying Leonora and Edmund on this trip to Leonora’s ancestral home, and all four of them are supposed to be friends.  This has all the makings of a classic sitcom! Not.

So, even before the cat curse comes into play, things are rather interesting! But sadly, they don’t really stay that way, and that’s because Leonara once she learns the truth about her husband simply lets Cat Girl take over and seeks some friendly feline vengeance.

Lou Rusoff also wrote the screenplays to several other low budget horror movies from the 1950s, including DAY THE WORLD ENDED (1955), IT CONQUERED THE WORLD (1956), and THE SHE-CREATURE (1956).

CAT GIRL was originally released as part of a double bill with THE AMAZING COLOSSAL MAN (1957), a film I like much better than CAT GIRL, which has some good things going for it but not enough to lift it to classic horror status.

So, in spite of a strong atmospheric opening, and the presence of a group of friends in some complicated relationships, and Barbara Shelley in the lead role, CAT GIRL is eventually done in by low production values and a lack of decent scares.

While she tries her bloody best, at the end of the day, there’s still only one female feline leading the pack. Yup, Catwoman is still top cat.

Maybe Cat Girl could apply for the position of Catwoman’s enforcer? I have no doubt that she’d be purr-fect in that role!