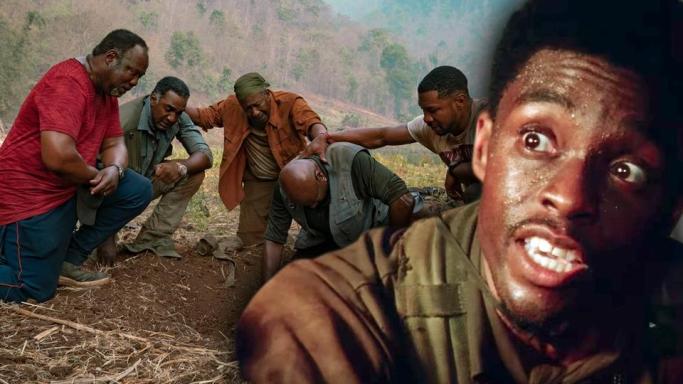 DA 5 BLOODS (2020), Spike Lee’s latest movie, and his first for Netflix, is must-see viewing, especially in light of current events.

It offers a history and an understanding of Black Lives Matter that argues that the plight of the African American male in the United States has been an issue since the country was first formed, and in spite of various movements to make changes, from the Civil War to the civil rights movement in the 1960s, things here in 2020 remain largely the same. And it does it with a story about Vietnam that is straightforward without being preachy. It makes its points without hitting you over the head with them.

DA 5 BLOODS is the story of four Vietnam vets, Paul (Delroy Lindo), Otis (Clark Peters), Eddie (Norm Lewis), and Melvin (Isiah Whitlock, Jr.), who return to Vietnam in 2020 to both locate the remains of their fallen Squad Leader Norman (Chadwick Boseman) and to recover a stash of gold which they had found and buried in the jungle there.

The bulk of the movie is this present-day story, but the film also incorporates flashbacks to show us these five friends—da 5 Bloods— in action in Vietnam. Spike Lee does a couple of creative things with these flashbacks. He didn’t use younger actors or CGI affects to make the four main characters look younger. They appear in these scenes looking as old as they do now. Only Norman, played by Chadwick Boseman, appears young, which serves to accentuate that Norman’s life was cut short and he never got to grow old. I thought this was a bold decision on Lee’s part, as this is hardly ever done, especially with the available CGI technology. It’s a decision that really worked.

The other creative decision Lee made with the flashback sequences is he changes the screen format for them. The movie is in widescreen format, but when the flashbacks occur, the ratio changes and the picture is reduced in size. It’s another neat effect that works.

The screenplay by Danny Bilson, Paul De Meo, Kevin Willmott, and Spike Lee is full of intricacies and works on multiple levels. It hammers its point home that the plight of African Americans in the U.S. has been going on since day one— with references to George Washington owning slaves— and that it continues to this day.

And the main story of the four men returning to Vietnam is a good one, and would have worked well as a straightforward war drama. It’s a really good screenplay. It was originally written by Danny Wilson and Paul De Meo as a story about four white Vietnam veterans, and for a while Oliver Stone was attached to the project. It eventually made its way to Spike Lee, and he and writer Kevin Willmott rewrote the script and changed the story to be about black soldiers instead.

The other subplot is that these four friends have changed over the years, and throughout their journey back into Vietnam they struggle to get along because they have changed so much. Paul, played by Delroy Lindo, is the most interesting character of the four. He suffers from PTSD and is haunted by dreams of Norman, who he idolized. To make matters more complicated, Paul’s son David (Jonathan Majors) also joins the group, against his father’s wishes, but David is worried about his dad and wants to be there to keep an eye on him. Paul also feels guilty because he has never been able to love his son the way he wanted.

To the shock of his friends, Paul is also a Trump supporter, and even wears a MAGA hat! As he explains it, he is sick and tired of the system constantly walking over him and taking from him, and so he wants to blow it all up and vote for someone who hates the system like he does. Delroy Lindo is excellent in the role, and he delivers the best performance in the movie.

Clark Peters as Otis, Norm Lewis as Eddie, and Isiah Whitlock Jr. as Melvin are also very good, and each of their characters also have their own back stories. And Chadwick Boseman, who of course plays Black Panther in the Marvel movies, and also played Jackie Robinson in 42 (2013) is really good here in a limited role as Norman. He’s only in the flashback scenes, but he makes his presence known, and it’s clear why his friends admired him so much. The scene when they finally find his remains is one of the most emotional scenes in the movie.

Jean Reno also shows up as a shadowy French businessman Desroche who is also interested in the gold the men are searching for. Van Veronica Ngo enjoys some chilling scenes as Hanoi Hannah. And Melanie Thierry is very good as Hedy, a French expert on land mine diffusion who David meets in a bar and who later becomes an integral part of the storyline.

DA 5 BLOODS doesn’t skimp on the war violence either. There are some gruesome scenes, especially toward the end.

There are also plenty of emotional scenes and poignant ones, including the sequence where Otis visits an old girlfriend, and Paul and David’s father/son interactions.

There are all kinds of memorable exchanges, like when Paul calls his friends the N-word, and they take offense. There’s conversatons about drug abuse, alcohol, guns, and other hot button topics. The script even throws in an Easter Egg to one of Lee’s favorite movies, THE TREASURE OF SIERRA MADRE (1948), as one of the characters utters the film’s most famous line.

All in all, DA 5 BLOODS is one of Spike Lee’s best movies. I actually enjoyed it a bit more than his previous film, BLACKKKLANSMAN (2018), which was also an excellent movie and was a Best Picture Nominee. I thought DA 5 BLOODS was a more ambitious movie and a bit grander in scope. That being said, it’s a bit long, clocking in at two hours and thirty four minutes, and I thought it dragged somewhat during its second half.

But it’s still one of Lee’s best.

It convincingly defends Black Lives Matter and explains why this movement is so important, because nothing has changed for over two hundred years. And while the film offers a conclusion of hope borne from tragedy and violent bloodshed, it does so with one eye on the future that perhaps at long last this is indeed the moment of change people have been waiting for, but also with another eye firmly set on the past as a reminder that we’ve had these moments before and they haven’t changed a thing.

DA 5 BLOODS is a movie about friendship, bloodshed, and sacrifice. It travels between the 1960s and 2020 effortlessly, offering looks at two key volatile periods in the history of race relations, offering a vision that perhaps this time the change is permanent and real.