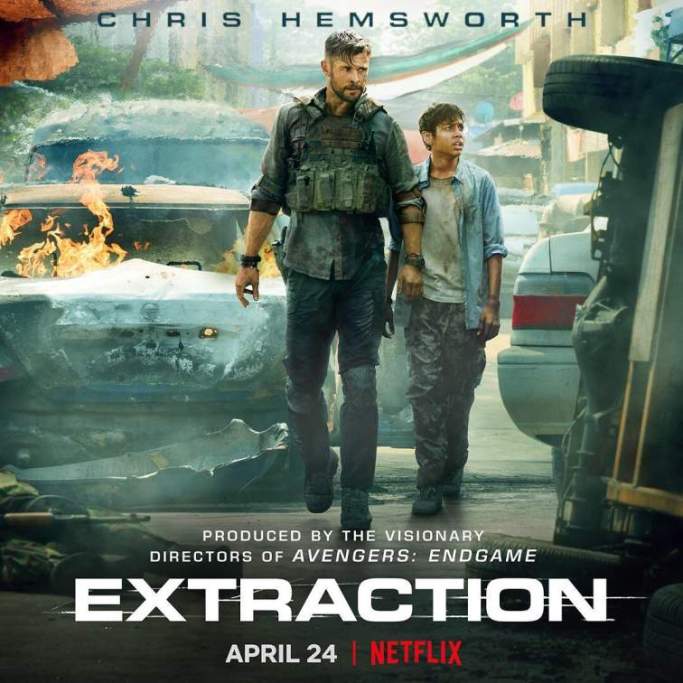 EXTRACTION (2020), a Netflix original action flick starring Thor himself, Chris Hemsworth, premiered last week on the ubiquitous streaming service with a ton of hype and promotion. In fact, the film’s ads definitely had the feel of a theatrical release.

Does this actioner by a first time director known for his stunt work on the Marvel superhero movies live up to the advertising?

EXTRACTION takes place in Dhaka, Bangladesh, where the most powerful drug lord of the land kidnaps the young son of a rival drug lord, who happens to be in prison. This rival drug lord tells his right hand man, Saju (Randeep Hooda) that if he doesn’t rescue his son, his own son will die. Saju knows he can’t do the job on his own, so hires a group of mercenaries to do the job for him, all the while knowing he can’t afford their price, and so from the  get-go he’s planning to double cross them.

The mercenaries are led on the ground by Tyler Rake (Chris Hemsworth), a fearless soldier haunted by some personal demons from his past. Nevertheless, Tyler is very good at what he does. He’d give Rambo a run for his money. And he does successfully find the boy, Ovi (Rudhraksh Jaiswal) but extracting him from Dhaka proves difficult, because the all-powerful drug lord Amir Asif (Priyanshu Painyuli) shuts down the city, and since Saju has double-crossed the team, Tyler is surrounded on all sides with little hope of getting the boy out of Dhaka.

But Tyler has no intention of letting the boy die on his watch.

The best part about EXTRACTION are its action scenes. The action sequences here are second to none. These are hard-hitting violent R-rated fight scenes, and they are shot exceedingly well, including one very long sequence done in a single take, reminiscent of a similar sequence in ATOMIC BLONDE (2017).

The fact that these sequences are so expertly handled comes as no surprise since director Sam Hargrave worked as a stunt coordinator and second unit director on many of the Marvel superhero movies. His expertise is on full display here. It’s an exceptional directorial debut. The camera gets in close to the action, and things happen with such speed you really feel like you are right there in the middle of the combat with the actors.

And these action sequences had better be good because the film is almost nonstop action. The first hour is an incredible fight-filled thrill ride. It’s relentless. Things slow down midway so the audience can catch its breath, before picking up again for an intense conclusion. Action fans will not be disappointed.

Nor will fans of good storytelling. The screenplay Joe Russo, based on the graphic novel “Ciudad”by Ande Parks, tells a riveting story that never lets up. Chris Hemsworth’s Tyler Rake is a likeable character, in spite of the bloody path he carves out, and his mission here, to rescue a young boy, even when his superiors tell him to cut his losses and leave the boy behind, is an admirable one. The dialogue is also first-rate.

It’s an excellent screenplay by Russo, who of course is known as a director, as he directed CAPTAIN AMERICA: CIVIL WAR, AVENGERS: INFINITY WAR, and AVENGERS: ENDGAME.

So, yes there’s a big Marvel connection here, solidified even more with the presence of Chris Hemsworth in the lead role. It’s an outstanding performance by Hemsworth. I liked him here every bit as much as I’ve enjoyed watching him play Thor in the Marvel movies.

Randeep Hooda is also excellent as Saju, an ex-special forces soldier who finds himself having to double cross a team of deadly mercenaries pitting him against Rake and rival drug lords in order to protect his own son. The fight scenes between Hooda and Hemsworth are some of the best in the movie.  Had this movie been made back in the 1980s, you could easily imagine Schwarzenegger and Stallone in these roles.

And David Harbour who plays Police Chief Jim Hopper on STRANGER THINGS (2016-present) shows up midway through as an old friend who steps up to give Tyler and the boy safe— eh hem—harbor.

I really liked EXTRACTION. It’s one of the best action movies I’ve seen in years, with some of the most exhilarating action sequences ever put on film. It’s that good.

The only drawback is I wished I had seen this one on the big screen. In IMAX. It’s worthy of that kind of viewing.

With EXTRACTION, Sam Hargrave has put himself on the map as a premier action movie director, while Chris Hemsworth has solidified his standing as a truly bona fide action star.