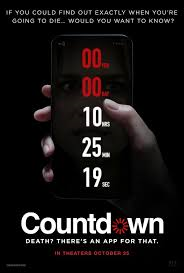 COUNTDOWN (2019), the new horror movie about an app that predicts people’s death dates with deadly accuracy, is all over the place.

COUNTDOWN opens  with a group of teens as they discover a new app called “Countdown” which will give them their death dates. When one of the girls sees her death date within a few hours, she panics. She flees her boyfriend’s car because he’s been drinking, but she ends up dying anyway.

Later, her boyfriend, in the hospital because of injuries sustained in a car crash, sees that he too only has hours to live. He relays his fears to his nurse, Quinn Harris (Elizabeth Lail), and when he too dies, Quinn decides to check out the app for herself. And when Quinn sees that she too has only days to live, she— well, you get the idea. Anyway, since Quinn is the main character here, she decides she has to fight back and get to the bottom of this mystery before it gets her.

And that’s the plot of COUNTDOWN.

The biggest strike against COUNTDOWN is that it doesn’t make a lot of sense. Now,  these apps do exist in real life, so that’s not the problem, but the film’s leap of making the app deadly isn’t believable at all.  The screenplay by director Justin Dec attempts to give answers, but they’re not always clear.

Quinn intimates that the app is targeting certain people, as other people who download the app have death dates years in the future, but this isn’t supported in the movie. The app seems to be making accurate predictions. It only becomes deadly when the person learning of their death date attempts to cheat death.

Later, the story introduces a supernatural element that is supposed to make sense of it all, but it never really explains what the evil demon or devil is really doing. Is this entity controlling the app? Is the app itself evil? The film never really nails this down. Plus, once the supernatural is introduced, it all becomes very far-fetched and rather ridiculous.

The first half of the movie is particularly bad and very muddled. It gets a bit better when Quinn meets another man Matt Monroe (Jordan Calloway) whose life has also been threatened by the app. As soon as Matt enters the movie, things get better. He and Quinn share a real chemistry and for a brief while the story becomes rather interesting.

Their quest for answers also takes them to the comedic characters in the film, who provide the movie with its livelier moments. They seek out help at their local phone store and there meet an electronics guru named Derek (Tom Segura) who promises them he can delete the app from their phones. Derek is a quirky character who in spite of the fact that he’s played for laughs is one of the more interesting characters in the movie.

Their search for answers also takes them to a priest Father John (P.J. Byrne), a self-proclaimed demon expert. Father John is about as unconventional a demon hunter as you will find in a movie. As such, while his scenes are all rather light and humorous, they are also completely unrealistic. The film definitely sacrifices realism for laughs.

So, COUNTDOWN gets better for a little while before ultimately crawling towards a conclusion that simply is standard fare and nothing memorable.

There’s also a ridiculous sub plot involving a doctor, Dr. Sullivan (Peter Facinelli) who attempts to sexually assault Quinn and turns out to be a genuine creep. Unfortunately, these scenes come off as superficial and phony, an insult to the subject matter.

On the other hand, Talitha Bateman, who we saw a couple of years ago in ANNABELLE: CREATION (2017), enjoys some fine scenes as Quinn’s younger sister Jordan who also runs afoul of the app.

And Elizabeth Lail is very good in the lead role as nurse Quinn Harris. She’s just stuck in a bad movie. Likewise, Jordan Calloway is equally as good as Matt Monroe, and their scenes together are the best in the movie. Their performances even make you forget the ridiculousness of the plot. Unfortunately, Calloway isn’t in the movie all that much, and so the best parts of this one are fleeting. Had Lail and Calloway been in the entire movie together, the movie would have been much better.

And there are other problems as well.

The scares are practically nonexistent. In fact, I can’t remember any scenes here that were particularly scary or suspenseful. And sometimes these sequences were downright laughable.

For example, one of the goofiest parts of the movie is when the victims see a strange apparition following them, and this apparation looks like the Grim Reaper. I’m sorry, but I couldn’t take this image seriously at all.

In fact, none of the supernatural elements came off as believable. They were strictly played for laughs.

And that’s the biggest problem with COUNTDOWN. Its horror aspects are never taken seriously, and the film only succeeds when it’s aiming for your funny bone. So, it’s not a complete loss as some of the comedy works, but if you’re looking for a riveting horror movie this Halloween, COUNTDOWN isn’t it.