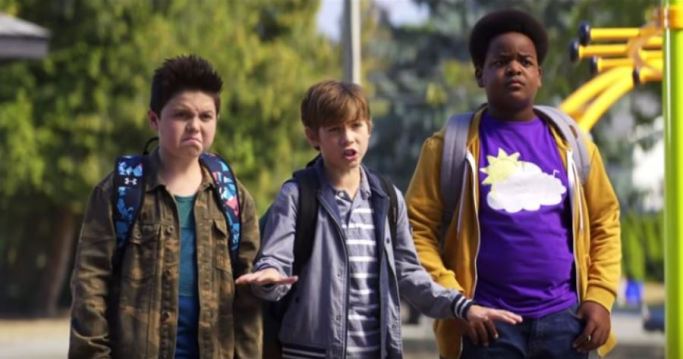 GOOD BOYS (2019) is one of those movies where you’ll find yourself laughing at things you know you have no business laughing at.

That’s because it’s an R-rated comedy about tweens, three boys who are about to enter 6th grade. Its story features raunchy language, drugs, and sex, among other things, but the fundamental reason GOOD BOYS works so well is its screenplay by Lee Eisenberg and Gene Stupnitsky is incredibly sincere and sensitive.

The tweens act like tweens, and that’s part of the comedy. When the three boys inadvertantly find themselves in possession of illegal drugs, they don’t break open the container and get high. They scream about the dangers of drugs and try to get rid of the stuff. When they discover a bunch of sex toys, they have no idea what they are and use them for all sorts of different things. When they discover a sex doll, they think it’s a CPR doll.

The writing is sharp and on the mark, the laughs fast and furious.

The story in a nutshell involves three tween boys, Max (Jacob Tremblay), Lucas (Keith L. Williams) and Thor (Brady Noon) who are best friends and call themselves  “The Bean Bag Boys.” When they get invivited to the cool kid’s party, they are overjoyed until they learn that it is a “kissing” party, and as much as they want to kiss the girls there, they have no idea how to kiss.

And so they decide to find out. One complication leads to another, and before they know it, they are in some serious sh*t.

Depending on how judgmental you are about movies, you may or may not like GOOD BOYS. If the idea of having 6th graders involved in comedic adult situations turns you off, you probably won’t enjoy this one.

I liked this one because it’s genuine and remains true to its characters. The boys here never act like adults. They act exactly the way 6th graders act, and when placed in these outrageous comedic situations the combination of their innocence with the zany proceedings results in constant hilarity.

One thing working against GOOD BOYS, which is no fault of the movie, is that the film’s trailers gave away an awful lot. While there are still funny scenes not shown in the trailers, most of the film’s funniest bits I had seen already.

Even so, the laughs really never stop. Director Gene Stupnitsky keeps this one funny from start to finish.

The tween cast is terrific. Jacob Tremblay, a talented young actor who has already made his mark in such notable films as ROOM (2015) and WONDER (2017) where he played Auggie, plays Max here. Of the three boys, Max is the most interested in the kissing party because he wants to kiss Brixleee (Millie Davis) his first real crush, and who he says he may marry one day. Incidentally, Millie Davis also starred alongside Tremblay in WONDER.

This plot point opens the door for a subplot towards the end of the movie where the boys realize they are changing. For example, of the three, Max is the most mature and the first to be interested in girls, and these changes put a strain on their friendship. It also allows the tweens to talk about respecting women, and they are constantly talking about seeking the girl’s consent before kissing. It may not sound like much, but the climactic kissing scene near the end is even more moving when Max approaches Brixlee and before kssing her asks, “Can I kiss you?” and she says, “Yes.”

Keith L. Williams plays Lucas, and his storyline introduces divorce to the story, as his parents are separating. The scenes with his parents are both hilarious and sad, which is no easy feat, but this movie pulls it off with ease.

And Brady Noon plays Thor, who is the recipient of the most bullying and peer pressure of the three, so much so that even though he loves to sing, he drops out of the school musical. Noon’s performance as a boy who likes to sing rises above the traditional cliche.

Molly Gordon and Midori Francis are fun as the two older teens who “go to war” against the boys after they discover the boys spying on them with a drone. The chase scene where the girls pursue the bike-riding boys both in their car and on foot is a highlight. As is the sequence where they send the boys inside a college frat house to buy drugs. Some of the loudest laughs of the entire movie came when the boys gave the frat boys their comeuppance.

And I saw this one in a crowded theater, and the laughs were frequent and loud.

Molly Gordon has been busy lately, as she also starred in supporting roles in BOOKSMART (2019) and LIFE OF THE PARTY (2018). She was notable in both.

Isaac Wang  shows some presence as Soren, the tiny cool kid who hosts the kissing party.

And comedian Lil Rel Howery has some comical moments as Lucas’ Dad. Howery recently showed up in a couple of high quality horror movies, BIRD BOX (2018) and GET OUT (2017).

Nearly all the jokes work. But one of the sequences that didn’t work as well was the scene where the boys had to cross a busy highway. It reminded me an awful lot of a similar scene in a comedy from some years back, BOWFINGER (1999) starring Steve Martin and Eddie Murphy. Too derivative for me.

But all in all, GOOD BOYS is nonstop funny and entertaining. And for a comedy, you can’t ask for much more than that.