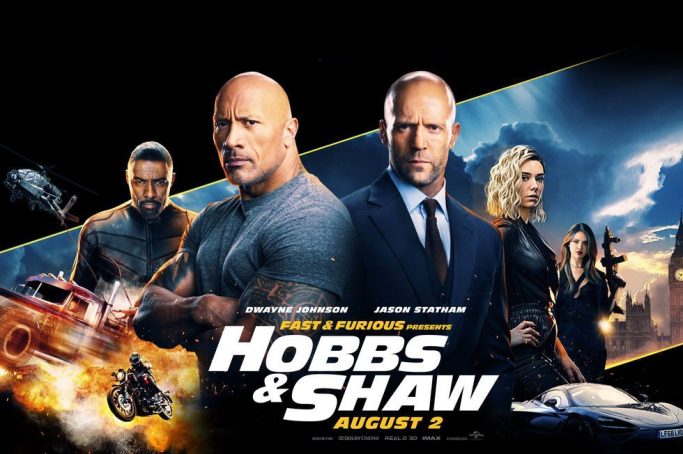 In the interest of full disclosure, I have never seen a FAST AND FURIOUS movie.

Until now, that is.

Way back when the first THE FAST AND THE FURIOUS (2001) came out I just wasn’t that interested, but then they kept coming, and word of mouth and critical reviews said they were getting better and better. But still I resisted, mostly because I hadn’t seen the previous films, but I’m guessing at some point I’ll sit down and eventually start watching these.

Anyway, after eight FAST AND FURIOUS movies, here comes the series’ first “spinoff,” FAST AND FURIOUS PRESENTS: HOBBS & SHAW, a tale featuring characters who appeared in prior movies but who weren’t part of the main core of the cast. I mainly wanted to check this one out because I like the three principal leads, Dwayne Johnson, Jason Statham, and Idris Elba. My expectations were low, but I figured, it might be fun to watch some mindless action scenes featuring these generally entertaining actors.

And I was right.  The action and the dialogue is all very fast, though not so furious. A more apt title for this one would be fast and funny, because really, from beginning to end, this one is played for laughs. I didn’t take any of it seriously, and that was okay.

The plot involves a deadly virus that could wipe out the population of the world, just like that! Yikes!  A former spy (Vanessa Kirby) steals the virus, and a super-charged baddie named Brixton (Idris Elba) will stop at nothing to steal it back. Good guy Hobbs (Dwayne Johnson) is charged with saving the day, and he’s paired with former villain turned hero Shaw (Jason Statham) because the former spy who stole the virus happens to be Shaw’s sister.

Trouble is, Hobbs and Shaw hate each other and refuse to work together, but work together they do, which sets the stage for plenty of banter and one-upmanship throughout.

If you like Dwayne Johnson and Jason Statham, you’ll enjoy this movie because the two actors are likable throughout and do share a fun chemistry together.  Their banter while not hilarious is certainly comical and amusing. There’s a good-natured amiable vibe all through the movie, even though its plot is about a potentially catastrophic virus, and that’s because the film is about as believable as a wrestling match.

Director David Leitch fills this one with exciting action scenes and chases, especially one near the end involving a helicopter and a bunch of cars. Again, fun, but not believable, which for me, pretty much kept this one from being anything special. Technically, it looks great, but it’s all fluff. Leitch also directed DEADPOOL 2 (2018). Speaking of which, Ryan Reynolds is also in the cast, and he gets to ham it up in a couple of scenes. These bits are okay but not overly funny.

The screenplay by Chris Morgan and Drew Pearce has fun with its Hobbs and Shaw banter but that’s about it. Morgan has written a bunch of other FAST AND FURIOUS movies, and Pearce wrote HOTEL ARTEMIS (2018) which I enjoyed a lot.

While Dwayne Johnson and Jason Statham don’t disappoint, Idris Elba doesn’t fare as well. Elba doesn’t get a whole lot of screen time, and his villain in spite of his superpower enhancements is pretty one-dimensional. Elba deserves better.

Vanessa Kirby is very good as Shaw’s sister Hattie, a kick-ass character who can hold her own against the likes of Hobbs and Shaw, although she’s clearly a secondary character here, unfortunately.

As I said, Ryan Reynolds shows up for a couple of scenes, as do Kevin Hart and Helen Mirren. None of these folks make much of an impact.

I liked HOBBS & SHAW well enough, but it’s all fluff, and other than its agreeable leads and well-choreographed action sequences, there’s not a whole lot going on. I’m a story guy, and this one’s story is pretty sparse, which for me, kept this one from being anything special.

It’s not riveting, there’s no edge of your seat excitement, and there’s no intrigue. Instead, there’s playful banter and sanitized action sequences that are mostly played for laughs.

Fast, yes. Furious, not so much.