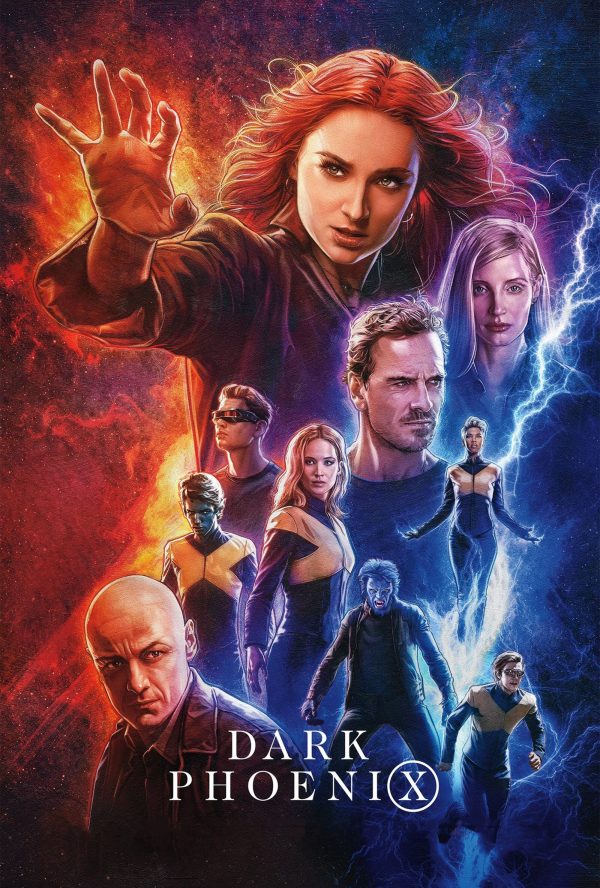 When 20th Century Fox rebooted its X-MEN franchise with X-MEN: FIRST CLASS (2011) that film not only instantly became one of my favorite X-MEN movies but also one of my favorite Marvel superhero movies, period. A major reason for this was the casting of James McAvoy as Professor Charles Xavier and Michael Fassbender as Magneto. These two actors shared some strong chemistry together and lifted FIRST CLASS to its status as a superior superhero movie.

With apologies to Jennifer Lawrence, who has also appeared in these movies as Raven/Mystique, McAvoy and Fassbender have continued to be the best part of these X-Men reboots, and so even though DARK PHOENIX opened to dreadful reviews, knowing that McAvoy and Fassbender were back, I still trekked to the theater to catch this one.

And while I can certainly understand why this one opened to such negative reviews, it wasn’t all bad. It’s just not very good.

DARK PHOENIX tells a story that fans of the X-Men comics know very well, the story of Jean Grey becoming the Phoenix. This story was also told in the previous X-Men series, in X-MEN: THE LAST STAND (2006). Fans didn’t like how the Phoenix story was handled in that movie, and I doubt they’re going to like how it’s handled here.

In DARK PHOENIX, it’s 1992, and the X-Men are enjoying happy times as they are universally perceived as heroes, and a jubilant Charles Xavier (James McAvoy) spends his time giving speeches and has access to a personal phone line to the President of the United States. Life is good.

But during a daunting space rescue, where a crew of X-Men attempt to extract the endangered crew of a space shuttle, a strange space phenomenon, a beastly looking cloud of light, which is threatening the shuttle descends upon the scene, and it’s up to Jean Grey (Sophie Turner) to stop it. She does, but it nearly kills her, and when she returns alive and well, she is given the nickname “Phoenix” as she seemingly has risen from the dead.

But all is not well, as Jean begins to exhibit some weird behaviors and unleash powers she doesn’t seem able to control. She’s suddenly out there doing things that are giving the X-Men a bad name. Further complicating matters, a group of space aliens who we know virtually nothing about led by Vux (Jessica Chastain) want the power which Jean possesses.

With the X-Men reeling, as there is lots of in-fighting over what is perceived as Charles Xavier’s mishandling of Jean Grey, the glory days for these mutant heroes comes to an end. Looking for help, Jean seeks out Magneto (Michael Fassbender) who’s living in the desert with his own band of mutant rebels. And once Magneto learns the truth about Jean and what she has done, he’s not interested in helping her but in killing her.

It’s up to Charles Xavier, who refuses to give up on Jean, to save her, but he’ll have to contend with Magneto, the space aliens, the military, and his own renegade mutants to do it.

This plot actually sounds better than it is, and that’s because the story as told in the movie is kind of all over the place. There were parts that I liked, but taken as a whole this one never becomes a unified story that works.

The screenplay by writer/director Simon Kinberg was far too superficial to be successful. Plot points are glossed over, conversations are banal, the dialogue trite, and the characterizations are without depth.

We learn little about the villainous aliens, and their scenes in this one are sporadic and dull. Speaking of dull, that’s how the X-men come off in this movie. Jean Grey/Phoenix really isn’t all that interesting, and her story isn’t given much depth at all. Jennifer Lawrence does very little as Raven/Mystique. Her role isn’t much more than an extended cameo, and she gets some of the worst lines in the movie.

I like Nicholas Hoult as Beast, but his dialogue here isn’t any better. Michael Fassbender doesn’t show up as Magneto until halfway through the movie, and James McAvoy seems to be stuck saying the same things as Charles Xavier throughout. He sounds like a broken record.

Jessica Chastain is wasted as alien Vuk, a villain with no characterization, back story, or screen presence.

And while Tye Sheridan plays Cyclops, Alexandra Ship plays Storm, Evan Peters plays Quicksilver, and Kodi Smit-McPhee plays Nightcrawler, none of these folks make much of an impact.

There just didn’t seem to be a whole lot of attention to detail. There’s an entire plot of in-fighting with the X-Men, reminiscent of what the Avengers went through in CAPTAIN AMERICA; CIVIL WAR (2016) but the two films aren’t even on the same page when it comes to quality. CIVIL WAR got down and dirty, got right into its characters’ faces, and as a result the audience knew exactly where each character stood and felt their pain.

Not so here with DARK PHOENIX. We know where the characters stand because they say so, but we never feel it. That’s a big difference. Very little of what happens in DARK PHOENIX resonates.

So, what did I like about DARK PHOENIX? Well, it still stars James McAvoy and Michael Fassbender, and so even with the weak dialogue, the two actors are enjoyable to watch, and I did enjoy their performances here, although hands down DARK PHOENIX is the weakest of their X-MEN collaborations.

I also like Nicholas Hoult as Beast, but unfortunately, the women don’t fare as well. I didn’t really enjoy Sophie Turner as Jean Grey, as unlike McAvoy and Fassbender, she was  unable to overcome the bad dialogue. Jennifer Lawrence sleepwalks through her brief stint as Raven/Mystique, and Jessica Chastain is reduced to being robotic as villain Vuk.

While the initial space shuttle rescue was blah, the climactic battle aboard a speeding train at least had some pop.

This may be the end of this class of X-Men. Disney, which owns the Marvel Cinematic Universe films, has bought 20th Century Fox, and rumor has it they will once more reboot the X-Men series and incorporate it into the MCU.

And while this isn’t the best ending of the James McAvoy/Michael Fassbender led series, I’ve enjoyed the ride. It’s too bad that their final film wasn’t better.

Unless of course, they, like the Phoenix, survive the buyout and rise once again as Professor X and Magneto.

I for one wouldn’t mind that at all.