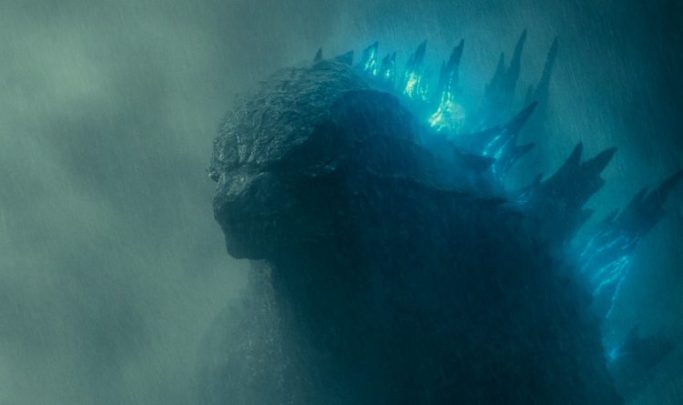 GODZILLA: KING OF THE MONSTERS (2019), the latest American made Godzilla film and sequel to Warner Bros.’ GODZILLA (2014), is a well-acted action-filled monster movie that somehow in spite of these strengths is sadly underwhelming.

And that’s because this movie contains an odd mix of often ridiculous plot points combined with a tone that simply takes itself way too seriously. Instead, the film should have gone for one or the other. A campier tone would have aligned itself better with the goofy superficial plot points. Likewise, a much more realistic and gritty storyline would have fit in better with the film’s serious feel. As it stands, the movie mixes both, and it just doesn’t work.

Following the 2014 Godzilla attacks which left the world a different place, the secret organization Monarch is in charge of monitoring all the new giant monsters which have been discovered in various places around the globe (silly plot point #1), but the U.S. government and military want to shut down Monarch so they can destroy the monsters and save the Earth. But the Monarch scientists argue that the monsters really aren’t here to destroy the Earth but to save it from its worst enemy: humankind.

Top Monarch scientist Dr. Emma Russell (Vera Farmiga) and her husband Mark (Kyle Chandler) lost their son in the previous Godzilla attack, and his death caused them to separate, and Emma alone is raising their daughter Madison (Millie Bobby Brown). It also caused Emma to have extreme ideas about these monsters, and so she aligns herself with the dubious Jonah Alan (Charles Dance)— cue evil villain music!— and the two plan to release the giant monsters so they can unleash their wrath on the world and “cleanse” it of its human cancer.  Hmm. Where have I heard this before? Is that Thanos I see whispering into Dr. Russell’s ear?

But Dr. Russell isn’t arguing a la Thanos that half the population has to be wiped out by the monsters, only some of it, and that at the end of it all there will be new growth and the planet will be greener for it.  Come again?

Of course, when this starts happening, the rest of Monarch and the U.S. military go ballistic, and they not only form an uncomfortable alliance to thwart Emma’s efforts, but they also call in Mark Russell to help them. Mark is mostly interested in finding and saving his daughter, and speaking of Madison, once she learns what her mom has planned, she changes her tune about which parent she wants to be spending time with.

Things grow more complicated when one of the monsters, King Ghidorah, is discovered to be from another planet, and he decides that he’s going to control and lead all the monsters in a battle against Godzilla for supremacy of the Earth.

Godzilla? That’s right! This is a Godzilla movie!  Funny how I haven’t mentioned him yet. Real funny. Not. Which is to say more Godzilla in this story and less elaborate saving-the-world-nonsense would have been most welcome.

Anyway, it’s up to Godzilla to take on King Ghidorah and ultimately save the world.

But as you may surmise from this plot summary, it’s a helluva convoluted way to tell a story about everyone’s favorite fire-breathing radioactive giant lizard!

Poor Godzilla. He was supposed to appear in this movie more than he did in the last one, the 2014 film, and while that may have been the case, it sure didn’t feel like it. For a movie that’s called GODZILLA: KING OF THE MONSTERS it sure seemed like he took a back seat to the other monsters in this one..

The best thing that GODZILLA: KING OF THE MONSTERS has going for it is its cast. It boasts a really strong cast of actors, led by its three principal leads.

Vera Farmiga as Dr. Emma Russell and Millie Bobby Brown as daughter Madison were both excellent. This is Millie Bobby Brown’s film debut. Brown, of course, plays Eleven on the hit TV series STRANGER THINGS (2016-19) so her effective performance in this movie is no surprise.

Vera Farmiga is one of my favorite actresses working today, and while her movie performances have all been superb, it’s her work on the TV series BATES MOTEL (2013-17) based on PSYCHO (1960) where she played Norma Bates that I think is among her best stuff. Her interpretation of Norma Bates was much more nuanced and three-dimensional than the character ever was before in both the Hitchcock movie and Robert Bloch’s original novel.

Kyle Chandler is always enjoyable in nearly every movie he’s in, and he’s been in a lot, from light fare like GAME NIGHT (2018) to more serious stuff like MANCHESTER BY THE SEA (2016) to small supporting roles like in THE WOLF OF WALL STREET (2013), Chandler always makes a lasting impression. His work here in GODZILLA: KING OF THE MONSTERS is no exception.

When these three actors are on-screen, the movie is at its best and most watchable, and the good news is they’re on screen a lot, but the problem is they are stuck in a ridiculous storyline and are often uttering some very superficial and god-awful dialogue that really detracts from the seriousness of their performances.

Incidentally, Kyle Chandler also appeared in Peter Jackson’s KING KONG (2005) which is not part of the current Warner Bros. giant monster universe, and he’s set to appear in the next film, GODZILLA VS. KONG.

The supporting cast is every bit as good as the three leads.

You have Ken Watanabe, Sally Hawkins (THE SHAPE OF WATER [2017]), Ziyi Zhang, and Bradley Whitford as fellow Monarch scientists. Watanabe and Hawkis are reprising their roles from the previous Godzilla movie, and in Watanabe’s case, he’s playing Dr. Serizawa, a name that goes back to the original GODZILLA film from 1954.

Bradley Whitford gets the liveliest lines in the movie, but strangely, his frequent attempts at humor seem to misfire repeatedly. Again, it’s that odd mix, and his campy lines seem out-of-place with the serious tone surrounding him.

David Strathairn plays Admiral William Stenz, another character back from the 2014 film, and Charles Dance does his villainous best at bad guy Jonah Alan, although at the end of the day the character is pretty much all talk and no action. In short, he does very little here.

The true villain is King Ghidorah, which brings us finally, to the monsters. After all, you don’t see a Godzilla film for the actors. You see it for the monsters. So, how do the monsters fare here?

Well, the main monsters here are Godzilla, King Ghidorah, Rodan, and Mothra, and while they are all given modern-day looks, I can’t say I was all that impressed. It sounds strange to say this, but with all our current CGI technology, I find that I prefer the old-fashioned man-in-suit monsters from Toho’s glory days. These monsters all look okay, but nothing about them I find special nor memorable.

In the Toho films, for better or for worse, the monsters, both good and bad, had personality. The monsters here have no personality. They are quite simply generic and not at all cinematic, which is a major knock against this movie, and quite frankly against the other Warner Bros. monster universe films. If the Marvel superheroes lacked similar charisma that series would have never gotten off the ground.

Also, I did not like the look of this movie at all. Most of the action takes place during various weather events and storms, and so it’s always difficult to see what the heck is going on. For example, the film’s climax takes place in Boston, and at Fenway Park specifically, and I have to say it’s one of the poorest and most fake looking interpretations of Boston I’ve ever seen in a movie. What could have been iconic and devastating is instead cartoonish and superficial.

Dougherty gives us plenty of monsters and monster battles, but since 1) the monsters didn’t look outstanding, and 2) the settings of these battles were often in storms and difficult to see, as presented here, the monsters’ presence didn’t really lift this one to great heights.

The screenplay is superficial at best. It never gives us real terror— real people are noticeably absent here—- other than the scientists and a few military types, we see no one else reacting to the monsters. The film lacks real world emotion big time.

While it attempts to be an homage to earlier films at times, like the use of the Oxygen Destroyer, a weapon from the 1954 GODZILLA, it does it all in a fleeting manner that never really gets to the heart of the matter.

Dougherty has a cast of seasoned and talented actors that make this movie better than it is,  but he doesn’t really help them out. They are in few cinematic scenes and more often than not are uttering lines of dialogue that are pretty bad.

So, where do I stand on GODZILLA: KING OF THE MONSTERS? For the most part, I did enjoy this movie, especially when watching Vera Farmiga, Millie Bobby Brown, and Kyle Chandler, but whenever Godzilla and his fellow monsters showed up, I would lose interest, and for a Godzilla movie, this is NOT a good thing.

The film is a mixed bag to be sure, and while I enjoyed it more than GODZILLA (2014), I still prefer the Toho films of old, from the 1950s, 60s, and 70s.  Now, Toho continued the Godzilla series into the 1980s, 1990s, and early 2000s, even making the critically acclaimed SHIN GODZILLA (2016), and while those films in general are okay—I like the aforementioned older ones more—, they’re about on par with this current Warner Bros. series.

The next film, GODZILLA VS. KONG, slated for release in 2020, is one that while I’m definitely interested in, based upon the Warner Bros. films so far, I can’t say I’m excited about.

So, GODZILLA: KING OF THE MONSTERS is okay, but since the best part about it is NOT Godzilla, I don’t think Godzilla himself would approve, and for me, that’s all you need to know about this one.