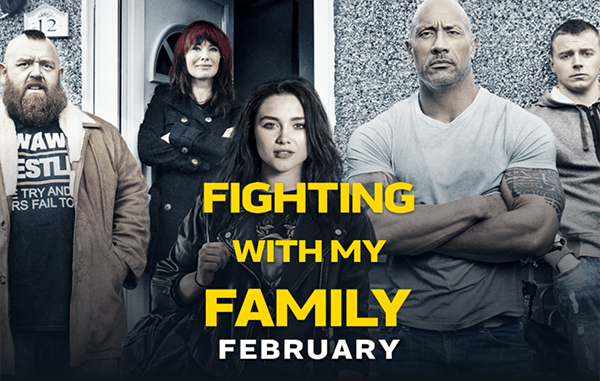 Not only is FIGHTING WITH MY FAMILY (2019) a lot of fun, not only is it a “feel good” movie with an inspiring story to tell, but it has a lot to say about those who fight for their dreams and lose, and who in turn use their talents to teach others, the message being they haven’t really lost at all as they are the reason others win.

FIGHTING WITH MY FAMILY is based on the true story of a family from Norwich, England who lived and breathed wrestling. As Ricky (Nick Frost) and Julia Knight (Lena Heady) tell it, their lives were going nowhere when they met, and as other people find religion, they found wrestling, and they made it a centerpiece of their family.

Their oldest son tried to make it professionally but failed. He couldn’t handle his failure and ended up in prison. The story focuses on their daughter Saraya (Florence Pugh) and their younger son Zak (Jack Lowden) who are primed and ready to try out for the WWE, World Wrestling Entertainment. Saraya is chosen, while Zak is not.

The film then follows Saraya on her trip to the United States, where she trains under the grueling coach Hutch (Vince Vaughn) who works her and the other recruits incredibly hard, so much so that Saraya comes to believe that she won’t make it. During this time, she chooses her wrestling name, Paige. Meanwhile, back in England, Zak struggles with his sister’s success and his own life, as he increasingly views himself as a failure.

Until one day when his older brother is finally released from prison. He tells Zak that he always knew Saraya would be the success that he himself couldn’t be because she had something he didn’t. When Zak asks his brother what that something was, he points to Zak and says: you. And it’s at that moment Zak realizes that all the work he does teaching wrestling to the neighborhood kids means something, and it has just as much value as going pro in wrestling. And as Saraya points out to her brother, “You’re teaching a blind boy how to wrestle. Who does that?” Once Zak comes to understand the value of his true talent, he turns towards helping his sister achieve her own professional dreams.

While FIGHTING WITH MY FAMILY is the story of both Knight siblings, its main focus is really on Saraya, aka Paige, as she’s the one member of the family who did succeed as a pro in wrestling. As such, most of the movie falls on the shoulders of Florence Pugh who plays Paige, and Pugh does a great job. She’s known for her work in LADY MACBETH (2016), she was in the Liam Neeson actioner THE COMMUTER (2018), and she had the lead in the AMC mini-series THE LITTLE DRUMMER GIRL (2018). Here, Pugh does a fine job capturing Paige’s feelings as an outsider, as someone who feels she doesn’t belong, which is what drove her to wrestling in the first place, that it gave her the ability to block out real life troubles while she was active in the ring. It also gave her something to belong to.

Jack Lowden is very good as Zak Knight as well, although the film does tend to focus on him less than Pugh. He plays Zak as a man who is nearly crushed by the failure of his dreams. Indeed, one of the most painful scenes in the movie is when Hutch tells Zak point-blank to give up, that it’s not going to happen for him. And Lowden is just as good later when Zak experiences the light bulb moment that his work with the youth in his neighborhood is his real talent.

Nick Frost , who has co-starred with Simon Pegg in British comedies like THE WORLD’S END (2013), HOT FUZZ (2007), and SHAUN OF THE DEAD (2004) is as expected very funny as the lively patriarch of the Knight family. He gets most of the best laugh-out-loud moments in the film, like when he answers the phone and doesn’t believe he’s really talking to Dwayne “the Rock” Johnson on the other line, when in fact he is. But he also enjoys some key dramatic moments as well, like when he takes Paige aside and tells her that it’s okay if she doesn’t want to continue training for the WWE, that he’s not going to force her to do something she doesn’t want to do.

Lena Headey rounds out the main players as Knight matriarch Julia. She works well with Nick Frost, and the two play a couple whose passion for wrestling is plain to see, and as such, it’s easy to understand how their children are so inspired to participate in the sport.

I have to admit. I’ve never been a Vince Vaughn fan,  but he’s really good here as wrestling coach Hutch. Sure, you can argue that you’ve seen this character countless times before, that he’s just another variation of Mickey (Burgess Meredith) from the ROCKY movies, but there’s an added element that makes him stand out, and it’s this added element which Vaughn nails. Hutch’s story ties in to Zak’s, as he too once had his dreams shattered, and he too found that his true talent was in helping and teaching others to achieve theirs. And there’s a key moment near the end, when Hutch gives Paige a quick wink and then walks away. He’s not about sharing in her glory. What drives him is inspiring other to achieve theirs.

Of course, the biggest name attached to FIGHTING WITH MY FAMILY is Dwayne Johnson, who does appear as himself in the movie, and while he has a couple of memorable scenes, this really isn’t a Dwayne Johnson movie. It’s an ensemble piece, led by Florence Pugh.

FIGHTING WITH MY FAMILY has a first-rate script by writer/director Stephen Merchant. While the main plot comes right out of any ROCKY movie— underdog makes it big— the tone of this film is anything but, as the humor is all very British, and as such, you’ll spend a lot of time laughing throughout the movie, which comes as no surprise. Merchant worked as a writer for both the British and American versions of the TV show THE OFFICE.

Merchant’s also an actor, and he appears here in a memorable supporting role as the father of Zak’s girlfriend. Merchant also starred as Caliban in LOGAN (2017) with Hugh Jackman

Here, the script is lively and comedic, and better yet, it does a fine job tying its themes together, its stories of youth fighting for their dreams, of how to react when you fail, and the value of teaching others, and how that’s also something that not a lot of people can do, and if you have this gift, use it.

Merchant also succeeds as a director here. FIGHTING WITH MY FAMILY wastes no time getting into the heart of its story, as within the first few minutes of the film the audience has already joined Zak and Paige on their quest to become pro-wrestlers. The pace remains brisk throughout, and the film does a comprehensive job telling the story of the Knight family, people who at the end of the day you are glad you met and spent a couple of hours with.

The messages that come out of this film are good ones as they have less to do with competition and more to do with how to be a winner, as it’s not about stomping on those around you to reach the top but lifting up those around you to reach the top together. People do not succeed alone. You need others to help you, and this film is both about those who give help and those who receive it, and it shows how both groups are intertwined. People who receive help give it back, and vice versa. No one gets without giving.

I really enjoyed FIGHTING WITH MY FAMILY. This one’s not getting a lot of hype, but it’s definitely a movie worth checking out at the theater.

FIGHTING WITH MY FAMILY fights the good fight, and its message on the value of teaching and inspiring others to achieve their dreams is a welcomed one in this day and age which all too often glorifies a winning-at-the-expense-of others mentality.