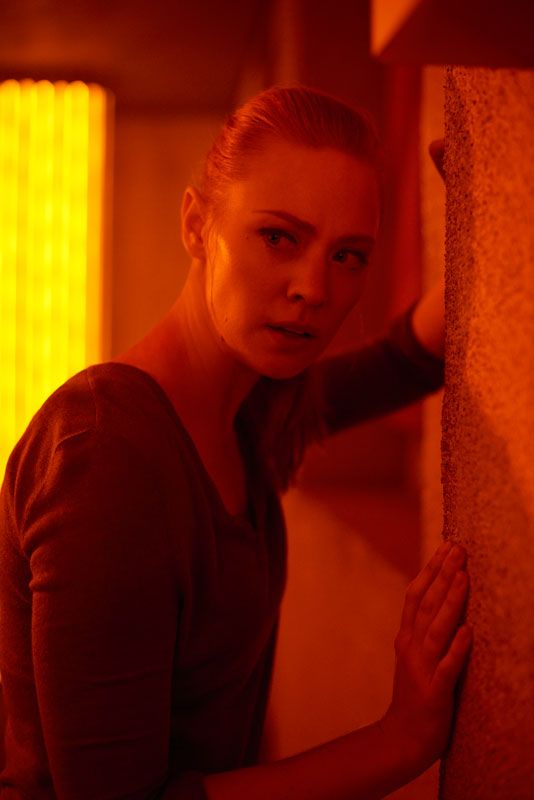 I wasn’t expecting much from ESCAPE ROOM (2019), the new “solve the puzzle or you die” thriller that clearly has eyes on becoming a franchise. Critics haven’t been kind to it, and word of mouth has been mute.

But in spite of a boneheaded opening and very contrived ending, ESCAPE ROOM was easily better than I expected.

ESCAPE ROOM opens with a supposed harrowing sequence of a young man Ben Miller (Logan Miller) desperately seeking clues inside a room that is quickly closing in on him, and he’s in danger of being crushed to death unless he can find whatever it is he’s looking for. Since we know absolutely nothing about this character, this opening sequence is just okay and is hardly an exciting way to open the movie.

The action jumps backwards several days, and we meet a group of characters who all receive a strange cube for various reasons inviting them to take part in an escape room puzzle game that will put them in a room with seemingly no escape. If they can figure their way out, they win $10,000.

There’s main character Zoey Davis (Taylor Russell) an extremely introverted college student whose professor advises her to take more risks in life, and to start by doing something that is out of her comfort zone over the Thanksgiving break. We also meet Ben Miller, a young man who’s sort of a loser and is struggling even to keep his grocery store job. Of course, we met Miller in the opening sequence, giving away any suspense as to his fate since we know he’ll survive long enough to reach the collapsing room, which is why I called the opening sequence boneheaded.

At first, they’re all pretty excited to play, except for Amanda who seems to sense something is wrong from the outset, and something is wrong, because it doesn’t take these folks long to realize that it isn’t a game but is real. If they don’t escape from each room, they die, and once they start being killed, the intensity ratchets up.

The main reason ESCAPE ROOM works as well as it does is its cast, which creates amiable characters who in spite of their flaws are folks you easily feel comfortable rooting for.

Taylor Russell is excellent in the lead role of Zoey Davis. She’s convincing as an introvert who later on must channel her energies to survive and help her new friends to do the same. Russell was also memorable as Judy Robinson in the Netflix reboot of LOST IN SPACE (2018-2019). She is a young actress to keep your eye on.

Logan Miller is very good as socially challenged Ben Miller, and his performance keeps the audience from ever really disliking a character who could have been very annoying. Miller has also appeared on TV’s THE WALKING DEAD.

Jay Ellis is sufficiently cold and driven as winner-take-all stock broker Jason Walker, and Deborah Ann Woll adds a lot of depth to her Iraq-war veteran character Amanda Harper. I’m a big fan of Woll’s work on the Netflix Marvel shows DAREDEVIL (2015-18), THE PUNISHER (2017-2019) and THE DEFENDERS (2017) where she has the recurring role of Karen Page. In fact, the main reason I wanted to see ESCAPE ROOM was because of Deborah Ann Woll.

Tyler Labine does a nice job as Mike Nolan, while Nik Dodani plays the one character Danny Khan who’s sadly reduced to being a cliché.

Most of the escape rooms in the film are pretty creative, and the sequences where the characters need to escape or die are generally exciting, although they never approach seat-squirming levels. It’s all pretty neat and safe, but it’s not dull, and with these actors in the roles I really did care for them and wanted to see them survive.

The screenplay by Bragi F. Schut and Maria Melnik works for the most part. Its strength is it creates likable characters and gives them realistic dialogue. It wisely avoids giving away answers— the biggest question being who is doing this and why?— until the end, and that’s where things dip a bit.

The idea of characters having to escape a series of deadly rooms works best in the abstract. It all makes for thrilling cinema until the moment arrives when it’s time for some answers. Who is doing this? Why? How? And these answers are far more difficult to come up with while keeping the story realistic. I can’t say the writers really succeeded here.

And the set up for a sequel is by far the most contrived part of the movie and the least believable. It’s also the weakest part of the film.

But before this I thought director Adam Robitel did a nice job keeping things suspenseful. I certainly enjoyed ESCAPE ROOM more than I did Robitel’s previous directorial effort, the dreadful INSIDIOUS:THE LAST KEY (2018).

The story itself here is secondary to the plight of the characters trying to escape the rooms, and that’s the best part of this enjoyable thriller. For most of the film, you don’t know why this is happening, but you also don’t really care. The characters are fleshed out enough so that you care about them.

And sometimes for a movie to work, that’s all you need.

One thought on “ESCAPE ROOM (2019) – Puzzle Thriller Better Than Expected”