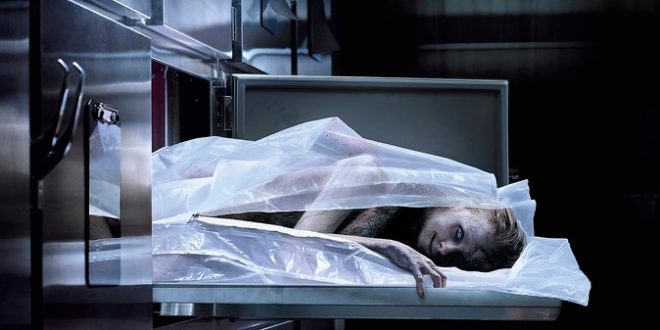 THE POSSESSION OF HANNAH GRACE (2018) opens with yet another ridiculous exorcism scene. You know the ones I’m talking about.  Priests are praying, a young girl contorts her body while a deep demonic voice from within her spews trash talk, a father cries, and special effects are flying faster than you can say George Lucas meets Walt Disney.

THE EXORCIST, it ain’t.

But at the end of the scene, when the demon boasts that the girl will be his forever, her father decides that  no, that’s not going to happen, and he suffocates his daughter to death.  And I thought, okay, this is different.

And so in one moment the film goes from being yet another demonic possession rehash to a somewhat different take on the tired trope.  What’s different is that in this movie Hannah Grace is a possessed corpse.

THE POSSESSION OF HANNAH GRACE actually tells two stories, the one about Hannah Grace, which makes up the horror elements here, and the better story, about main character Megan Reed (Shay Mitchell) a former Boston police officer who panicked and froze in the line of duty and as a result allowed her partner to be shot and killed. It’s a tragedy she hasn’t recovered from yet. She has since left the police force and as the movie opens has decided to take a quiet position working the overnight shift at the city morgue.

What those ideas include are sneaking out of the morgue drawer to murder people in order to heal her body and come back to life, I guess to allow the demon to continue his evil handiwork.  Not sure why the demon just doesn’t enter someone else’s body, but maybe he just likes Hannah Grace. The horror story here doesn’t really make much sense, but nonetheless, it was somewhat entertaining in a mindless sort of way.

As I said, Megan’s storyline is much better.  Since her partner’s death, she has been struggling with depression and substance abuse, and so when she tries to tell her friends and co-workers that something very wrong is happening inside the morgue, and a body seems to be regenerating, they tell her that these things she thinks she’s seeing are simply the result of her trauma.  No one believes her until, of course, it’s too late.

While THE POSSESSION OF HANNAH GRACE is not a great horror movie— it’s not even a very good one— I did enjoy it much more than I thought I would, and that’s because of Megan’s story. In effect, while not being a great horror movie, it isn’t a half bad drama.

The rest of the cast acquits itself well and helps to keep this one much better than it should be.  Nick Thune stands out as quirky ambulance driver Randy who’s one of the first people to believe Megan.  Grey Damon holds his own as fellow cop and Megan’s former boyfriend Andrew who tries his best not to be a jerk but isn’t alway successful, and through it all continues to care for Megan.  Likewise, Stana Katic does a nice job as Megan’s friend Lisa. And Kirby Johnson gets the thankless role of Hannah Grace, spending the majority of the movie as a corpse.

The screenplay by Brian Sieve, except for the opening exorcism scene, spares us bad dialogue and cliché characters.  The characters are fleshed out rather well here, especially Megan, and the dialogue is authentic and realistic.  The story is also interesting throughout.

One of the characters points out that strangely in spite of killing lots of people, Hannah has not killed Megan, and he asks why? Which is a good question, and is one I don’t think the movie properly answers.  Is the demon saving her for its next host? Dunno.  Or is it somehow Hannah who’s keeping her alive knowing that Megan has the gumption to destroy her body once and for all? Again, the movie doesn’t say, which is another reason why, at the end of the day, it’s not a great horror movie.

But it is a surprisingly decent screenplay, and it’s well-directed.

Director Diederik Van Rooijen spares us any long boring scenes of characters walking along empty corridors in search of trouble, and he does a nice job avoiding other clichés as well.  Some of the horror elements aren’t bad.  Hannah Grace likes to scurry along dark corridors low to the ground like a giant arachnid, and these scenes are somewhat creepy and caused some audience members to cry out in discomfort.

Yet THE POSSESSION OF HANNAH GRACE is watchable because it presents the possession story from a different angle, a possessed corpse, and it works. Up to a point.

What doesn’t work is the film isn’t really all that scary, and in spite of its R rating, it doesn’t really go for the throat in the horror department.  Hannah Grace spends most of the film as a naked corpse, but rather than look horrifying she looks cartoonish and fake, and that’s because she’s mostly seen as a nude CGI creation. She looks more like Gollum than a teenage girl.

THE POSSESSION OF HANNAH GRACE could have been a lot worse, but it stays clear of the worst clichés of the demonic possession movies, and it offers both an interesting tale of a possessed corpse hungry for victims, and a very captivating story of a young woman struggling to overcome a traumatic event from her past who finds herself battling a demon in the dark confines of a city morgue.

Sure, it could have been scarier, more hard-hitting, and more raw, but at the end of the day, THE POSSESSION OF HANNAH GRACE is a halfway decent thriller that had it only gone for the throat a bit more often would have been a notable horror movie as well.