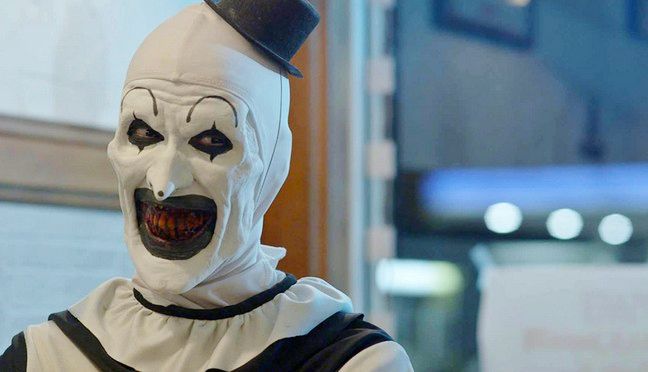 TERRIFIER (2017) is the type of horror movie I usually do not like.

It’s also the type, in general, that tends to give horror a bad name and keeps a large audience away from horror movies. Why do I want to pay money to see victims brutally murdered? Gore for gore’s sake. No story. No point other than to kill off victims.

TERRIFIER is this type of movie— up to a point. It’s violent and sick, until it morphs into something more, something I found myself ultimately liking. A lot.

TERRIFIER starts off as the story of two friends, Tara (Jenna Kanell) and Dawn (Catherine Corcoran) out on the town for a night of drinks and fun. As they drunkenly return to their car, they notice someone watching them from down the street, a man dressed as a clown. When he follows them into a restaurant, Tara is understandably freaked out, but Dawn thinks it’s funny and actually flirts with and takes a selfie with the clown (David Howard Thornton).

Tara wants to leave immediately, but Dawn says no, that they should stay. You should have listened to Tara.

It turns out that Art the Clown is a homicidal maniac who goes about killing anyone and everyone in his path in the most brutal sadistic ways. And yes, he is definitely interested in adding Dawn and Tara to his victims’ list.

So, why is this movie better than just an exercise in mindless blood and gore?

For starters, before the killings begin, the acting by the principal players is pretty darn good. I really enjoyed both Jenna Kanell as Tara and Catherine Corcoran as Dawn. Kanell was good enough to be the strong heroine in a new series of horror films, and I was certainly interested in following her story and wanting her not only to survive but to kick Art the Clown’s butt.

But the filmmakers had other ideas.

Speaking of Art the Clown, he is one creepy clown. As played by David Howard Thornton, he is downright nightmarish. Thornton does a fantastic job at making Art the Clown completely unpredictable. At times, he stares at his victims with menacing homicidal eyes, and others he’s in his full clown routine, acting jolly and silly, and at other times he’s sad. He can unleash any of these personalities at any time, and once he attacks, he becomes a brutal insane killer.

Bottom line, he is terribly frightening, which is exactly what you want in a horror movie.

So, when this movie began, I thought, regardless of how it plays out, I like this clown.

Midway through, for me, TERRIFIER hit rock bottom. Suddenly Art the Clown becomes a killing machine, and deaths occur without rhyme or reason.  Gore for gore’s sake. And yet, there was that creepy clown, still standing, still terrorizing.

And that for me was when the movie changed, when the realization hit me that this wasn’t the story of any of the victims at all. Instead, this was Art the Clown’s story. In this movie, nobody was safe, no matter how much the audience might like them, no matter how heroic their intentions, no matter when they first appeared in the movie.  None of this mattered. They were going to have to deal with the clown, and most likely, they were not going to come out on top.

I thought this was a bold decision by writer/director Damien Leone, to really go all in with Art the Clown and say nobody is safe, and because Art the Clown was such a captivating and menacing character, this decision worked here.  The clown, as vicious as he was, carried this movie.

He got under my skin, and as a horror fan, I’m glad he did.  And when I realized that Damien Leone was not going to make any safe decisions with this one, that here was a time where evil was going to win out, I thought, this film is really working as an exercise in visceral terror.

And so while it may have seemed for a bit to be simply a gore for gore’s sake kinda film, it really isn’t. It really creates a cinematic monster in Art the Clown, this unstoppable insane killer.

This is not the first movie for Art the Clown. He first appeared in ALL HALLOW’S EVE (2013), another horror movie by writer/director Damien Leon, although the character was played by a different actor. I have not seen ALL HALLOW’S EVE, but after watching TERRIFIER, I intend to.

I enjoyed Leon’s work here, both as a director and a writer. TERRIFIER is chock full of suspenseful scenes, mostly due to the presence of Art the Clown, and the murder scenes are sufficiently bloody and grotesque. On the other hand, the dialogue and story are nothing outstanding.

Leone also wrote and directed a horror movie called FRANKENSTEIN VS. THE MUMMY (2017), inspired by the Universal Monster movies of yesteryear. I have not seen this one either, but it’s now on my list.

Back to TERRIFIER, the crowning achievement here really is the creation of Art the Clown.

I would definitely see more movies about this character in the hope that somewhere down the line someone would be able to stop him, because it would take a very special and very powerful hero to take down such a murderer, and that’s a story I’d like to see.

I don’t usually rave about ultra violent horror movies, but I thought TERRIFIER, in spite of its frequent bloody violence, fared better than most because it offered one of the creepiest clowns in the movies I’ve ever seen, and that includes Pennywise.

If you haven’t seen TERRIFIER, check it out. Be prepared to be creeped out and even grossed out, but I think you’ll agree that the presence of Art the Clown lifts this one to a level of satisfaction it has no business reaching otherwise.