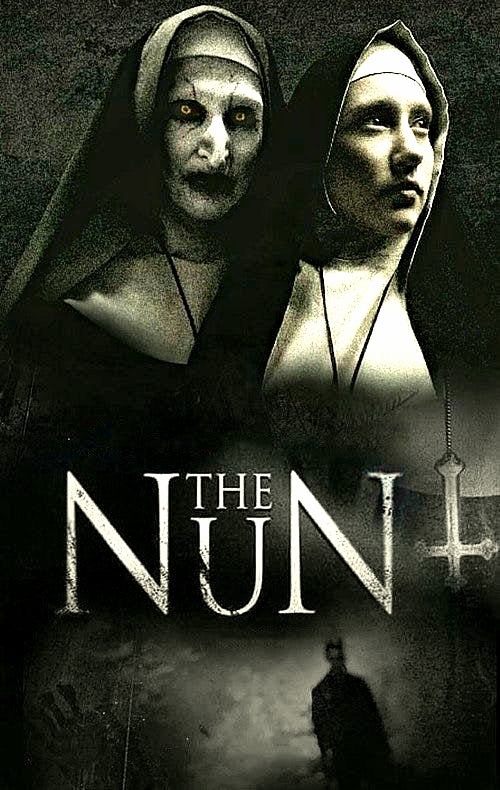 THE NUN (2018) has one major thing going for it: atmosphere.

And that’s because it was shot on location in Romania, and so you have enormous ominous castles and an Old World countryside that is ripe with superstition and evil spirits. In terms of setting, you can’t get more authentic. It’s so rich in atmosphere it brought me back to the Hammer Films of yesteryear.

And yet it’s all for naught because unfortunately, sadly, in spite of this being an atmospheric gem, the rest of the film is unbearably awful.  As in really awful.

This one would only have needed a halfway decent story, and direction that just allowed the story to flow without getting in the way, and yet the writers and director here couldn’t even do that.

THE NUN is the latest film to take place in THE CONJURING (2013) universe.  THE CONJURING of course is the well-received horror movie by director James Wan, and a film that I liked a lot, that told the story of paranormal investigators Ed and Lorraine Warren, played by Patrick Wilson and Vera Farmiga. It was followed by THE CONJURING 2 (2016) and a pair of ANNABELLE movies featuring a scary doll which first appeared in THE CONJURING.

Now we have THE NUN which features a scary demon from THE CONJURING 2  that looks like a nun.

And this nun demon which goes by the name of Valak is pretty scary looking, which is another thing this movie has going for it. This film actually has a few things going for it, which makes it all the more amazing that it’s so gosh darn awful!

The film opens in Romania in the 1950s at a cloistered abbey where we witness two nuns fighting an unseen demon. To prevent the demon from entering her body, one of the nuns hangs herself.

The action switches to the Vatican where a priest named Father Burke (Demian Bichir) is informed he’s being sent to Romania to investigate the suicide of a nun, with the implication being that there’s more going on there at the abbey because Father Burke has experience with exorcsims.  Burke is told he needs to bring a young nun with him, Sister Irene (Taissa Farmiga) because she has experienced visions, and these visions will be of help to Burke in his investigation.

In Romania, Father Burke and Sister Irene interview the young man who found the body of the hanged nun, a man who goes by the nickname Frenchie (Jonas Bloquet) because he’s French. Duh.

So, Burke, Irene, and Frenchie go to the abbey and begin the investigation, which does not go well. Why, you ask? Because there’s a demon there of course! And this demon doesn’t like people poking around in his business, and so he does all the things audiences are used to seeing demons do in horror movies: makes loud noises, makes people see things that aren’t there, jumps out at people, and generally wreaks havoc all the while giving people in the CGI business jobs.

I’ve pointed out a couple of things THE NUN did well, but now it’s time to mention the things it didn’t do too well.

Let’s start with the special effects overkill.  There’s so much going on in the special effects department I felt like I was on the Disney Haunted Mansion ride. And when this happens, it kills any authenticity the film has. I didn’t believe any of it.

The story here has a lot of problems. The screenplay by Gary Dauberman creates very dull characters without any real sense of purpose. I’m still not sure what it was exactly that Father Burke was investigating or why exactly the Vatican wanted Sister Irene to help him. Additionally, I don’t really know what this demon was all about. Why was he possessing these nuns? It’s not like he’s actively trying to leave the abbey.  Is he a demon-homemaker who just wants to be left alone?

And the characters here have zero depth and are all rather boring.

Demian Bichir, an actor I generally enjoy, looks serious as Father Burke, and he definitely carries himself with some presence, but he’s about as interesting as a rosary bead.

The far more interesting bit of casting is Taissa Farmiga as Sister Irene. Farmiga is the younger sister of Vera Farmiga, who played Lorraine Warren in THE CONJURING movies. Hmm. THE NUN takes place before the events in THE CONJURING, and here we have a character Sister Irene, who because she is played by Vera Farmiga’s sister, bears a strong resemblance to the Lorraine Warren character. Would there, I wondered, be some sort of connection between the two? In other words, would the filmmakers have used this potentially ingenious bit of casting to the story’s advantage?

So much for that.

Anyway, Taissa Farmiga is very good as Sister Irene, but again, I didn’t know much about the character or understand what her visions had to do with the story being told here in this movie.

THE NUN was directed by Corin Hardy, and I can’t say that I was impressed.  The scares were practically nonexistent, and the pacing poor. For a film that clocked in at just over 90 minutes, it felt much longer than that, especially during its second half. It also featured far too many special CGI effects which did nothing but detract from its storyline.

The other thing I did like was the music score by Abel Korzeniowski, which certainly captured the whole possessed abbey feel with lots of religious undertones. You could almost see the chanting monks hovering in the damp dark corridors. Korzeniowski also composed the music for the PENNY DREADFUL (2014-16) TV show.

THE NUN actually gets off to a good start. The on-location shooting in Romania combined with Abel Korzeniowski’s effective music score easily lured me into the proceedings. And upon first meeting Father Burke and Sister Irene, and buying into the performances of Demian Bichir and Taissa Farmiga, I was definitely interested in joining them on their investigation into the mysterious occurrences at the haunted abbey.

But this investigation only led to lots quiet moments searching dark corridors and hallways, with ghostly encounters that made little sense, and demonic confrontations that featured over-the-top CGI effects that were anything but scary, and some pretty awful dialogue.

Yes, when it became apparent about two-thirds of the way through this one that its story wasn’t going anywhere, the film simply lost my interest and became flat-out dull and boring, which is too bad, because it really looks good.

What a shame that the filmmakers went all the way to Romania to make this movie but didn’t bother to bring a decent story with them.

And I don’t know about you, but I went to see THE NUN to see a horror movie, not a Romanian travelogue.