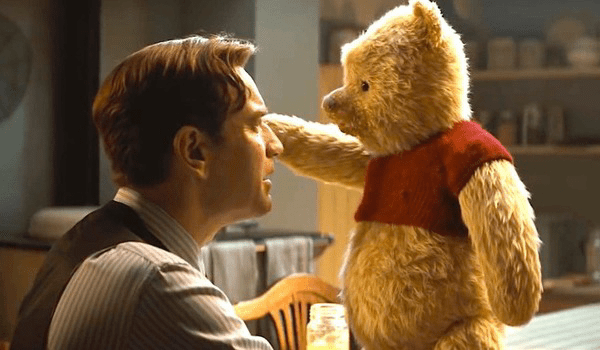 As a kid, I thoroughly enjoyed the Disney cartoons featuring Winnie the Pooh. My favorite was the short WINNIE THE POOH AND THE HONEY TREE (1966). So, I was eager to trek off to the theater to see CHRISTOPHER ROBIN (2018), a live action tale featuring a now adult Christopher Robin having one more adventure with his stuffed animal friends from the Hundred Acre Wood.

CHRISTOPHER ROBIN opens nicely, with a montage chronicling the relationship between a young Christopher Robin and his “friends” Pooh, Piglet, Tigger, Rabbit, Eeyore, Owl, Kanga and Roo. The opening sequence ends with Christopher Robin telling his playmates that it’s time for him to leave, that he needs to go off to school and grow up, and while Christopher seems perfectly at ease about this, Pooh and company are a little less so and are very sad to see the boy leave them, not fully understanding why he has to go.

The action then switches to years later where an adult Christopher Robin (Ewan McGregor) lives in London with his wife Evelyn (Hayley Atwell) and daughter Madeline (Bronte Carmichael). Things should be wonderful, but they’re not.  Christopher has a very demanding job which keeps him away from his family, and both his wife and daughter are letting him know about it.

Meanwhile, back in the Hundred Acre Wood, Pooh has had enough of missing Christopher Robin and decides to go looking for him in the outside world. When the two meet, it’s just in time for Pooh and his friends to help Christopher see the light and realize that his family  comes first.

CHRISTOPHER ROBIN looks wonderful, with its late 1940s costumes and set design, and the CGI effects on Pooh and company are flawless.  The talking stuffed animals here are sufficiently cute and cuddly.

But the plot point of a father being too busy to spend time with his family is hardly original, and since this story adds little that is new to the concept, it really works against this movie.

Plus, the story itself doesn’t hold up.

For starters, Christopher Robin is shown as a man who does love his family but unfortunately is stuck in a demanding job. It’s not as if he has the option of spending time with his family and chooses not to. He doesn’t.  If anyone needs a change of heart in this story, it’s his employer, not him.

Second, Pooh and friends don’t exactly rush to the rescue. They try to help by attempting to return to Christopher Robin the “important papers” he left behind, and when they meet Madeline they end up working together, but it’s a not a direct “rescue mission.” They do help Christopher Robin “see the light” but in a roundabout inadvertent way.

I was largely underwhelmed by CHRISTOPHER ROBIN. While I enjoyed its charm and the nostalgia of seeing Pooh and company back on-screen again, it simply wasn’t all that lively or memorable.

Director Marc Foster keeps the pace deliberate and slow, making for a rather dull movie. I’m also not quite sure who the film is marketed for. The family drama which takes up most of the movie is definitely geared more for adults, while Pooh’s story is seemingly aimed at the very young.  It’s not the kind of lively script that’s going to hold the interest of older children.

Foster also directed QUANTUM OF SOLACE (2008), the second Daniel Craig James Bond film, a movie a lot of people didn’t like, but it’s one of my favorite Craig Bonds, as well as the horror movie WORLD WAR Z (2013). CHRISTOPHER ROBIN is a far cry from these two movies, and I can’t say that I enjoyed it as much as I did SOLACE and Z.

The screenplay by Alex Ross Perry, Tom McCarthy, and Allison Schroeder is pleasant but uninspiring. Pooh and his buddies enjoy plenty of little moments but few if any big ones. The family tale of Christopher Robin trying to make time for his family largely falls flat. The result is a mixed bag of a script which tends to gravitate to the mundane, even with the majority of the characters being CGI created fluffy stuffed animals that can talk.

Ewan McGregor is okay in the lead role as the adult Christopher Robin, but he certainly didn’t wow me. In fact, the character rather bored me, and so if Christopher Robin is guilty of anything in this movie, it’s that he’s become a dull unimaginative adult rather than an overworked one, yet the script doesn’t really play up this angle.

Likewise, Hayley Atwell is just okay as Evelyn, the wife who is clearly frustrated with her busy husband and can’t seem to get through to him. Atwell is known these days as Agent Peggy Carter in some of the Marvel superhero movies and the short-lived AGENT CARTER TV series (2015-16).

In the important role of young Madeline Robin, Bronte Carmichael acquits herself well, but the character struggles to rise above the cliché.

The voice actors don’t fare all that better, except for Jim Cummings, who provides the voices of both Pooh and Tigger. Cummings has been voicing these characters for quite a while now, since the 1980s, and he does a fine job here. Pooh and Tigger were probably my two favorite characters in the movie.

CHRISTOPHER ROBIN taken as a whole was largely underwhelming. The adults in the story were dull, the main child a cliché, and the talking stuffed animals were oddly reserved and rather passive. Worse, its main story of a father who’s “lost his way” and needs to reconnect with his family doesn’t really resonate or have the desired impact. That’s because the adult Christopher Robin in this movie is not a man who now shuns his childhood imagination and replaces it with a love of work, but rather, he’s a man who’s simply too busy to recall the imagination he once had. And the realization that “hey, maybe I can be a bit less busy,” really isn’t all that dramatic or compelling.

As a result, CHRISTOPHER ROBIN is a mildly entertaining movie, best reserved for folks who enjoyed Pooh as a kid and are curious to see him on the big screen again. It should serve as a fair reunion.

I seriously doubt many new fans will emerge after watching this movie.

For me though, CHRISTOPHER ROBIN didn’t come close to satisfying my appetite for a new Pooh adventure.

Yep, there’s still a rumbly in my tumbly.