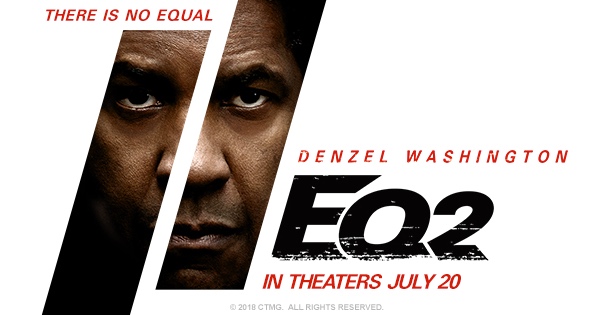 I could watch Denzel Washington all day.

The guy’s a tremendous actor, and he possesses a compelling screen persona with the ability to keep audiences riveted to everything he does and says. Of course, I’d enjoy Washington even more if he wasn’t starring in a subpar sequel to a movie that itself wasn’t so hot.

THE EQUALIZER (2014) was an okay movie that was loosely based on the old TV show of the same name starring Edward Woodward, which ran from 1985-1989. In the movie, Denzel impressed in the lead role, but the film itself was rather average.

Now comes the sequel THE EQUALIZER 2 (2018) which is less than average.

Director Antoine Fuqua, who directed the first movie, returns to helm this sequel.  Fuqua is a talented director with plenty of credits to his name, including TRAINING DAY (2001) which won Denzel Washington a Best Actor Oscar. That being said, I wasn’t all that crazy about Fuqua’s previous movie, the remake of THE MAGNIFICENT SEVEN (2016), which also starred Denzel. And I’m not too crazy about THE EQUALIZER 2, although Fuqua’s direction isn’t the main problem with this one.

THE EQUALIZER 2 opens with an entertaining enough sequence, on a train, where we are re-acquainted with main character Robert McCall (Denzel Washington) as we see him do what he does best: handily beat up a bunch of bad guys and rescue a little girl who had been taken away from her mother. As opening sequences go, it’s all right, but it’s certainly not memorable, and as such, serves as the perfect table setter for the rest of the movie.

The action switches to Brussels, Belgium, where we witness a brutal execution of a man and his wife. After that, the setting jumps to Boston, where McCall is currently working as a Lyft driver, and we get to see him interacting with his passengers. Interestingly enough, some of Denzel Washington’s best scenes in this one are with with people not integral to the main crime plot. The whole subplot regarding his mentoring relationship with a young man Miles Whittaker (Ashton Sanders) from his neighborhood was my favorite part of the movie. On the contrary, the main plot of this one, regarding murder and betrayal, I found to be a snooze.

In that main plot, McCall’s friends Susan (Melissa Leo) and Brian Plummer (Bill Pullman) run afoul of some baddies with a connection to the prior murder in Brussels. Just what is that connection? Well, the bottom line is the film never really makes that clear, nor is it important. The only thing that matters here is McCall’s friends have been wronged, and one of them murdered, and so he’s on the job seeking justice for them. And while it’s certainly fun watching Denzel Washington’s character pursue this justice, it’s not enough to make THE EQUALIZER 2 a worthwhile movie.

The screenplay by Richard Wenk does a nice job with Denzel’s character, as we know and understand what he is all about.  The character’s issues with OCD also add to the mix, as rather than a hindrance, this anxiety seems to help McCall focus when fighting his enemies. The dialogue is also very good, especially in the aforementioned scenes between McCall and Miles.

But the main plot is way too underdeveloped to have any impact. It’s all very shadowy, and the story does not supply the necessary answers to its questions. It’s the old plot of the former government assassin thrown out to pasture and so to make ends meet he has to kill for private contracts and not be too choosy as to who he kills. This is all well and good, but the film doesn’t really get into the folks who are doing the hiring and so we don’t know why any of these people are being killed.

DirectorAntoine Fuqua does an okay job here.  The fight scenes are polished and well-choreographed, but none of them blew me away. The entire movie takes place as a hurricane bears down upon the east coast, and it hits just in time for the film’s climax. I’m not exactly sure of the relevance of the stormy atmosphere, other than it sets the tone for the story’s volatile proceedings. Don’t see this movie expecting to see sunshine. But other than this the hurricane doesn’t add much to the story.

THE EQUALIZER 2 marks the first time Fuqua has directed a sequel.

Likewise, it’s also the first sequel for Denzel Washington. I really enjoyed Washington here. Like I said at the outset, he has that gift for making whoever he plays on screen be very compelling, to the point where you can’t stop watching him. And even though he’s 63, he still makes the violent exploits of Robert McCall believable, and that’s because Fuqua does a nice job keeping his action scenes believable. We don’t see McCall running around all over the place like he’s 25 years old. He moves like he’s 63. It’s just that when he moves, he’s deadly.  Okay, he moves like an incredibly agile and swift 63 year-old! At least his upper body does. Like I said, he’s not racing through the streets like the Flash.

Ashton Sanders [MOONLIGHT (2016)] is also very good as Miles Whittaker, the young man McCall pretty much takes under his wing. Again, this part of the movie was my favorite, and the scenes between Washington and Sanders were the best scenes in the movie, so good in fact that they deserve a better story than the one here. It’s a shame that THE EQUALIZER 2 wasn’t about McCall and Whittaker.

Both Melissa Leo and Bill Pullman are wasted in small throwaway roles as McCall’s friends, the ones he has to seek justice for. Leo and Pullman are reprising their roles from the first film.

The movie also suffers from not having a decent villain. The main villain, Dave (Pedro Pascal) is one of McCall’s former partners, and for most of the film we don’t even know he’s the bad guy, although truth be told, it’s not much of a twist.  I could tell early on that this guy was bad news. The character just doesn’t resonate.

And it’s too bad because Denzel Washington is so good as Robert McCall. He deserves a formiddable foe. But he doesn’t get one in this movie.

THE EQUALIZER 2 is a largely forgettable sequel.  Fans of Denzel Washington probably will not be disappointed, because Washington is indeed excellent in this one, but on his own he’s not enough, even with some fine support from Ashton Sanders, to make me recommend this movie.