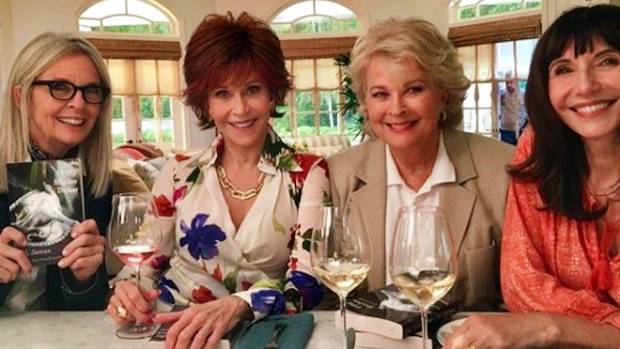 First of all, even if this movie had been bad, I still would have been impressed with its star power.

I mean, you have Jane Fonda, Diane Keaton, Candice Bergen, and Mary Steenburgen sharing equal time as the four lead characters in BOOK CLUB (2018), a charming tale of four lifelong friends who still get together once a month for their book club meetings and who decide to spice up their lives by reading Fifty Shades of Grey.

But I’ll cut to the chase and get to the good news, which is BOOK CLUB is not a bad movie. In fact, it’s quite the opposite.  It’s a really good movie.

Diane (Diane Keaton), Vivian (Jane Fonda), Sharon (Candice Bergen) and Carol (Mary Steenburgen) are all feeling old. They decide to shake things up a bit by reading the novel Fifty Shades of Grey by E.L. James for their monthly book read, and soon their conversations turn to sex. It’s a subject that’s on all their minds, but at their age, they simply don’t feel comfortable talking about it or even thinking about it. Reading the novel changes all that for them.

Carol tries to spice up her love life with her husband Bruce (Craig T. Nelson) who has only just recently retired and just doesn’t seem himself lately. The sequence where Carol secretly slips some Viagra into his drink and their subsequent argument in their car which leads to them being pulled over by the police is one of the funnier bits in the film.

Vivian becomes reacquainted with an old boyfriend Arthur (Don Johnson), while Diane, whose husband had recently passed away, meets a pilot Mitchell (Andy Garcia) who’s very much interested in her. And Sharon, a federal judge who believes she’s way past the age of dating, is egged on by her friends to get back into the game, especially when she learns her ex-husband is marrying a young woman who’s the same age as their son. Sharon enters the world of online dating, which leads her to meet a friendly accountant George (Richard Dreyfuss).

All of these stories work well, which is no surprise when you consider the quality of the actors involved here.  But BOOK CLUB is more than just fine acting.  It also has a very good screenplay by Bill Holderman, who directed, and Erin Simms.  It’s witty and honest, and the comedy here isn’t ridiculous or silly, but sincere and heartfelt.  And you definitely will laugh while watching this one.

But having four amazing actresses in the movie certainly doesn’t hurt, and all four are well worth the price of admission.

First of all, Jane Fonda looks absolutely amazing. She’s 81 years old, but you wouldn’t know it by looking at her. She looks twenty years younger.

I’ve had a crush on Diane Keaton ever since ANNIE HALL (1976) and after seeing BOOK CLUB I think I still have a crush on her. She exudes intellectual sexiness. Her story in BOOK CLUB is probably the one that is most developed of the four.  The sequence where she first meets Mitchell on a plane is laugh out loud funny,

Once they start dating, they have strong feelings for each other, but Diane feels like she needs to be committed to her two adult daughters, and she feels if she were involved in a relationship so soon after their father’s death it would hurt them, but Mitchell makes the case that it’s okay for her to be happy.  Keaton and Andy Garcia share some of the movie’s best scenes together, and they enjoy a strong onscreen chemistry.

One part of Diane’s story that didn’t work for me was her relationship with her two adult daughters.  They treat Diane like she’s 90 years old, as they worry about her living alone and want her to move to Arizona to live with them.  This seemed unrealistic to me since Diane seemed quite capable of living on her own.

Mary Steenburgen and Craig T. Nelson succeed as the long married couple Carol and Bruce who in spite of their recent difficulties really do still love each other, and this comes out beautifully in their performances.

Candice Bergen’s scenes are also very funny as she tries to navigate the world of online dating, like when she inadvertently takes a photo of herself with her computer camera while she’s wearing a facial mask. Her scenes with Richard Dreyfuss are also quite good.

Andy Garcia is excellent as Mitchell, the pilot who falls easily in love with Diane.  It’s probably the best Garcia performance I’ve seen in years.

Craig T. Nelson is equally as good as Carol’s husband Bruce. One of his best scenes is when he explains his recent moods to Carol, saying that his retirement left him very scared about what there was left to do in his life, and it shook him badly, which is another good example of the sincerity of the screenplay.

I really enjoyed BOOK CLUB, from the acting of all involved, to the funny and sincere script, to the cinematography, as there are some very picturesque shots of the skyline around Mitchell’s home in Arizona.

The film also does well with its theme, that we are not meant to be alone.  It’s Jane Fonda’s Vivian, probably the most successful of the four, who continually tries to make the argument to the contrary, citing that she knows how all relationships end, and so she is perfectly happy to ignore them and live her life without them. But when she meets Arthur again, she realizes that in spite of all her success as an independent woman, she’s missing something in her life.

For Diane, it’s the validation that it’s okay to be happy, that she doesn’t have to stay in mourning over the death of her husband in order to respect her daughters’ feelings.

Sharon learns that it’s never too late to start dating, and Carol discovers that being married to the same man for years upon years doesn’t have to take away from their sex life.  It just takes communication.

I laughed a lot during BOOK CLUB, as did the decent sized audience I saw it with.

BOOK CLUB is a witty look at four successful senior women who start off having some fun talking about sex for the first time in a while and then find themselves using these conversations as a springboard to re-connect with members of the opposite sex, something they didn’t think was still possible for women their age.

It tells an uplifting and very funny story that will have you laughing throughout in this very amiable comedy by Bill Holderman featuring four powerhouse actresses, Jane Fonda, Diane Keaton, Candice Bergen, and Mary Steenburgen.