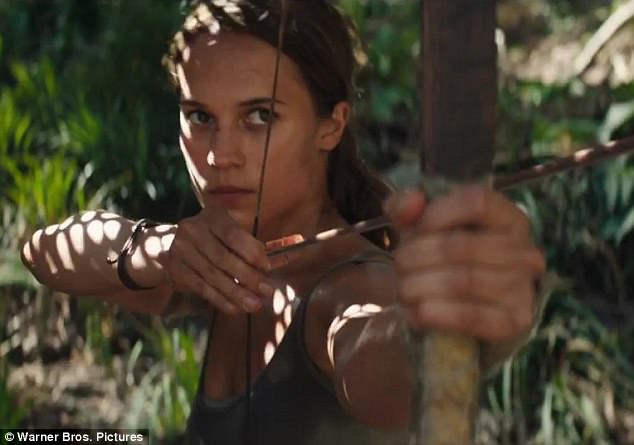 I’m not into video games, so I haven’t been a fan of the Lara Croft video game character, I haven’t seen any of the earlier movies with Angelina Jolie, and I could give a care that this reboot presented an origin tale for the character. I could have easily skipped this one.

And Vikander is playing Lara Croft here.  So, I asked myself, how many times have I ventured to the theater to see a low-regarded action film starring a Sylvester Stallone or an Arnold Schwarzenegger over the years just because they were in the movie? Plenty. So, why shouldn’t I do the same for a female actor?  I couldn’t come up with a good answer.  With that in mind, I decided to check out TOMB RAIDER, starring Alicia Vikander.

I wish I could tell you that it was all worth it, and the film was great, but it’s not.  But you know what? It’s not awful, either.  In fact, it’s a halfway decent movie, if your bar isn’t set too high.

And the reason it’s watchable is Alicia Vikander. If you’re going to see this one, she’s the reason to do so.

Twenty one year-old Lara Croft (Alicia Vikander) is having a tough time of it.  She’s working as a bike courier in London, scraping together just enough money to live on, even though she’s heir to a fortune.  All she has to do is sign the papers which declare her missing father Lord Richard Croft (Dominic West) legally dead, and the company and all its assets are hers, but she declines, because she refuses to believe that her father is really dead.  He disappeared seven years earlier somewhere in Hong Kong.

However, when informed that unless she signs the papers, her father’s entire fortune will be lost, she relents and agrees to sign, but just as she is about to do so, she discovers a secret note to her from her father.  The note leads her to a secret room containing her father’s secret work, as a researcher into the supernatural. When he disappeared, he was actively searching for a mythical Japanese witch who it turns out is so dangerous, that the message he left for Lara was for her to destroy all his notes so no one will be able to misuse the witch’s power.  But Lara being the strong-willed woman that she is, decides instead to use this newfound information to seek out and learn the fate of her missing dad.

So, she travels to Hong Kong in search of the man who took her father to the mysterious island home of the witch, and instead finds his son Lu Ren (Daniel Wu) who nonetheless agrees to take Lara to the island.  There, they are captured by the villainous Mathias Vogel (Walton Goggins) who is running a slave labor camp in an ongoing attempt to locate the tomb of this all-powerful supernatural demon queen.  He’s overjoyed to meet Lara because he finds in her belongings her father’s notes which will lead him at long last to the hidden tomb.

But Lara has other ideas.

In terms of story, the one that TOMB RAIDER tells is completely ridiculous and silly. I didn’t believe any of it.  By far, the main plot involving the search for the demonic queen/witch is the weakest part of the film. That being said, the screenplay by Geneva Robertson-Dworet and Alastair Siddons is not awful.  It does some things right.

For example, it downplays the supernatural.  The whole demonic queen aspect of this story is ludicrous and one thing I could never wrap my head around was why these folks were so darned interested in her.  The story never really makes that clear, and as a result, this one had the potential to be a goofy mess.  But it’s not, because as we learn more about this queen, it’s revealed that she’s not all that supernatural.  In fact, she’s not supernatural at all, but that doesn’t mean she’s not deadly.  It’s a twist in the story I really liked.

Also, early on, the tale is grounded in reality.  A lot of time is spent on Lara’s life in London, and this gritty part of the story works well.  The film takes its time before it gets to all the RAIDERS OF THE LOST ARK treasure hunting stuff, and with Alicia Vikander in the lead, the film doesn’t suffer at all for its patient storytelling.

As I said, the best part of TOMB RAIDER is Alicia Vikander’s performance as Lara Croft. I’ve always enjoyed Vikander’s work, ever since I first saw her in EX MACHINA (2014), and she was just as memorable in THE MAN FROM U.N.C.L.E. (2015) and JASON BOURNE (2016).  And of course she won the Ocscar for Best Performance by an Actress in a Supporting Role for THE DANISH GIRL (2016).

The story here might be ludicrous, but Vikander makes Lara Croft completely believable.  She brings her energetic spunky personality to life, and she’s as tough as nails.  She looks completely believable in the role, as she’s lean and mean, and she gets to take part in some really cool fight scenes.

Vikander is so good in the role, that even though I have had no interest in the Lara Croft character, I would easily be happy to see Vikander play the role again, hopefully in a movie with a better plot.  She’s that good. Is she up there with Gal Gadot as Wonder Woman? In terms of the entire package, no, but in terms of individual performances, yes. Vikander carries this movie in much the same way that Gadot carried WONDER WOMAN (2017), which might be more impressive since Vikander has less help, in terms of cast, production values, and writers.

The supporting cast in TOMB RAIDER is okay.  Walton Goggins is the biggest standout here other than Vikander as the villain, Mathias Vogel. Goggins makes evil look so effortless, but that doesn’t make him any less impressive.   The best thing about his performance is that he makes Vogel real.  He’s surrounded by silly story elements, but Vogel could have walked off the set of THE WALKING DEAD- he’s that type of bad guy. You don’t want to mess with him. All this comes as no surprise, as Goggins has been a highlight of a bunch of recent movies, including DJANGO UNCHAINED (2012) and THE HATEFUL EIGHT (2015).

Daniel Wu is likable as Lu Ren, although his character is stuck in a thankless sidekick role.

I was less impressed with Dominic West as Lord Richard Croft, who just never came to life for me.  He seemed like a stock character from a 1980s soap opera, that handsome lead who disappears from the show for six months and then turns up later on a deserted island.

And veteran actors Kristin Scott Thomas and Derek Jacobi have small roles, mostly appearing in the Croft board room.

TOMB RAIDER was directed by Norwegian director Roar Uthaug, and he does a decent job. The fight scenes involving Alicia Vikander are all first-rate, and they’re pretty intense and compelling.  Of course, the film is rated PG-13, and so the skirmishes never get as grueling and dirty as they should have been.

There’s also a couple of really cool scenes, one in particular involving Lara and the wreckage of a plane that is right out of an Indiana Jones movie.  Lara is fighting through a raging river, trying to avoid a massive waterfall when she seeks refuge inside the wreckage of a plane precariously hanging on to the edge of the fall. It’s a scene that is well-staged and is one of the more intense sequences in the film.

There’s also a bicycle chase through the streets of East London that is well done, although it’s early on in the film and much lighter in tone than the later sequences. And all of the hand to hand battles which Lara engages in are well worth the price of admission.

On the flip side, things tend to slow down a bit towards the end, and the film does struggle to get through its 1 hour and 58 minute running time.  Also, the very end, which sets up an obvious sequel, is forced and contrived.

That being said, TOMB RAIDER is much better than it has any business being, and the number one reason for this is Alicia Vikander.  With this movie, she makes the Lara Croft character her own.

It’s a decent movie, lifted by a spirited performance by Alicia Vikander as Lara Croft, and it has a competent script, and features some energetic directing by Roar Uthaug. It’s not going to make my list of best movies of the year, but for a film I had zero interest in, it’s not all that bad.

If you’ve never seen Alicia Vikander, or you have seen her and you’re a fan, either way, she’s the reason you should see TOMB RAIDER.