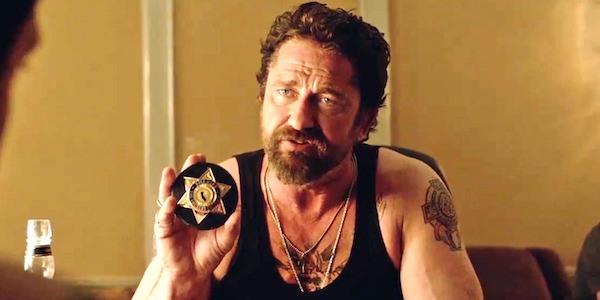 DEN OF THIEVES (2018), the new action movie starring Gerard Butler, is a gritty violent bank heist tale that plays it “safe”— heh heh— with its by- the- numbers storytelling.

Worse yet, it’s rather derivative of previous movies of this type, a formula that prevents it from being all that memorable.

DEN OF THIEVES opens with the statement that Los Angeles, California is the bank robbery capital of the world, and then goes on to tell the story of two very different groups.  There’s the elite unit of the L.A. County Sheriff’s Department led by tough guy cop Nick Flanagan (Gerard Butler) who tells a man he’s interrogating that they don’t arrest people, they kill them, so he’d better talk. Yup, Flanagan and his team break all the rules to get the job done.

The other group, of course, is the bank robbers, led by a mastermind who goes by the name of Merriman (Pablo Schreiber) whose plan in this movie is to rob the one bank that no one’s been able to rob, the Federal Reserve. And his plan is a good one, with a decent chance of success, unless Flanagan and his team can figure it out and stop him first.

And that’s pretty much the story of DEN OF THIEVES. And while there are plenty of characters on both sides, on Flanagan’s team and in Merriman’s crew, the film mostly focuses on Flanagan and Merriman, with the exception of one other character, the driver for Merriman’s group, Donnie (O’Shea Jackson Jr.) who Flanagan and his men pick up, work over, and use as their insider to learn what Merriman is up to.  Of course, it works both ways, because once Merriman finds out, he uses Donnie to feed Flanagan false information.

As I said, DEN OF THIEVES is gritty and full of testosterone.  If you like your movies full of aggressive ripped characters, with barely a female character in sight, then this is the film for you.  Now, I like action movies as much as the next guy, but the biggest problem with DEN OF THIEVES is just how derivative it is.  It borrows heavily from other action films of this type, most notably Michael Mann’s HEAT (1995) starring Al Pacino and Robert De Niro, a film I happen to like a lot. It borrows heavily from other films as well, including THE USUAL SUSPECTS (1995).  As a result, nothing that happens in the film is all that refreshing or original.

While DEN OF THIEVES isn’t a straight remake of HEAT, its plot is basically the same. The characters’ names have been changed, and their situations are a bit different, but the story of unconventional cop vs. mastermind bank robber is identical.  And HEAT did a better job with its characterizations.

In DEN OF THIEVES, the characters really aren’t fleshed out at all.  We learn a little bit about Flanagan’s home life, as he is in the midst of a divorce, separating him from his two daughters, and we see him very upset about this.  But what we don’t see is how this affects him on the job.  You’d think he’d be in a really bad mood after being served divorce papers, and he might take it out on the bank robbers, but he must be good at repressing these feelings because they hardly affect him at all, the result being a one note performance by Gerard Butler: tough and mean, all the time.  I actually had to laugh the first time we find out Flanagan has a wife and two young daughters.  Watching this guy chain smoke, eat donuts and basically look like he’s heart attack waiting to happen, the last thing I expected was to find out that he was a family man.

First-time director Christian Gudegast, who also wrote the screenplay, does a better job behind the camera than at the keyboard. The action scenes here are decent, and a couple of high speed chase scenes satisfy, but the characterizations are thin, the dialogue basic, and the entire tale unoriginal.

Gudegast is the son of actor Eric Braeden, known to genre fans for his appearances in such films as ESCAPE FROM THE PLANET OF THE APES (1971) and COLOSSUS: THE FORBIN PROJECT (1970).  He also played the werewolf in the episode “The Werewolf” of the TV show KOLCHAK: THE NIGHT STALKER (1974) starring Darren McGaven as everyone’s favorite reporter/monster hunter Carl Kolchak.  Braedon’s also known for his work on the daytime soap opera, THE YOUNG AND THE RESTLESS.

Braeden appears here in DEN OF THIEVES in a small role.

The acting here is decent.  I enjoyed Gerard Butler as tough guy cop Nick Flanagan, even if he was a very unlikable character.  Pablo Schreiber is also convincing as Merriman, but the problem is we know less about Merriman than we do Flanagan, so neither one of these two characters, in spite of the acting performances by the actors, have much depth.

Probably the best performance in the film belongs to O’Shea Jackson Jr. as driver Donnie. He’s not only convincing to the audience, but to Flanagan and Merriman as well, both of whom decide to keep him alive when he tells them he knows nothing of what the other side is doing.  Donnie is the one character when he’s on-screen who you are curious about since you’re not quite sure what he’s really up to— an innocent driver, undercover cop, or something else?  It’s a good performance by Jackson, Jr., who is the son of rapper Ice Cube.

And while there are plenty of other folks on both sides, no one really stands out. 50 Cent looks tough as fellow bank robber Levi, but we learn nothing about him.  And for fans of THE WALKING DEAD, another baddie, Mack, is played by Cooper Andrews, who last season played Jerry, King Ezekiel’s loyal right hand man, on the popular AMC show.

DEN OF THIEVES is a decent action movie, but unfortunately it’s just not original enough to stand out.  It also has a script that doesn’t add any depth whatsoever, and it simply doesn’t have enough going for it to sustain its 140 minute running time.

I liked it while I was watching it, but five minutes after it was done, it was all easily forgotten.