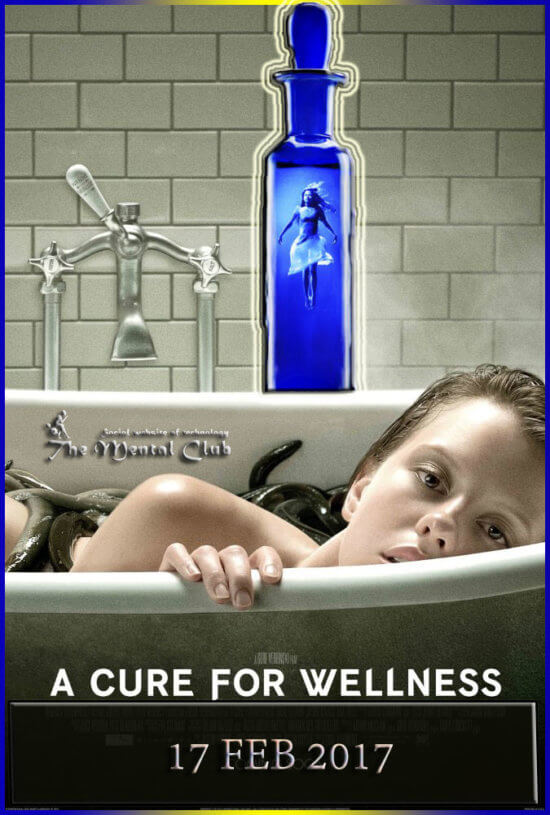 But first, four honorable mentions, movies that didn’t make my Top 5 list but that I enjoyed all the same:  SPLIT, ANNABELLE: CREATION, ALIEN:  COVENANT, and PERSONAL SHOPPER.

IT (2017), the latest film adaptation of a Stephen King novel, does what King stories do best: it creates believable characters, puts them in harm’s way, and then makes you squirm as they fight for their lives. IT is a very good movie that actually works better as a drama about a group of friends dealing with the threats in their lives than as a straight horror movie because it’s not really that scary.  Its scariest scene might be its first scene, where young Georgie first encounters Pennywise in the sewer.  This is a frightening sequence, a great way to start the film, and while Pennywise does have some decent moments later, none are quite as potent as this first one.

Bill Skarsgard’s performance as Pennywise here in the 2017 version was good enough to make me forget about Tim Curry while I watched this movie.  Taken as a whole, I thought this new version was better than the 1990 TV rendition. The driving force behind this 2017 movie is Bill and his friends, both the way they are written and the way they are acted.

The child actors are all excellent, and they’re the part of the story that for me, works best in this film adaptation of IT. 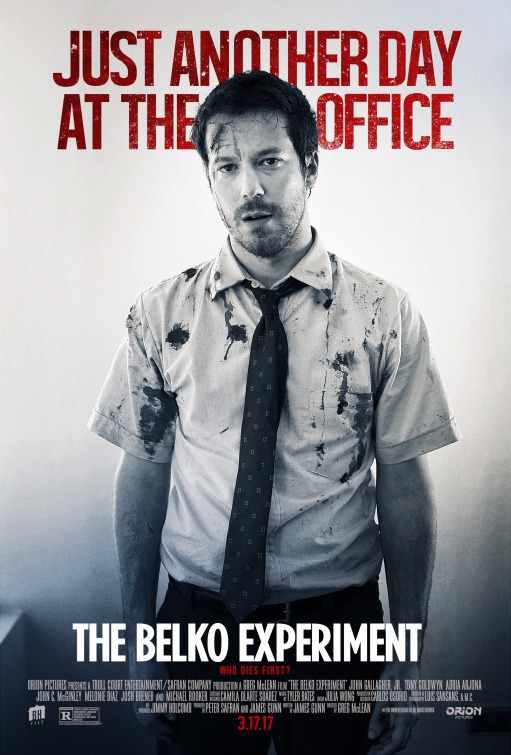 How low can humanity go? For instance, would you willingly commit murder to save the lives of those around you? That’s one of the questions asked in THE BELKO EXPERIMENT (2017), a new horror movie by director Greg McLean and screenwriter James Gunn, the man who wrote the insanely entertaining Marvel superhero movie GUARDIANS OF THE GALAXY (2014).

THE BELKO EXPERIMENT is a quick efficient thriller that grabs you within the first few minutes and never lets you go, a hard-hitting actioner that remains intense from beginning to end. Director Greg McLean makes this one lean and mean.  It clocks in at a mere 88 minutes. There’s no fat here.

THE BELKO EXPERIMENT isn’t going to win any awards for being a deep and thought-provoking drama, but it is a heck of a thriller, an intense horror movie that makes its point.  It’s also quite violent, although it is not a gore-for-gore’s sake movie. In terms of intensity, it reminded me a lot of AMC’s THE WALKING DEAD, only without the zombies. And while there’s nothing in this film as painfully disturbing as the infamous Neegan scene in THE WALKING DEAD, the film does capture the horror people feel at being helpless in a situation in which they have no control.

3 IT COMES AT NIGHT

IT COMES AT NIGHT (2017) is everything that the rebooted THE MUMMY (2017) is not. It’s simple in its execution, it’s believable, it’s frightening, and its depiction of horror on the big screen is as pure as it gets.  The only thing the two films have in common is they opened on the same weekend.

IT COMES AT NIGHT takes place during a time when some unknown disease has crippled the world, thrusting people into heavy-duty survival mode.  We follow two families sharing one house as they try to survive in this apocalyptic world, never knowing how much to trust each other. IT COMES AT NIGHT is an example of movie making at its finest.  Writer/director Trey Edward Shults has taken a simple straightforward story and made it compelling and frightening, without gimmicks or special effects. A walk into the surrounding woods at night is a sweat-inducing experience.  The camera stays in close with the characters, who we get to know and care for. Solid cast, led by Joel Edgerton. Riley Keough is also memorable. And Kelvin Harrison Jr. stands out as Travis, the innocent young man who has to see and live through these horrors.

If you like your horror pure and simple, without convoluted stories or  overblown special effects or gratuitous blood and gore, if you simply like to be scared, and to watch a story about characters you care about thrown into a situation which puts them in extreme danger, then IT COMES AT NIGHT is the movie for you.

2 A CURE FOR WELLNESS

A CURE FOR WELLNESS is an interesting hybrid— at times, it’s highbrow artistry, imbuing the screen with unsettling and bizarre images, while at others it’s a straightforward mystery melodrama, eventually morphing into an atmospheric horror tale reminiscent of the old style Hammer Films.

A young business executive named Lockhart (Dane DeHaan) is sent by his company to the Swiss Alps to retrieve the company’s CEO from a wellness center.  The spa is a beautiful castle in the Alps, the seemingly perfect location for people to get away from it all.  When Lockhart arrives, he finds it inhabited by elderly people who are there seeking a “cure” for their problems, people who have spent their lives working and as a result their bodies are broken and sick.  The spa, with its purifying water, offers a cure to these maladies and promises to restore its occupants to full health.

Lockhart isn’t interested in any of this and just wants his boss back.  The head of the center Dr. Volmer (Jason Isaacs)  tells Lockhart that Mr. Pembroke is in the middle of a treatment, but if Lockhart returns later that evening he will be able to see him.  But Lockhart is involved in a car accident and finds himself recuperating as a patient at the spa, and that’s when all the trouble starts.

A CURE FOR WELLNESS is full of powerful images that are both bizarre and unsettling. The film throws a lot at you and gives you much more to chew on than your average thriller. It’s also a compelling mystery. And as the film becomes more of a straightforward melodrama towards the end, it takes on the look inside this elegant castle of the period piece Hammer Films of yesteryear.  A CURE FOR WELLNESS is a thought-provoking and very chilling movie experience.

The best part of GET OUT is that it is so unlike most other horror movies today. It uses as its canvas a true-to-life story about the awkwardness and difficulties of a mixed race relationship which serves as a springboard to a genuine tale of horror.  In the world of horror movies, it’s a breath of fresh air.

In GET OUT, an African-American young man Chris Washington (Daniel Kaluuya) travels with his white girlfriend Rose Armitage (Allison Williams) to meet her parents for the first time.  Even though Rose promises that her parents are not racist, Chris still has reservations about the weekend.  He knows how difficult these things can be. In this case, he has no idea.

Written and directed by first time director Jordan Peele, known more for his work as a comedic actor, GET OUT strikes a nice balance between drama, horror, and even some comedy.  The script is excellent.  The dialogue is spot on, especially for Chris, as he processes what is going on, at first taking everything in stride, then becoming somewhat suspicious, and eventually getting into full steam red flag mode.

And the film doesn’t skimp on the horror.  When we finally learn what is going on, it’s a decent reveal and is a natural progression on everything that has come before it.  It doesn’t come out of left field. GET OUT is a refreshing horror movie, one that moves away from the standard horror movie tropes we so often see, and I for one was happy for it.