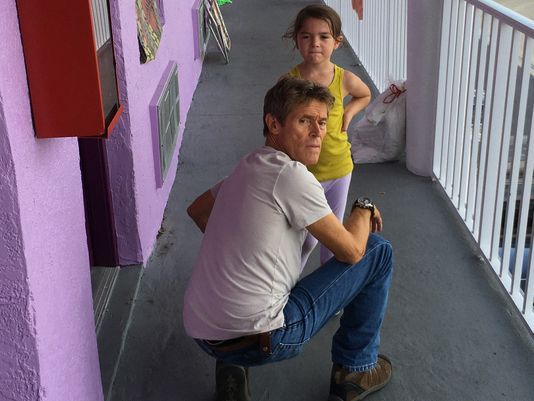 Willem Dafoe and young Brooklyn Prince in THE FLORIDA PROJECT (2017).

If I were to tell you that THE FLORIDA PROJECT (2017) was about life at a Florida motel that housed low-income and out of work families and immigrants, as seen through the eyes of a six year-old girl and her friends, you probably wouldn’t be rushing out the door to your local theater to see this one.

And if I told you it was rated R and starred Willem Dafoe, you’d probably be scratching your head saying, “Whaaat?” because that’s exactly what I did when I first heard about this movie.

But what I heard was all good, and being a fan of Willem Dafoe, I decided to check this one out, and I’m glad I did.

THE FLORIDA PROJECT takes place at The Magic Castle motel in Kissimmee, Florida, just outside of Orlando, and it caters both to tourists visiting Disney World and to low-income families.  Six year-old Moonnee (Brooklynn Prince) lives at the motel with her mom Halley (Bria Vinaite), who’s on welfare. They and other families in similar situations are allowed to live there because the motel manager Bobby (Willem Dafoe) knows they have nowhere else to live, and he has a soft spot for them, especially the children.

The film takes place over one summer where we mostly follow Moonnee and her friends doing what most kids do over the summer, hanging out and getting into mischief, but it’s also the story of Moonnee’s mom Halley, who due to her work situation will never win a mother of the year award, yet she is certainly a caring mother, just not in the traditional sense.  It’s also the story of motel manager Bobby, who really looks out for these folks, and we catch a glimpse as to why he’s so soft-hearted towards the kids, as his adult son Jack (Caleb Landry Jones) helps out around the motel and through their conversations we learn that Bobby’s family life has long since ended, and it’s just these occasional moments with his son that he has left.

But the driving force behind THE FLORIDA PROJECT is Moonnee and her young friends. The film truly captures the essence of childhood, from innocence to devilish endeavors, like when the children are giving people the finger and spitting on cars.  There are a lot of precious moments in this movie, like when Moonnee is giving her friend Jancey (Valeria Cotto) a tour of the motel and tells her, “These are the rooms we’re not supposed to go in. Let’s go in any ways!”

And when she’s trying to get free ice cream and approaches a woman outside the ice cream stand and says, “Excuse me, could you give us some change? The doctor said we have asthma and have to eat ice cream right away!”

Writer/director Sean Baker, who co-wrote the script with Chris Bergoch, imbues this movie with authenticity.  With up-close hand-held camera work, the movie has the feel of a documentary.  Baker also does a phenomenal job with the child actors, as they are amazing and pretty much steal this movie. He also captures the feel of Florida, as you can almost feel the humid heat and smell the acrid air.  More importantly, he’s masterful at telling these folks’ stories.

Again, the children steal this movie, led by Brooklyn Prince as Moonnee. Her exchanges with the understanding yet increasingly frustrated Bobby are worth the price of admission alone. You wouldn’t know their lives were difficult, because they have so much fun in and around the motel.  Kids being kids, and there are some truly hilarious moments, like when they shut the power off at the motel, much to Bobby’s chagrin.

There are also serious moments, like when they are playing in some nearby abandoned homes and start a fire which burns them down. They are also in one very brief yet poignant scene which serves as a metaphor for the entire story.  Moonnee and Jancey are sitting by a tree, and Moonnee says, “You know why this is my favorite tree? ‘Cause it’s tipped over and it’s still growing.” And then we see a shot of the fallen tree, indeed on its side but still alive, a metaphor for the broken lives of the folks in this movie.  They’re fallen, too, but they continue to live, grow, and endure.

Young Valeria Cotto as Moonnee’s friend Jancey is also a joy to watch, and it’s fun to see the two become closer friends as the summer goes on.  And Cotto’s best scene may be her last one, when she sees Moonnee breaking down for the first time.  No spoilers here, but the film ends on a strong note.

As much as I enjoyed the kids here, I thought Bria Vinaite was phenomenal as Moonnee’s mom Halley.  Again, the word “authentic” comes to mind.  Vinaite completely loses herself in this part and becomes Halley.  It’s a spot-on performance. And she really is a caring mother.  Everything we see her do in this movie is for her daughter, even if most of it is flat-out sketchy and oftentimes illegal.  But desperate people do desperate things, and she has a six year-old daughter, and she’s got no job and no money.  You do what you have to do.

I also really enjoyed Willem Dafoe as Bobby.  It was fun to see him cast against type, as he plays a sensitive caring guy who is always there for these people in his quiet unassuming way.  One of his best scenes is when he spies a weird man talking to the kids when they’re playing across from the parking lot, and so he approaches the man and— well, it’s another scene that is worth the price of admission.

Dafoe recently had a small role in Kenneth Branagh’s MURDER ON THE ORIENT EXPRESS (2017), a film that largely wasted Dafoe and the rest of the cast of A-list actors.  If you want to see a top-notch actor like Dafoe strut his stuff in a movie, THE FLORIDA PROJECT is the movie for you.  Like everything else about this movie, Dafoe’s performance as Bobby the motel manager comes off as wonderfully authentic.

You might not be hearing much about THE FLORIDA PROJECT, but it’s a film that you definitely do not want to miss, especially in the here and now, where it’s no secret that in the United States the chasm between the haves and the have-nots continues to widen at a tragically alarming rate.

The children in THE FLORIDA PROJECT remind us why it is so important that this trend be reversed.