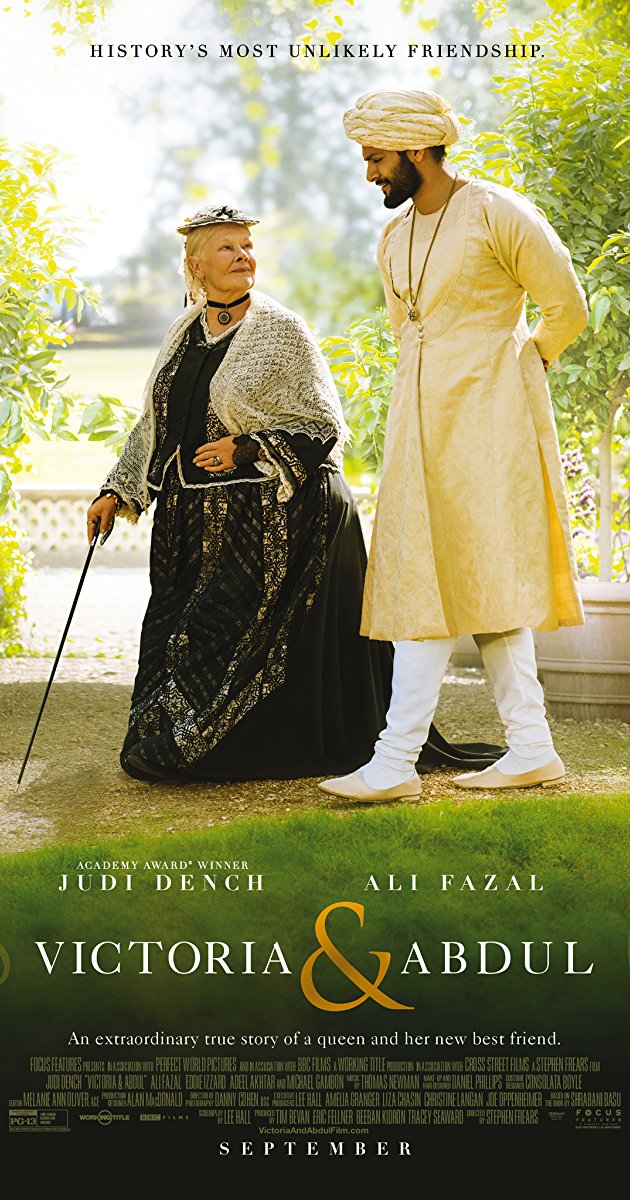 There’s a funny line in VICTORIA AND ABDUL (2017) where Queen Victoria (Judi Dench) receives a mango from her entourage, and hearing her friend Abdul’s comments about the fruit, tells them, “This mango is off.”

The same can be said for the movie itself.  It starts off well, but as it goes along, I couldn’t help but notice it was all just a little “off.”

VICTORIA AND ABDUL (2017) begins playfully, as the first words on the screen are “Based on real events—- mostly.”  Good for a chuckle, it’s the first of many humorous moments during the movie’s first half.

It’s 1887, and Queen Victoria has been ruling for fifty years.  She’s pretty much bored to death with all the ceremonies and pomp and circumstance which surround her life. Enter Abdul Karim (Ali Fazal), an Indian clerk who has been sent to present her with a ceremonial coin, a gift from the queen’s colony in India.  The queen notices Abdul, later quips that she found him terribly handsome, and the next thing Abdul knows he’s invited back.  Soon, Victoria is taking to speaking to Abdul privately.  Bored with her life, she is fascinated by his fresh positive outlook on life, and she even makes him her “Munshi,” a spiritual advisor.

These decisions absolutely enrage the officials surrounding the queen, including her whining son Bertie, the Prince of Wales (Eddie Izzard). It doesn’t take long for the plots to begin, plots to remove Abdul from the Queen’s confidence.  And it’s here where the film started to lose me.

The relationship between Victoria and Abdul is quite charming at first, but as the story goes along, it becomes less so because the movie does not give its audience reasons to really understand why this relationship is so important to them.  In terms of the queen, sure, she finds her life boring, and Abdul is like a breath of fresh air, and this works at first, but it only goes so far.  Abdul’s motives are far less understood.  In fact, of all the characters in the movie, he’s probably developed the least.

And then there’s the undercurrent of racism and imperialism.  The British officials disdain Abdul mostly because he is an Indian peasant, and they look down at him throughout the movie.  While this keeps the story real and relevant, it also doesn’t really mesh all that well with the lighter, fun tone of Victoria and Abdul’s friendship.  As the movie moves forward, the ugly imperial undertones grow stronger while the witty friendship tale reverts into the background, paving the way for Abdul’s eventual fate. The film does not end the way it begins.  In fact, the ending seems like quite the different movie.

I saw VICTORIA AND ABDUL because of Judi Dench, and she does not disappoint one iota.  She delivers a solid performance as Queen Victoria, and she is the main reason to see this movie.

I was less impressed with Ali Fazal as Abdul.  There was just something less real about Abdul than pretty much all of the other characters, and I believe the fault is a combination of the acting and the writing.  I just never really understood what Abdul really wanted.  Supposedly, in real life, he used his relationship with Victoria to be a voice for Muslims and their rights, but that kind of motivation is absent from this movie.

But the supporting cast here is very good. Adeel Akhtar, who was also memorable earlier this year in a supporting role in THE BIG SICK (2017), plays another Indian peasant named Mohammed who also meets the Queen with Abdul.  Early on, Mohammed provides plenty of comic relief as he criticizes what he sees as the barbaric English society, and later, he has one of the better dramatic moments in the film when he rejects the British officials’ plea to him to help them get rid of Abdul.

The recently deceased Tim Pigott-Smith is excellent as Sir Henry Ponsonby, the queen’s long-suffering handler who receives most of the pressure for not being able to rid the royal household of Abdul.  Eddie Izzard is both comical and menacing as Victoria’s whiny son Bertie.

Then there’s Michael Gambon as Lord Salisbury, Paul Higgins as the queen’s personal physician, Dr. Reid, and Olivia Williams as Lady Churchill, who all can’t wait to rid themselves of Abdul.  They all give very effective performances.  And Simon Callow even show up in a comical bit as the famed singer Puccini.

Stephen Frears directed VICTORIA AND ABDUL, and in terms of period piece photography, there aren’t any complaints here.  The film looks terrific.  The pacing is a bit slow, and while naturally entertaining, it doesn’t really take advantage of its more powerful moments.  The disturbing parts of the story are not explored as deeply as they could have been. Frears has had a long and successful directorial career, from films like MY BEAUTIFUL LAUNDRETTE (1985) to THE QUEEN (2006).

Lee Hall wrote the screenplay, based on the book by Shrabani Basu.  Early on, the humor works, but I never completely understood the relationship between Victoria and Abdul, mostly because I didn’t get a good sense of Abdul’s background and motivations.

And later, when things grow ugly, events just happen without there being much thought or reaction to them.  Again, it comes down to Abdul.  When things go badly for him near the end, his thoughts and feelings barely register.

VICTORIA AND ABDUL is a fairly entertaining movie.  Judi Dench gives a professional performance as Queen Victoria, and she’s aided by a strong supporting cast.  But there’s more to this story than just a lighthearted friendship between two unlikely friends. There’s a tale of racism and imperialism, but the film barely explores these darker more cynical parts of the narrative.  They’re there, but they remain superficial.

As does the entire movie.