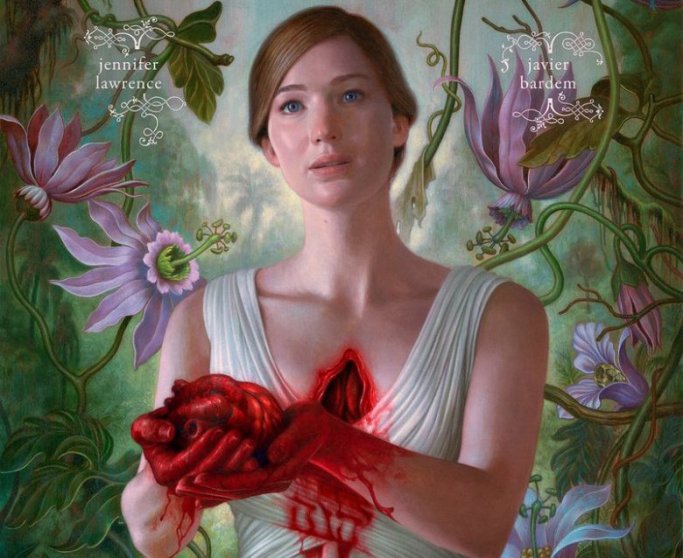 MOTHER! (2017), the latest movie by writer/director Darren Aronofsky, is an ambitious and thought-provoking film that serves as a metaphor for our ever-increasing narcissistic culture that not only breeds and encourages narcissists but the radical zealots who follow them.

There’s a lot going on here, most of it not that easy to digest or decipher, and since the trailer for this movie makes it look like a modern-day ROSEMARY’S BABY, which it is not, I’m guessing there’s going to be a whole lot of disappointed moviegoers out there who decide to see this movie.  It’s not really a horror movie, in the traditional sense.

But that shouldn’t stop you from seeing this one.  Any time a movie makes you think and think hard, and goes about its storytelling in a way that is creative and out of the ordinary, that’s a good thing.  MOTHER! is a good thing.  It’s just not going to appeal to a wide audience.

MOTHER! tells a straightforward story.  A woman (Jennifer Lawrence) lives in her quiet dreamhouse with her author husband (Javier Bardem) who’s stuck in a writer’s funk and has been struggling to produce new material.  One night, a man (Ed Harris) shows up at their door, and to the woman’s surprise, her husband invites the man to stay the night.  It turns out that the man is a huge fan, and this pleases the author to no end.  Soon, the man’s wife (Michelle Pfeiffer) arrives as well, and naturally, she’s invited to stay, too.

Things happen that result in more people showing up, people who make the woman uncomfortable, because this isn’t what she expects.  She wants her life in her house with her husband, but yet her husband is fine with opening up their house to these guests. She grows more distressed as more people arrive.  And later, when a lot of people come in, all hell breaks loose.

In terms of plot, the story is constructed very well, or at least the first half is, anyway. When Ed Harris and Michelle Pfeiffer arrive, their arrival makes perfect sense. Likewise, when many of their family members join them, that also makes perfect sense. So, it’s not as if the audience is sitting there scratching their heads wondering why these people are there.  It strikes Jennifer Lawrence’s character as strange, but when Javier Bardem’s character explains things to her, we in the audience understand.

Later, in the second half of the movie, the film deviates from a straightforward plot and enters into the realm of pure metaphor.  And it’s here where the film will no doubt lose most of its audience.

But through it all, it remains truthful and has a lot to say.

First of all, this is not a good movie for authors who want to get married, because if there’s one message that comes through loud and clear, it’s what it’s like to be married to an author.  Now, this isn’t the point of the movie, but it’s certainly one of the parts I liked, because there’s truth behind it.

Javier Bardem captures what it’s like to be a writer.  You can see it in his face when he can’t produce, and alternatively, you can see him light up when the ideas come to him and when his fans tell him how much they like his work. The bottom line is for this character,  life is always about him and his work.  His wife, though he says he loves her and indeed acts like he loves her, is always secondary.  Jennifer Lawrence has a great line when she says that he never really loved her, and that he only loved the fact that she loved him.  A telling and truthful moment.

But MOTHER! is much more than a story about an author.  Javier Bardem’s husband character is a narcissist.  He’s driven by the attention he receives from his adoring fans. In the movie, it begins with the simple conversation between his character and the Ed Harris character, who admits to being a fan and who says “your words changed my life.” From there it grows, slowly at first, until during the second half of the movie it becomes full-blown insanity.

In the second half of the movie, people come to the house because they are fans, and it’s here that the plot becomes secondary and the metaphoric elements of the film take over. We see varying degrees of fandom, but most are radical followers.  The film then serves us images which are religious, militant, violent, and flat-out horrific.

In a nutshell, the film shows what life is like living with a narcissist.  But, more than that, the images at the end  of the movie, of violence, hatred, of opposing sides clashing, easily brought to my mind images that we have seen on the news of events here in the U.S. in 2017, which for me, lifted this movie to another level, because what I took from it by the end, was that it’s a metaphor for what life is like when you elect a narcissist.

But not all of the movie works.  I had an issue with the pacing.  It runs at about two hours long, and there were times midway through where it felt longer than that.

Jennifer Lawrence is fine as the young mother here, in a role where she spends most of the film barefoot and pregnant.  And since this movie is called MOTHER! after all, her character is the one audiences will identify with the most. The story is seen through her eyes, and so when she is upset about the things that are going on, the audience is right there with her. And by the time you get to the end, with all the different sides going at each other, she’s the one who’s hurt the most. She becomes the victim of both her husband’s actions and inactions.

I was more impressed with Javier Bardem as the author/husband, who always seemed to make sense when he spoke to his wife, yet at the same time it was maddening to watch him pretty much ignore his wife’s needs.

Ed Harris and Michelle Pfeiffer add fine support in their roles as the annoying intrusive couple, especially Pfeiffer who exudes a coldness that really fits with the movie.  But Harris is just as good, as the more emotional half of this couple.

The rest of the cast is secondary.

The main guy here is writer/director Darren Aronofsky, who’s mostly known for the movie BLACK SWAN (2010), a dark movie that was well received and that I liked well enough.  Previous to MOTHER!, he wrote and directed NOAH  (2014), a re-telling of the Noah and the Ark story, starring Russell Crowe as Noah which tried to turn Noah into an action hero.  It was a misfire, but I actually enjoyed it.

MOTHER! is a film that most folks are simply not going to enjoy.  It’s not your standard horror movie or drama, and it becomes highly symbolic during its second half which is bound to turn off lots of viewers.

But I liked it.  It has a lot to say about narcissism in our culture, both about those who desire and command attention, and about those who relentlessly become their “followers.”

Better yet, it tells the truth, even when that truth is ugly and repugnant.