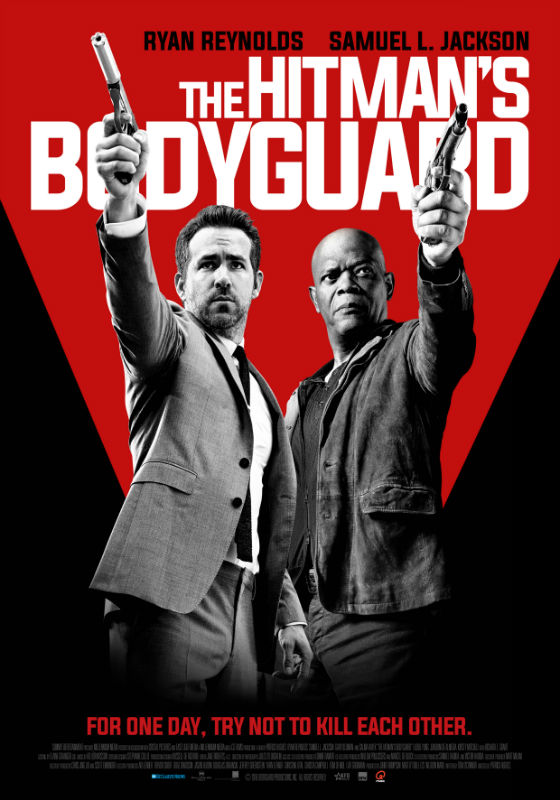 THE HITMAN’S BODYGUARD (2017),  a new action comedy starring Ryan Reynolds and Samuel L. Jackson, reminded me a lot of the buddy comedies from the 1980s.  You know the ones I’m talking about.  Films that paired the likes of Eddie Murphy and Nick Nolte, Mel Gibson and Danny Glover, and even James Belushi and Arnold Schwarzenegger.

It’s slick, violent, and hopelessly forced and stupid, yet that didn’t stop me from laughing.

I had no business liking this movie as much as I did.

Michael Bryce (Ryan Reynolds) is one of the most sought-after bodyguards on the planet, but that all changes in the opening sequence in the movie when his client is shot dead by an unseen assassin in front of Michael’s eyes.  Two years later Michael is down on his luck, unable to restore his reputation as one of the world’s best bodyguards.  However, that’s about to change.

A deadly Russian official Vladislav Dukhovich (Gary Oldman) is on trial, and the key witness is hitman Darius Kincaid (Samuel L. Jackson).  While en route to the international court, the motorcade transporting Kincaid is ambushed by one of Vlad’s hit squads, and while there is lots of death and destruction, Kincaid and the young woman in charge of his security detail, Amelia Roussel (Elodie Yung) escape.

Amelia suspects someone on the inside is working for Vlad, and so she turns to an outsider for help, and that would be Michael, who just happens to be her ex-boyfriend. It’s Michael’s big chance to redeem himself, to get Kincaid to court on time, as the judge has given the lawyers until 5:00 to produce their star witness.  All they have to do is survive the efforts of Vlad’s seemingly infinite supply of henchmen and assassins.

And, oh yeah, Michael and Kincaid have a past, and they hate each other.  But they put aside their differences to work together, even bonding to the point where they give each other relationship advice.

As I said, this one’s a throwback to the 80s buddy movies, where it’s all about action, swearing, and silly comedy.  The only thing missing is the obligatory nude scene. Other than this, it’s all there: guns, explosions, car chases, heroes who can’t miss and villains who can’t shoot straight.

THE HITMAN’S BODYGUARD tells as stupid a story as they come, yet it somehow works. It’s that rare example of a story that really isn’t believable, and yet the comedy works and works well.  I can’t deny that I laughed quite a bit during this movie, more than I expected to, and as a result, I liked the whole movie more than I expected, as well.

For starters, director Patrick Hughes does a nice job at the helm.  Hughes directed THE EXPENDABLES 3 (2014), which was probably my least favorite film of that Sylvester Stallone action series, a series that for the most part I’ve liked a lot.  I enjoyed THE HITMAN’S BODYGUARD more than THE EXPENDABLES 3, and one of the reasons I enjoyed it so much was in addition to the comedy, the film also does not skimp on the action.

There are some fun car chases, and one fight scene in particular between Michael and a Russian hitman that is almost as good as the memorable fight sequence in ATOMIC BLONDE (2017) from several weeks back.  While the story itself is not very believable, the action scenes are.

While I’ve always enjoyed Samuel L. Jackson, for me, his performances are often hit or miss.  His performance here as hitman Darius Kincaid is more of a hit.  I certainly enjoyed him more here than in the last couple of films I saw him in.  His role earlier this year as military man Preston Packard in KONG: SKULL ISLAND (2017) never rose above the cliché, and in last year’s THE LEGEND OF TARZAN (2016) his sympathetic George Washington Williams, while being one of the more enjoyable characters in an otherwise flat movie, was simply okay and far too reserved to make much of an impact.

Here as Darius Kincaid, Jackson lets loose.  He seems to be having an awfully good time, and he’s terribly funny.  Sure, most of the humor stems from Jackson hurling F-bombs, but that doesn’t make it any less hilarious, and Jackson is so good at capturing this type of persona.

Gary Oldman can play villains in his sleep, and his performance here as Vladislav Dukhovich is nothing we haven’t seen him do before, but like Jackson, he’s so good at it. Any film that has Oldman in the cast is going to benefit from his performance, and HITMAN’S BODYGUARD is no exception.

Elodie Yung, who played Electra in Season 2 of the Netflix TV show DAREDEVIL (2016) and who is currently reprising the role in the new Netflix Marvel show THE DEFENDERS (2017) is decent here as security agent Amelia Roussel.  She’s completely removed from the comedy and appears only in the straight action scenes in this one, and as a result she’s not in the best parts of the movie.

On the other hand, Salma Hayek has a field day as Darius’ imprisoned wife Sonia.  While all her scenes take place in her prison cell, she, like Jackson, lets loose and lets the F-bombs fly, in a funny spirited performance, a far cry from her reserved dramatic performance in BEATRIZ AT DINNER (2017) earlier this year.

The cast is excellent, and this is a good thing since the screenplay by Tom O’Connor is about as sharp as a butter knife.  The story is farfetched and simple, the characters cliché, and the humor driven by four letter words.  Yet, in this case, it somehow all works.  Again, I laughed a lot during this movie.

But the main reason for the success behind THE HITMAN’S BODYGUARD is the presence of stars Ryan Reynolds and Samuel L. Jackson.  I’m not the biggest Ryan Reynolds fan, as other than DEADPOOL (2016) I haven’t really enjoyed his movies all that much.  But he strikes the right balance here between likable guy and down on his luck bodyguard, and he makes Michael someone the audience can easily root for.

Paired with Samuel L. Jackson’s over the top larger than life unstoppable Darius Kincaid, the two actors chew up the scenery and keep things entertaining throughout.

THE HITMAN’S BODYGUARD is a movie where the sum of its parts is better than the whole, and that’s a good thing because in this case the “whole” is pretty lame-brained.

The “parts” however, are a hoot.