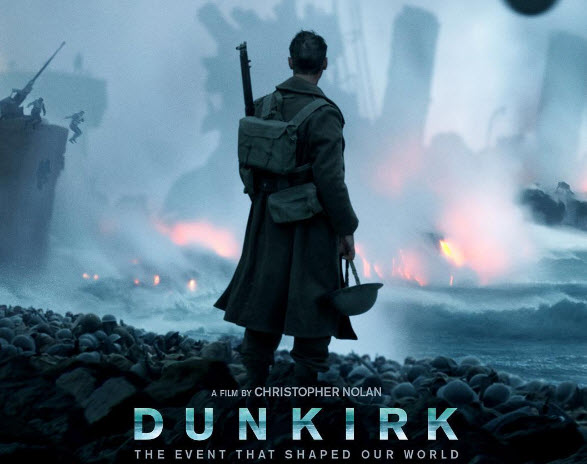 Forget everything you know about traditional storytelling.

DUNKIRK (2017), the new World War II movie by writer/director Christopher Nolan, changes the rules and then some.

As he has been known to do in the past, Christopher Nolan tells this story in a nonlinear fashion, and he does it with a minimum of dialogue and character development.  Yet, the film doesn’t suffer for it.  Nolan has called DUNKIRK his most experimental film, and I would have to agree.

In an interview, Nolan described the soldiers’ experiences at Dunkirk in three parts: those on the beach were there a week, the rescue on the water took a day, and the planes in the air had fuel for one hour.  To tell this story,  Nolan separates it into these three parts- the week on the beach, the day at sea, and the crucial hour in the air, but he does this in a nonlinear fashion, meaning all three events are shown happening concurrently and interspersed with each other.  Surprisingly, the result isn’t confusing. Instead, this bold use of time generates heightened tension and maximum suspense.

DUNKIRK tells the amazing story of the rescue of 338,000 British soldiers from the French port town of Dunkirk in events which transpired from May 26 – June 4, 1940.  The soldiers were surrounded by German forces and the only escape was by sea, which was covered by German planes.  In effect, there was no escape.

However, in what turned out to be a stroke of genius, instead of sending the navy, the British authorities sent out a call for civilian ships to go to Dunkirk, which they did and they miraculously rescued the soldiers.  The smaller civilian ships had the advantage of being able to navigate the shallow waters off the beaches of Dunkirk.  And while militarily speaking Dunkirk was a massive failure, one big surrender and escape mission, in terms of morale, it became a major turning point in the war.  Had the British soldiers been captured, Germany would have advanced, most likely on their way to a successful invasion of Great Britain.  But the soldiers escaped to fight another day, and Churchill turned the event on its head, claiming a moral victory and using it to espouse the spirit of resistance.

On land, the movie follows a young soldier Tommy (Fionn Whitehead) on the beaches of Dunkirk as he attempts with his fellow soldiers to survive long enough to be rescued.  On the sea, Mr. Dawson (Mark Rylance) and his son Peter (Tom Glynn-Carney) and Peter’s friend George (Barry Keoghan) set off in their small ship to Dunkirk to assist with the rescue.  And in the air, Farrier (Tom Hardy) and Collins (Jack Lowden) do their best to fend off the German planes long enough for the rescue to be a success.

It’s a dramatic yet simple story told in an innovative way by Christopher Nolan. While my favorite Christopher Nolan film remains THE DARK KNIGHT (2008) with INTERSTELLAR (2014) a close second, his work here on DUNKIRK rivals both these movies.

And while the opening moments of DUNKIRK are not as in-your-face horrific as the opening in SAVING PRIVATE RYAN, it’s still intense and sets the tone for the rest of the movie.  Young Tommy’s early escapes from death are riveting and tense.  The film is rated PG-13 and as such you won’t see much bloodshed, but that’s not necessarily a bad thing.  R-rated movies these days use CGI blood which often looks fake. There’s nothing fake looking about DUNKIRK.  It all looks very real.

Christopher Nolan purposely chose unknown actors to portray the soldiers on the beach, and there is a minimal of dialogue.  We learn nothing about Tommy’s background, and he and his fellow soldiers do little more than looked dazed, exhausted, and frightened, which is exactly how they are supposed to look.  In most other movies, this lack of character development and lack of dialogue would be troubling, but not so here.  Here in DUNKIRK it comes off as authentic and real.

As such, Fionn Whitehead is effective and believable as Tommy, a character we know little about but we still want him to survive.  All we need to know is he’s on that beach and needs to get home.  In this situation, that’s enough to make his character work.

Aneurin Barnard is equally as good as Gibson, a French soldier Tommy befriends as they try to escape.  Since Gibson is French and speaks no English, he speaks in the movie even less than Tommy.  One Direction band member Harry Styles plays Alex, a soldier Tommy and Gibson rescue.  Styles gives Alex more personality than any other soldier in the film, and he makes Alex a cynical young man who gives away Gibson’s secret, that he is a French soldier impersonating a British one in order to be rescued by the British.

The folks on the boat probably deliver the best performances in the movie.  Mark Rylance is excellent as Mr. Dawson, the man who we learn later lost a son to the war and seems to embrace this mission as a way to save all his other “sons.”  Tom Glynn-Carney as Dawson’s son Peter and Barry Keoghan as Peter’s friend George also have some fine moments.

And Cillian Murphy is very good as the first soldier rescued by Dawson.  Shell-shocked, he resists their attempt to go to Dunkirk to rescue more soldiers.  He does not want to go back, as he is convinced they will die.

Once again, Tom Hardy is playing a role with a minimum of dialogue and with his face covered.  I’m starting to get used to Hardy playing roles where we can’t see his face, from Bane in THE DARK KNIGHT RISES (2012) to Mad Max in MAD MAX: FURY ROAD (2015). As pilot Farrier he only has a handful of lines here.  But that doesn’t stop Hardy from delivering a memorable performance.

And while he’s not in the movie a whole lot, Kenneth Branagh also makes his mark as the well-respected Commander Bolton.

In another buck of traditional storytelling, there isn’t a major woman character to be found, but again, it doesn’t hurt this powerhouse movie.

There are a lot of riveting sequences. Tommy’s initial escape from German soldiers gets the film off to a tense start. The sequence where Tommy, Gibson and Alex hide out in an abandoned ship stranded on the beach during low tide just before it is used as target practice by the German soldiers is as suspenseful as it gets.

Scenes of ships being bombed and sunk are harrowing and cinematic.  And the editing during the climactic sequence is second to none.  It’s one of the more suspenseful last acts to a movie I’ve seen in a while.

Nolan also makes full use of sound.  When the planes attack, the sound effects are loud and harsh.  They make you want to cover your ears.  In short, during the battle scenes in DUNKIRK, the audience truly feels as if they are part of the battle.  You’ll want to duck for cover.

Sure, I could have used a bit more dialogue and character development.  Perhaps that would have made this movie perfect for me.  But as it stands, it’s still a pretty remarkable film.

DUNKIRK is a harrowing adventure, a rousing look at a pivotal moment in history, a rescue that had it not happened, would have changed the future of western civilization because the Nazis most likely would have conquered England and France, and who knows what would have happened after that.

But that’s not what happened, thanks to the herculean efforts of hundreds of civilians and their small ships, who against all odds rescued 338,000 trapped British soldiers from the beaches of Dunkirk.

DUNKIRK tells this improbable story in mind-bending fashion, thanks to the innovative efforts of Christopher Nolan, one of the most talented writer/directors working today.

It’s history brought to life by a gifted filmmaker and storyteller.