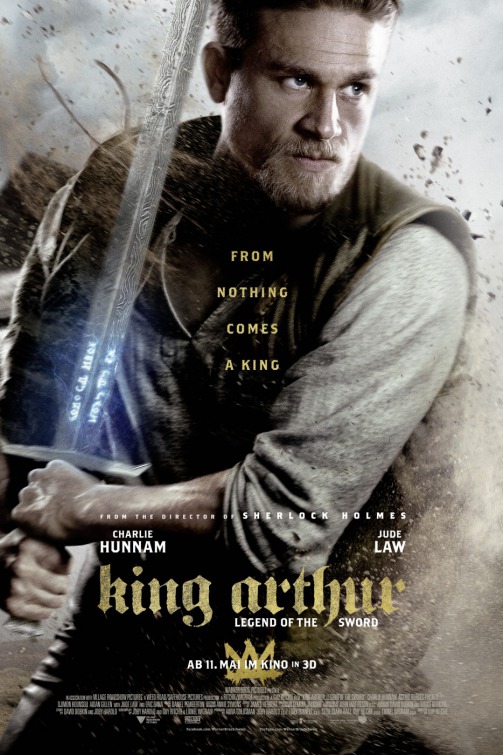 KING ARTHUR:  LEGEND OF THE SWORD (2017) is director Guy Ritchie’s attempt to do for King Arthur what he did for Sherlock Holmes, namely reinvent the character as an action movie hero.

KING ARTHUR:  LEGEND OF THE SWORD opens with an exciting pre-credit battle sequence featuring giant mastodons and ear-splitting explosions as we witness young Arthur’s father King Uther (Eric Bana) defend his kingdom from attack, only to see it fall when he is betrayed by his brother Vortigern (Jude Law).  Young Arthur is whisked away to safety, and in an energetic montage, we watch as the boy is raised in a brothel, receives martial arts training, and earns his street-smarts as he becomes a man.

The adult Arthur (Charlie Hunnam) is the good guy on the block, hanging out with his friends and protecting local innocents from the occasional bullies.  Doesn’t sound much like the Arthur of legend, does it?  That’s because it’s not.  Eventually, Arthur makes his way to the infamous sword in stone, and when he alone can remove it, everyone and his grandmother, including Vortigern, knows who he is.

Arthur seeks vengeance against Vortigern for the death of his parents, while Vortigern sees Arthur as a threat to his kingdom and seeks to annihilate him.   The battle lines are drawn.  May the best man win.  Of course, there’s little doubt here as to who will emerge the victor.

One of the reasons that Guy Ritchie’s SHERLOCK HOLMES movies were so successful was that he had Robert Downey Jr. in the lead role as Sherlock Holmes.  Here, as Arthur, he has Charlie Hunnam.  Now, I’m a big fan of Hunnam from his SONS OF ANARCHY (2008-2014) days, but he plays Arthur as if he’s still playing motorcycle gang member Jax Teller from SONS.  The script doesn’t help his cause as it includes lots of modern-day language and dialogue.  In fact, at times this movie seemed like SONS OF THE ROUND TABLE, and when Arthur was with his buddies, I half expected Hunnam to turn and say “Hey, Ope.  Where’s Clay?”

So, the fact that the Arthur character doesn’t really take hold here isn’t just Hunnam’s fault.  The writers don’t help him.  I like Hunnam, and he gives an energetic performance, but it just never really won me over.  I felt like I was watching a movie about Jax Teller sent back in a time machine to England in the days of King Arthur.

There were parts of KING ARTHUR:  LEGEND OF THE SWORD that I liked, and there were just as many things about it that I didn’t like.

Usually, in a movie like this, it’s the action scenes that I like the least, as generally they are long, lifeless, and dull, but that wasn’t the case here.  I really liked the action sequences in this one, and the credit for that belongs to director Guy Ritchie. The opening battle sequence with the monstrous mastodons hooked me in immediately and made me take notice that perhaps this film was going to be better than expected.

Later battle scenes are just as lively.  Ritchie’s camera gets right in on the action, and there’s lot of innovative camerawork during these scenes.  The fight sequences here are much more energetic than what I usually see in movies like this.

I really enjoyed both of Ritchie’s SHERLOCK HOLMES movies, as well as his previous movie, THE MAN FROM U.N.C.L.E. (2015) which was panned by critics.  I liked all three of these movies better than KING ARTHUR, mostly because those films had better scripts.  Ritchie’s work as a director is just as good here as those films, if not better.  Visually and in terms of this being a rousing action movie, the film works.

It also features some pretty cool creatures.  I’ve already mentioned the impressive looking mastodons, but there’s also this creepy sexually charged octopus creature which is a mixture of slimy octopus tentacles and naked women that make it one of the more intriguing beasts I’ve seen in a movie since the days of Ray Harryhausen.  There’s also a giant snake, which of the three, is probably the least impressive but still makes for a very cinematic monster sequence.  There were a couple of times where I thought I was watching a Sinbad movie instead of a King Arthur movie.

The film also has a loud, in-your-face music score by Daniel Pemberton that I liked a lot.  It reminded me of the way James Bernard used to score Hammer Films.  You definitely notice the music. Pemberton also scored Ritchie’s THE MAN FROM U.N.C.L.E, another soundtrack that I really liked.

The screenplay, however, is another matter.  Written by director Ritchie, Joby Harold, and Lionel Wigram, it tries very hard to re-invent both the character and the legend, giving both modern-day dialogue and motivations. Arthur seems more interested in protecting his friends than inheriting a kingdom.

The snappy dialogue didn’t really work for me here, as it just seemed out-of-place. When Robert Downey Jr. spoke with updated dialogue as Sherlock Holmes, he still sounded like Holmes.  Charlie Hunnam doesn’t sound like Arthur at all.  Neither does anyone else in the cast sound like they belong in the age of Camelot.

Jude Law plays the villainous Vortigern as a cold-hearted mean-spirited devil and delivers a performance that works up to a point.  He is too one-dimensional to be all that memorable a villain.  Still, he’s a better villain than we get in all those Marvel superhero movies, and a film like GUARDIANS OF THE GALAXY, VOL. 2 (2017) would have benefitted from a character like Vortigern, who at least has an agenda.

Astrid Beges-Frisbey plays one of the more intriguing characters in the film, The Mage, a woman who can communicate with animals.  I enjoyed her performance a lot and wish she had been in the film even more.

Djimon Hounsou does a nice job as Bedivere, the man who helps Arthur get his kingdom back, but it’s a rather small role and never takes full advantage of Hounsou’s talents.  Eric Bana briefly adds some class to the proceedings in the opening sequence as the ill-fated King Uther, Arthur’s father.

The rest of the cast all do a pretty good job in various small roles, mostly of Arthur’s friends.  Among these folks, I thought Neil Maskell stood out as a character named Back Lack.  He’s in one of the best scenes in the movie, where Vortigern  holds a knife to his throat to get information from Back Lack’s young son who has to watch his dad get mutilated.

The title, KING ARTHUR:  LEGEND OF THE SWORD, also did little for me.  It’s a mouthful, and it’s not particularly memorable.

The same can be said of the movie as a whole.  Strangely, I was most won over by the action scenes and the monsters in this one.  The story and the characters left me wanting more, so much so that I wish director Guy Ritchie was working with a different script entirely.

Still, I wasn’t expecting much, and it was better than I expected.

It reminded me of an old Ray Harryhausen SINBAD movie, re-imagined as a Netflix TV series, only not quite as good.