Welcome back to SHOCK SCENES, the column where we look at memorable scenes in horror movie history.

Up today is the big guy himself, King Kong.  With apologies to Godzilla, King Kong is the baddest monster on the planet.  Sure, Godzilla is known as the King of the Monsters, and he’s been in more movies than Kong, but Kong is King as well, and the one time they squared off in a movie, KING KONG VS. GODZILLA (1962), it was Kong who emerged victorious.

Today we’ll be focusing on King Kong’s entrance scenes, the scenes in his movies where he first makes his dramatic appearance.  We will concentrate mostly on the original KING KONG (1933) and its two remakes, but we will also look at the Japanese films and the awful KING KONG LIVES (1986).

KING KONG (1933) is the classic giant monster movie, one of the most exciting and well-made monster movies of all time.  It has aged remarkably well and still appeals to modern audiences.  The film is chock full of classic scenes, and Kong’s first entrance is no exception.

It starts when the Natives on Skull Island abduct Ann Darrow (Fay Wray) and bring her back to the island where they plan to offer her as a bride for Kong.  With Max Steiner’s memorable music blaring, the Natives lead Ann beyond the great wall where they tie her up so she can await the arrival of Kong.

With the beats of a gong, the Natives summon their king, and moments later, he arrives.  First we hear his roar— the special effects department used a lion’s roar played backwards and at a lower speed for this effect— and then as he knocks a tree over, Kong makes his appearance, and we see Willis O’Brien’s remarkable stop-motion animation effects as Kong breaks through the trees and descends upon Ann. 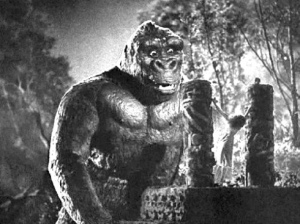 We then see a close-up of his monstrous face, which was in reality a huge model of his head built by O’Brien’s special effects team.

As first entrances go, it’s a classic.  It’s fun to imagine what it must have been like for movie audiences back in 1933 seeing Kong for the first time.  It must have been awesome and frightening.

The special effects here work so well.  To see Kong standing there, with Ann Darrow, with the great wall behind her and the Natives standing on top of the wall, and it all looking so real, is truly astonishing.

KING KONG VS. GODZILLA (1962) is a silly movie that is only notable for pitting these two legendary monsters together in one film.  Since Kong died at the end of the original KING KONG (1933) falling from the Empire State Building in probably the movie’s most enduring image, there really couldn’t be any sequels.  There was SON OF KONG (1933) which featured a younger cute and cuddly Kong Jr., but that was it.  There were plans for a Kong prequel of sorts, a story which would have taken place in the middle of the action in KING KONG, which would have been built around a storyline of the adventures of Carl Denham and the crew of the Venture on their way back to New York City with King Kong in tow on a raft, an adventure that would have seen Denham and company and Kong face off against a new threat, but that project never got off the ground.

Perhaps the worst looking Kong in KING KONG VS. GODZILLA.

So decades passed before Toho, the Japanese movie studio which brought Godzilla to the world, secured the rights for the Kong character and made KING KONG VS. GODZILLA.

Kong’s first entrance in KING KONG VS. GODZILLA isn’t memorable at all.  We hear his roar first, and then suddenly he’s there, showing up at the Natives’ village to fight off a giant octopus.  Toho always used the man-in-suit method to create their giant monsters, and their Kong suit in this movie has to be the worst looking King Kong of all time.

KING KONG ESCAPES (1967) is yet another silly Toho movie, supposedly made to tie-in with the 1960s animated TV series KING KONG.  It certainly plays like a Saturday morning cartoon, which is the complete opposite of the original KING KONG which was much more akin to the relentless ferocity of JAWS (1975).  That being said, I have to confess, I like both Toho King Kong movies.

Kong to the rescue in KING KONG ESCAPES.

Still, KING KONG ESCAPES has nothing to offer in terms of Kong’s first appearance.  On Kong’s island a dinosaur shows up and scares young Susan (Linda Miller).  When she screams, the camera cuts away to a close-up of Kong’s face.  His eyes are closed.  He opens them to reveal eyes that look like they belong on a Sesame Street Muppet.  We then see him sitting in a cave.  He quickly gets up and races to the scene to protect the young woman from the dinosaur.  What a gentleman!

KING KONG (1976) the incredibly hyped remake by producer Dino De Laurentiis was a box office bomb and panned by both fans and critics alike.  It’s a pretty bad movie, but in spite of this, surprisingly, it does enjoy a few fine moments.  Kong’s initial entrance is one of them.  In fact, it’s so good that I’d argue that of all Kong’s entrances, it might be the best!  It’s certainly the only part of this 1976 film that even comes close to equaling anything done in the 1933 original.

This time, it’s Jessica Lange who’s captured and tied up as the Natives summon Kong.  I actually love the way director John Guillermin conceived this sequence.  We see trees being knocked over from Kong’s point of view, and we first see Kong through close-ups of his face, and it’s the best most authentic looking face to date, thanks to the incredible make-up of Rick Baker.  We see Kong’s eyes as he marches through the trees towards Jessica Lange.  Close-up, Kong looks as menacing as he’s ever looked on film.  It’s a thrilling sequence, probably the most original and thrilling part of this 1976 flick. 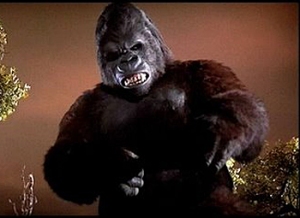 It’s also helped along by John Barry’s music score, which as a whole, I don’t like at all.  But in this scene, it’s probably Barry’s best moment.

At this moment in the movie, the film truly captures the awe of King Kong.  The build-up—audiences hadn’t seen a serious Kong since the 1933 original, the anticipation, is wonderfully captured in this sequence.  And when the camera pulls back, and we see Kong’s entire body for the first time, Rick Baker in his ape suit, he’s awesome to behold, and when he roars, the film nails King Kong at this moment perhaps more effectively than any other moment in any other King Kong movie.

And then— it’s all downhill from there.

It’s amazing how quickly and how far this movie falls after this scene, which is the story for another article.   A lot of it is the silly script, but most of it is the special effects which to me has always been the main reason this 1976 film failed.  Rick Baker’s ape suit looks fine, and in terms of how he looks, he blows the Toho Kongs out of the water, but at the end of the day, it’s still a man-in-a-suit which has never ever been a completely satisfying way to make a giant monster.  The hype for the 1976 KING KONG was all about the giant mechanical robot of Kong that was built and was supposed to be the main special effect in this film, but a not-so-funny thing happened:  it never worked. It appears in two brief scenes in this film for a mere few seconds.

But Kong’s first entrance in this 1976 film— priceless.

KING KONG LIVES! (1986) is the horrible sequel to KING KONG (1976) that is believe it or not even worse than the 1976 film.  In this one, scientists bring Kong back to life after his fall from the World Trade Center so the first time we see Kong in this one he’s a patient in a laboratory.  Not very exciting.  Neither is this movie. 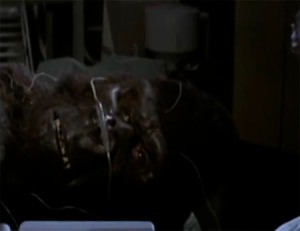 KING KONG (2005) is Peter Jackson’s homage to the 1933 original.  Jackson’s obviously a fan of the original Kong, and this was clearly a labor of love, but strangely, it’s a very uneven movie.  The scenes on Skull Island are exceptional and make this one worth watching for these scenes alone, but surrounding these scenes is a dull opening in New York City, and the climax which also takes place in New York also doesn’t really work.  Kong and Ann share a romantic moment in Central Park?  Seriously?

Now while I love the Skull Island scenes, I’m not so hot on Kong’s first entrance.  Why?  Because it’s oddly all very undramatic!  It’s Naomi Watts who’s abducted for Kong this time, and when Kong appears, he just sort of shows up, coming out of the jungle swinging his arms and roaring.  It’s nothing we haven’t seen before, and it plays much closer to the mundane first appearances in the Toho movies than the well-crafted and dramatic entrances in the 1933 and 1976 versions, making it yet another contribution to the reasons why the 2005 version is an uneven movie.

Kong looks impressive in the 2005 Peter Jackson KING KONG, but film is uneven.

KONG:  SKULL ISLAND (2017) was just released a week ago, and while many fans are instantly calling this the best Kong flm since the 1933 original, I was only lukewarm on it.  I found the script rather stupid, the characters dull and not developed to any degree of satisfaction, and Kong himself, while looking fine, rather boring.

Kong in this movie is probably the least satisfying Kong in any of the movies for the simple reason he has zero personality.  In the other movies, Kong showed a wide range of emotions, from anger to rage to ferocity to even tenderness, but here, he’s just a slow moving enormous creature who fights monsters and humans.  Blah.

There are actually two entrance scenes here for Kong.  The first is a teaser, in the opening moments of the film, which takes place during World War II.  Both an American and Japanese pilot crash land on Skull Island, and they quickly become involved in hand to hand combat, when suddenly King Kong appears.  We see his giant hand, and they see him.

Kong’s official first appearance comes later in the movie, which now takes place in 1973, as military helicopters carrying the scientific expedition to Skull Island suddenly encounter Kong who introduces himself to the copters by hurling trees at them.

This scene had the potential to be awesome, but the full effect of this first entrance is never as cinematic as it should have been.  Director Jordan Vogt-Roberts seemed satisfied to film this as a routine war scene as opposed to a larger-than-life Kong-makes-his-first-appearance scene.  Too bad.

You can’t really argue that any other Kong movie is actually better than the 1933 original KING KONG.  It simply hasn’t been surpassed yet.

However, I can and will argue that in terms of first appearances, if any other film challenges Kong’s first entrance, surprisingly, it’s the 1976 version of KING KONG that does this.  Director John Guillermin pulls out all stops and creates an impressive and thrilling first Kong scene, combined with John Barry’s effective music—the only moment in the film where his music works—, as well as Rick Baker’s amazing make-up, makes this moment as good as Kong’s opening moment in the 1933 film, and way better than similar scenes in any of the other Kong movies, which is saying something, since the rest of the 1976 film is so bad.

So there you have it.  A look at King Kong’s first entrances in the KING KONG movies.

Hope you enjoyed today’s SHOCK SCENES.  I’ll see you again next time when I look at more classic scenes from other classic horror movies.