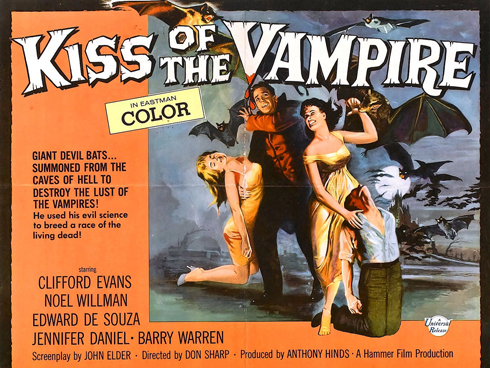 Since Christopher Lee was not interested in playing Dracula again after Hammer Films’ megahit HORROR OF DRACULA (1958), (it would take him a few more years to change his mind) Hammer made a sequel without him, THE BRIDES OF DRACULA (1960), in which Peter Cushing reprised his role as Doctor Van Helsing.

And after the success of THE BRIDES OF DRACULA, Hammer decided to follow it up with another vampire movie, KISS OF THE VAMPIRE (1963), this one without either Lee or Cushing, and without their A-List director, Terence Fisher.  It was directed by Don Sharp.

All this being said, while not as highly regarded as some of Hammer’s best vampire movies, KISS OF THE VAMPIRE is nonetheless a well-made, well-acted, and extremely atmospheric vampire movie.  If not for a poorly conceived and executed conclusion, it would have been even better.

KISS OF THE VAMPIRE opens with a chilling pre-credit sequence which is quintessential Hammer.  As the village priest leads a burial ceremony, complete with grieving townspeople, a man Professor Zimmer (Clifford Evans), arrives upon the scene.  Taking a shovel, he drives it into the loose soil of the girl’s grave, causing a fountain of bright red blood to gush from underneath the ground.  Cue James Bernard’s rousing music score.  It’s a perfect beginning to another atmospheric Hammer vampire film.

A young couple Gerald (Edward de Souza) and Marianne Harcourt (Jennifer Daniel) on their honeymoon arrive in a small European village, stranded there temporarily when their car runs out of petrol.  They are invited to the castle overlooking the village, and there they meet their host, Dr. Ravna (Noel Willman) who introduces the couple to his family, which consists of his son and daughter, and he promises to get them some petrol so they can continue their journey.

In the meantime, Dr. Ravna invites Gerald and Marianne to a party at the castle.  It seems like the perfect idea, until Gerald and Marianne realize that their hosts— and in fact all the guests— are vampires!  We’ll take that petrol now, thank you very much!

When Marianne is abducted by this undead family, Gerald turns to the knowledgable Professor Zimmer for help in saving Marianne and destroying the vampires.

KISS OF THE VAMPIRE has a lot of things going for it.  First off, it looks fabulous.  In terms of atmosphere and capturing that whole vampire feel, it’s up there with THE BRIDES OF DRACULA (1960).  Director Don Sharp deserves a lot of credit for the way this one looks.

And while its story is nothing new— young couple runs afoul of a vampire in a remote European village— there are parts of it that are refreshing.  For instance, instead of one vampire, we have a family of vampires, and eventually an entire congregation of vampires.

The Ravna family is charming, hospitable, and friendly.  They don’t seem like vampires at all.  It’s easy to see how Gerald and Marianne let their guard down so easily.  And unlike the traditional black and red garb that Dracula wears, Ravna and his vampires wear white robes.

Producer Anthony Hinds wrote the screenplay under his pen name “John Elder.”  Hinds wrote a lot of Hammer Films, including some of their best, films like THE CURSE OF THE WEREWOLF (1961), THE EVIL OF FRANKENSTEIN (1964), and DRACULA HAS RISEN FROM THE GRAVE (1968), to name just a few.  It’s an intriguing screenplay.

There are things, however, that don’t work all that well.

For starters, Noel Willman is no Christopher Lee.  His vampire Dr. Ravna is a little too non-vampiric. He comes off as polite and gentlemanly, with just a touch of vulgarity.  He’s hardly sensual, and the scenes where he commands his vampire women to do his bidding are difficult to believe.  The best part of his performance is it’s easy to believe when village officials refute accusations that he’s a vampire since he’s the area’s most upstanding citizen.  Willman pulls off this side of Ravna’s personality with ease.  The problem is he doesn’t do much with the other side, the darker side.  He’s not much of a vampire.

Barry Warren and Jacquie Wallis are both rather wooden as Ravna’s adult vampire children, Carl and Sabena.  The best vampire performance in the movie belongs to Isobel Black as Tania, one of the village girls held captive by the Ravnas, who is turned into a vampire.  Black’s Tania is sensuous, mesmerizing, and eager to drink blood.

Edward de Souza makes for an amiable hero as Gerald Harcourt, although he does tend to overract a bit at times, something he didn’t do in his earlier Hammer Film appearance, in THE PHANTOM OF THE OPERA (1962).

And as the main hero, the eccentric Professor Zimmer, Clifford Evans does an adequate job, although just as Noel Willman is no Christopher Lee, Evans is no Peter Cushing either, and Zimmer is no Van Helsing.  KISS OF THE VAMPIRE definitely misses a strong presence like Cushing or Lee.  But Evans is a very good actor, and in the scenes where Zimmer is not drunk, Evans makes him an effective vampire hunter.

While director Don Sharp makes KISS OF THE VAMPIRE a very atmospheric vampire movie, he doesn’t handle the horror scenes as well.  The scene where Harcourt and Professor Zimmer rescue Marianne from Ravna’s clutches lacks punch, and there really aren’t any memorable shock scenes in this one, other than the pre-credit sequence.

Then there’s the ending.

The conclusion where Professor Zimmer uses a black mass ritual to destroy the vampires was originally conceived for THE BRIDES OF DRACULA (1960).  The vampire in that movie, Baron Meinster, was supposed to have been torn apart by a horde of vampire bats, unleashed by a ritual performed by Dr. Van Helsing, but Peter Cushing balked at this idea, claiming that Van Helsing wouldn’t resort to the dark arts to defeat a vampire, a decision I believe he was spot-on with.

So writer Hinds went with that idea for his ending to KISS OF THE VAMPIRE.  While it’s an intriguing idea, mostly because having bats attack and destroy your vampires is pretty unique when it comes to vampire movie endings, I’m still not sure I understand it. Professor Zimmer says his ritual will in effect turn the forces of darkness on each other, but I’ve never understood why this happens.  What is it that Zimmer does that makes the vampire bats attack the vampires?  Are they confused?  Vengeful that the vampires allowed Zimmer to perform this ritual?  It’s never clearly explained in the movie.

The sequence is ultimately done in by inferior special effects.  The incoming swarm of vampire bats descending upon the Ravna castle is filmed with cheap animation, looking like the bats in SCOOBY DOO cartoons.

The bats inside the castle look just as fake and don’t look any better than the bats used in the old Universal Dracula movies.  In fact, in color, they actually look a bit worse.

As such, KISS OF THE VAMPIRE has never been one of my favorite Hammer movies.  It’s not bad, but it lacks the sensuality and horror usually associated with the best of the Hammer vampire flicks.

Then again, if the vampiric Tania were to show up at your bedroom window in the dead of night, I doubt you’d be able to turn her away.  In fact, I’d wager to guess you’d be powerless to prevent her from giving you the KISS OF THE VAMPIRE.