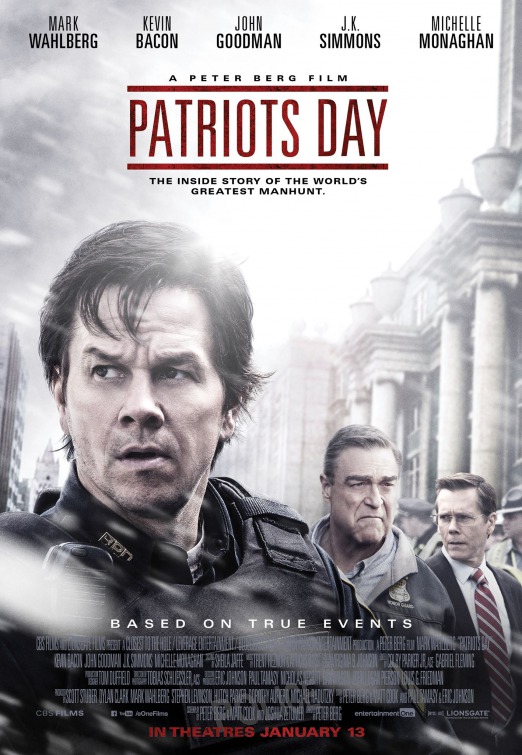 PATRIOTS DAY tells the riveting true tale of the Boston Marathon bombing, which occurred on April 13, 2013, and it tells it efficiently and without any fanfare.

As such, it works better as a docudrama than a suspense thriller.

PATRIOTS DAY follows fictional character Tommy Saunders (Mark Wahlberg), a Boston homicide detective, who finds himself demoted for a day, Patriots Day, where he’s forced to work as a beat cop in uniform covering the finish line at the Boston Marathon.

The rest of the characters are pretty much based on real people.

And then there are the victims.  Young couple Patrick Downes (Christopher O’Shea) and Jessica Kensky (Rachel Brosnahan), who both lost limbs during the explosion, as well as others, who are all given some background stories before the bombing, and we follow their plight afterwards.

There’s also Dun Meng (Jimmy O. Yang) the young Chinese man whose car is hijacked by the bombers, and whose daring escape from the Tsarnaev’ brothers is one of the more exciting scenes in the movie.

Which brings us of course to the bombers themselves, Tamerlan Tsarnaev (Themo Melikidze) and his nineteen year-old brother Dzhokhar (Alex Wolff).  While we learn that they are Muslims and have a radical agenda, not much light other than this is shed on their characters.  Nonetheless, both Melikidze and Wolff deliver chilling portrayals of these two terrorists.

Even Red Sox player David Ortiz shows up at the end for his famous address to the Fenway faithful after the ordeal had ended.

After the bombing, the story follows the ensuing investigation and manhunt, and Wahlberg’s Tommy Saunders is there every step of the way, which actually works against the story.  While Wahlbeg is fine as Saunders, it’s really not all that believable that one officer would be there at the finish line for the bombing, and then there again on that fateful night in Watertown for the climactic shoot-out, as well as on hand the following day for the arrest of Dzhokhar Tsarnaev.

PATRIOTS DAY has its moments, mostly because the real story is so horrific and the ensuing manhunt so captivating.  If it were not based on a true story, and the film was to be judged on its artistic merits alone, PATRIOTS DAY would be a far less successful film. And while it does a solid job telling this story, there were times when I wanted more from this movie.

In short, I didn’t learn anything from this film that I didn’t already know from following the story in the news when it happened back in April 2013.

The cast and performances are fine, led by Wahlberg who could play a Boston cop in his sleep.  John Goodman, Kevin Bacon, and J.K. Simmons lend solid star power in their supporting roles, although they aren’t on-screen enough to make too much of an impact.  Of the three, Simmons probably fares the best.

The same can be said for the victims, with the exception of Jake Picking as M.I.T. Officer Sean Collier.  In his brief screen time, Picking really brings Collier to life, setting the stage for one of the saddest scenes in the film, as the officer’s life is cut short by the bombers’ bullets.

And both Themo Melikidze and Alex Wolff are chlling as the Tsarnaev brothers.  Melikidze portrays older brother Tamerlan as cold and calculating, completely committed to his jihad agenda, while Wolff plays younger brother Dzhokhar as the follower, doing whatever his older brother asks, when, that is, he’s not texting on his phone or behaving like a nineteen year old.

Their performances are adequate but didn’t wow me.  Perhaps the best thing that can be said of them is that director Peter Berg truly captures what they looked like.  Their resemblance to the real brothers is uncanny.

Not to get political, but in the scene where Tamerlan Tsarnaev spouts off his agenda to his Chinese hostage Dun Meng, talking about how the 9/11 attacks were faked, and that Americans don’t really know the truth about what’s going on in the world, as we are continually duped by a manipulative government and a crooked media that feeds us false news, I couldn’t help but think how his insane banter sounded eerily similar to one Donald J. Trump.

And speaking of Dun Meng, Jimmy O. Yang’s performance is a good one and rather memorable.

PATRIOTS DAY was directed by Peter Berg, whose previous movie DEEPWATER HORIZON (2016) also starred Mark Wahlberg.  That one told the story of the oil rig fire in April 2010 which caused the worst oil spill in U.S. history.  That film was just OK, and I found it all rather superficial.

Berg runs into similar problems here with PATRIOTS DAY, although not as much, and that’s because even though once again the characters are not really that well-developed, it’s less of an issue here because the strength of the film is its story.  And Berg gets the story right.  He does a nice job chronicling events from just before the bombing until the final arrest.

That being said, the film is not as powerful as I expected it to be.  The actual bombing scene isn’t quite as horrific or emotional as I thought it would be, either.

Also, I really expected more regarding the behind the scenes manhunt.  After all, the authorities actually shut down the city of Boston for a night as they searched for Dzhokhar Tsarnaev, but other than a brief conversation where we see the authorities make this decision, the film has little else to say about it.

One of the best scenes in the movie doesn’t even involve any of the main characters.  It’s the interrogation of Tamerlan’s wife by some mysterious government authorities.  It’s probably the most fascinating scene in the film.

Director Berg, Matt Cook, and Joshua Zetumer wrote the screenplay which does a concrete yet uninspiring job of telling this story.  The facts are all there, even when sometimes the emotions aren’t.

I enjoyed PATRIOTS DAY, but I didn’t leave the theater shaken or upset.. For me, that happened the first time around, watching the events unfold in real-time on television back in April 2013.

That was real.  This is just a movie, and it shows.