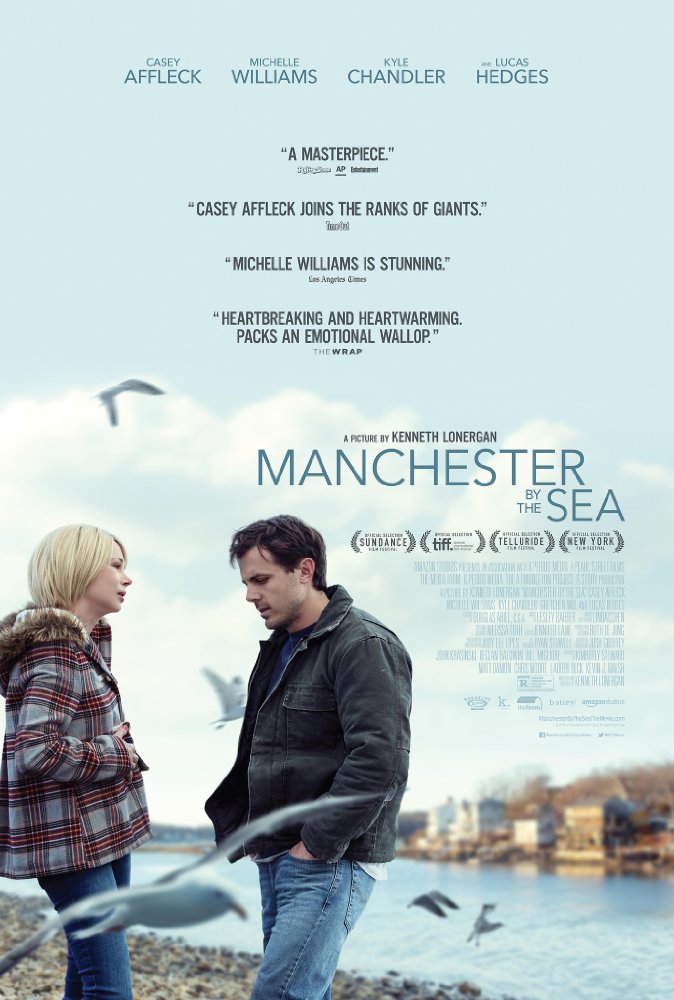 MANCHESTER BY THE SEA (2016) is steeped in so much New England flavor, it’s like having fish and chips and beer, the scent of fried batter and hops so vivid your mouth will water.

However, this meal is not a celebration, but a funeral, the story of a man Lee Chandler (Casey Affleck) thrust into a life-changing situation, piled on top of a traumatic event that had already crushed the life out of him.  Lee is a walking coma.  His body goes through the motions of life, but his mind, heart, and soul are dead.

When we first meet Lee, he’s working as a janitor at a low-income apartment complex in Boston. He also lives there, in a tiny one room apartment.  His life is lonely and sad. One day he receives a phone call and learns that his older brother Joe (Kyle Chandler) has died, his heart having given out, several years after having been diagnosed with congestive heart disease.

Lee travels north to the ocean side Massachusetts town of Manchester to make arrangements for his brother’s funeral and to temporarily watch his brother’s 16 year-old son Patrick (Lucas Hedges).  However, Lee learns that in his will, his brother Joe left Lee custody of his son Patrick, and of course Lee realizes this is something he cannot handle.

But the sad reality is there is no one else.  Joe’s wife, Patrick’s mother, is estranged from the family and no one really knows where she is.  Plus she’s an alcoholic and suffers from psychological problems.  Joe and Lee’s parents have both passed away.  There is an aunt and uncle who, according to Lee, were originally slated to care for Patrick, but they have since moved across the country and really aren’t viable options for Patrick.  And Lee is on his own, as he has long been divorced from his wife Randi (Michelle Williams).

Lee knows that he is not up to the task of being responsible for a 16 year-old boy, but he also doesn’t want to let his brother or his nephew down, so he temporarily agrees, while trying to figure out a long-term plan to make sure his nephew is taken care of.  Not an easy task for a man whose own life is in shambles, nor is it any easier for 16 year-old Patrick, whose life is entrenched in his home town with school, hockey, girlfriends, and playing in a band.  Plus Lee and Patrick get along as well as oil and water.

I really, really liked MANCHESTER BY THE SEA.  Much has been made about the performance by Casey Affleck, and we’ll get to him in a moment, but first, in spite of the excellent acting performances in the film, my favorite part of MANCHESTER BY THE SEA is the screenplay by director Kenneth Lonergan.  I really enjoyed how it tells its story.

The action does not unfold chronologically, but jumps around in time.  So, we are often watching scenes with characters that we know are dead, and yet this works amazingly well here because often these scenes occur when they should naturally.  Lee thinks about how his brother first got sick, and suddenly we’re there in the hospital room at the exact moment when Joe was first diagnosed, and we watch the entire scene play out.

I really enjoy this kind of storytelling.  It makes for an optimal storytelling experience.

The acting is as good as advertised, perhaps even better.  I really liked Casey Affleck here as Lee Chandler.  The best thing I can say about his performance, and this holds true for the entire movie, for the other acting performances and for the writing and direction, is that it all comes off as true.  I believed everything that happened in this movie.

In Affleck’s case, for example, he has survived a traumatic life event which has shaped his current personality.  He is pretty much devoid of happiness, as he has shut himself out of life because he cannot bear the pain.  Even if he wanted to, he cannot break out of this pattern.  It’s as if a part of him died with the event and there’s simply no way he can get it back.  There’s a line near the end of the movie, which pretty much sums up his situation, when Lee admits, “I can’t beat this.”

I’ve enjoyed Affleck in other movies, but his performance here in MANCHESTER BY THE SEA is my favorite so far.

Michelle Williams is also excellent as Lee’s ex-wife Randi.  She’s not in the movie as much as Affleck, but she’s spot-on in all of her scenes, and she’s in some of the most potent scenes in the movie.  The one near the end, where she finally opens up to Lee about the things she said to him after their marriage ended, is one of the most powerful moments in the film.

Kyle Chandler is very good as Lee’s older brother Joe, so much so that he makes you forget that his character is dead before we ever see him on-screen.  Joe’s scenes are particularly potent for that reason, because we know his fate.  They are also moving because when we witness the horrifying event which scars Lee’s life, it’s Joe and his young son Patrick who are there to help Lee pick up the pieces.  But of course, Joe isn’t around much longer. These scenes also show the deep committment Lee feels towards Joe and Patrick, because they were there for him when he needed them.

C.J. Wilson also delivers a strong performance as family friend George, the one person who Lee can turn to for help.  George worked with Joe and knows the whole family, and he’s constantly there offering to help Lee.  It’s a performance that makes us all long for a friend like George.

And Lucas Hedges is also very good as Patrick.  The best part of Hedges’ performance is he is not some sweet innocent boy who we feel so bad for.  He’s a real pain in the ass, a typical 16 year-old boy, dealing with school, sports, friends, and juggling more than one girlfriend at a time.

I absolutely loved the dynamic between Lee and Patrick.  Patrick’s life, from the way he is constantly on his phone, to having more than one girlfriend, to sleeping with them in his bedroom in father’s house, is completely foreign to Lee.  They do not get along, and yet, there is nothing cliché about this relationship.  We don’t see Lee explode at his nephew and engage in out-of-character lectures and speeches.  He deals with his nephew on his own terms, like when Patrick asks if it’s okay if one of his girlfriends spends the night, and  Lee tells him no, simply saying, “I don’t like her.”

Yet, Lee is always there for his nephew, even silently and without complaint driving him everywhere he needs to go.  The dynamic between Lee and Patrick drives this movie, and like the rest of the film, it comes off as honest and true.

But this is really Lee’s story.  We see in a gut-wrenching  flashback the horrifying event which scarred his life and ended his marriage, we watch him witness his brother’s illness, we see him struggle to take care of his teenage nephew after his brother’s death, a job that returns him to his home town, resurrecting haunting memories, and putting him back into close proximity with his ex-wife Randi.

Director Kenneth Lonergan has made a brooding, emotionally-charged drama that held my interest throughout.  I wanted to know what Lee was ultimately going to do about Patrick just as much as I wanted to learn what caused Lee to become such an unhappy man.

MANCHESTER BY THE SEA is a powerfully moving drama about a family where things have continually gone wrong, which is true for a lot of families, and it’s a story about one man in particular who in spite of the enormous hurdles thrown his way, has to keep it together long enough to help his sixteen year-old nephew stabilize a life of his own.