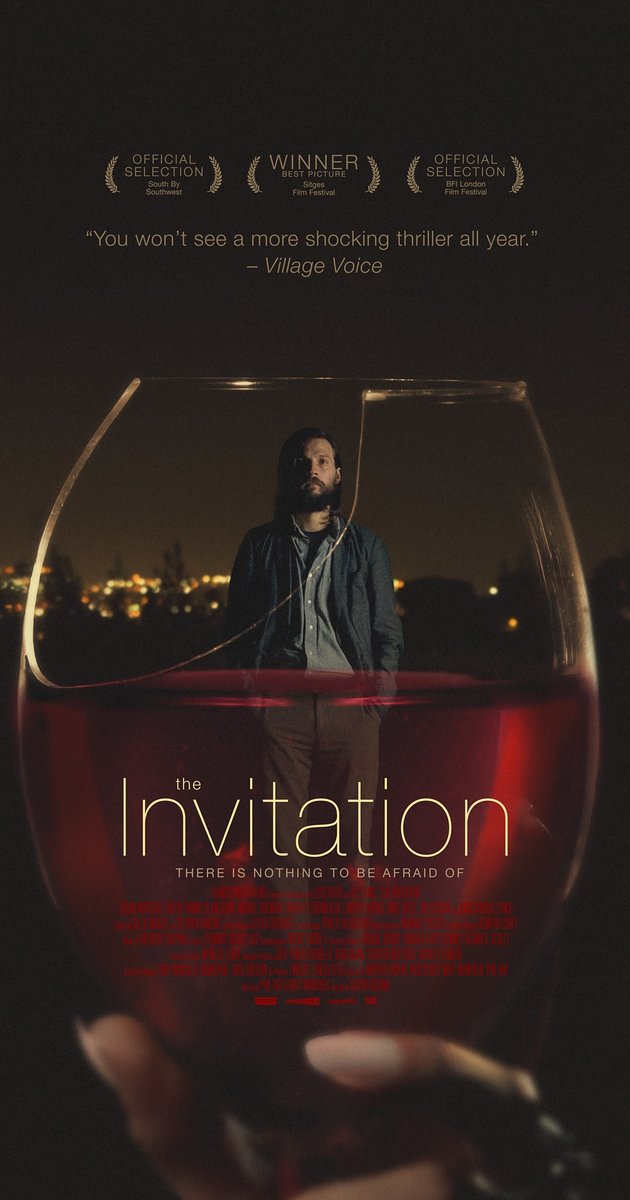 If something doesn’t feel right, it probably isn’t.  Then again, maybe your emotional baggage is just making you paranoid.

That’s the overwhelming feeling generated in the taut thriller THE INVITATION (2015) in which main character Will (Logan Marshall-Green) has the haunting feeling that the dinner party hosted by his ex-wife and her new husband is all so very wrong and dangerous; yet, he can’t deny that his head is clouded by grief over the death of his young son, a death he and his ex-wife still have not come to terms with.

THE INVITATION opens with Will and his current girlfriend Kira (Emayatzy Corinealdi) driving to Will’s ex-wife’s dinner party, when their car strikes a deer.  The animal is badly injured, and without hestitation, Will puts it out of its misery using a tire iron, which says something about his resolve and temperament right at the outset.

Will feels uncomfortable immediately upon arriving at his former home, even though he’s surrounded by a large group of his friends who are already there at the party.  Seeing his ex-wife Eden (Tammy Blanchard) only opens old wounds for him, and it doesn’t help that her new husband David (Michiel Huisman) is overly sympathetic and syrupy sweet, but there’s something off-putting about him that continually rubs Will the wrong way, so much so that he becomes suspicious of every little thing the man does, like seemingly locking them inside the house, an action that David dismisses as the innocent act of locking one’s door.

Will also takes issue with David’s decision to invite a couple of his friends to the dinner party.  Will was under the impression that the gathering was supposed to be a closed reunion of old friends.  And when Will perceives what he considers to be weird things happening, he tries to warn everyone, but they dismiss his charges as the emotional misgivings of a grieving parent and urge him to relax and see things through.  The more the evidence seems to support his friends’ assertions that there really isn’t anything wrong inside the house, the more Will questions his own feelings.

After all, his friends are right.  He’s still grieving over his son’s death.  There’s nothing really sinister going on inside Eden’s and David’s house, is there?

And that’s the fun of THE INVITATION.  It plays its shell game well.  The movie does a terrific job masking the truth.  The audience feels the same way Will does. There’s just something very peculiar about David and Eden and their new friends.  And yet, all the peculiarities can be explained away, but still, Will can’t shake that troubling feeling that they are all in danger.  To make matters more frustrating, Will is completely on his own. None of his friends or his girlfriend Kira feel the same way he does or see the same things he does.  It’s all very maddening, yet it’s a heck of a lot of fun as it makes for a very suspenseful story.

The screenplay by Phil Hay and Matt Manfredi is sharp and incisive, and it plays like an intricate puzzle.  We empathize with Will, but we really don’t want him to be right, even though we tend to believe him because he doesn’t come off as overly disturbed.  Sure, he’s emotional, he’s grieving, but he seems to be a pretty solid well rounded guy, except that he’s now wounded by his son’s death. The movie does a really good job keeping its audience off balance.

It’s a strong screenplay by Hay and Manfredi, much better than their work together on the subpar remake CLASH OF THE TITANS (2010).  They also co-wrote the box office bomb R.I.P.D (2013) starring Ryan Reynolds and Jeff Bridges.

Director Karyn Kusama has made a very tight and scary little thriller.  It kept me guessing throughout, and the payoff was frightening and satisfying.  The film also doesn’t skimp on the violence.  There are some jarring scenes in this one.

Logan Marshall-Green is very effective as Will, and his performance drew me in immediately.  I felt for him and believed that he was seeing things that were weird enough to be concerned about, even if no one else in the movie believed him.

Tammy Blanchard is sufficiently weird as Eden, as is Michiel Huisman as her new husband David.  There’s something so very off-putting about the two of them, and yet David always says the right things to put people at ease and disarm their fears.

The film has excellent acting all around.

I had heard good things about THE INVITATION, but really didn’t know what to expect.  It lived up to my expectations and then some.

If you like tense thrillers in the tradition of Alfred Hitchcock you’ll love THE INVITATION.  It’s as engrossing as it is deadly.

It’s one invite you’ll be glad you didn’t pass up.

One thought on “THE INVITATION (2015) Keeps Its Audience Off Balance”