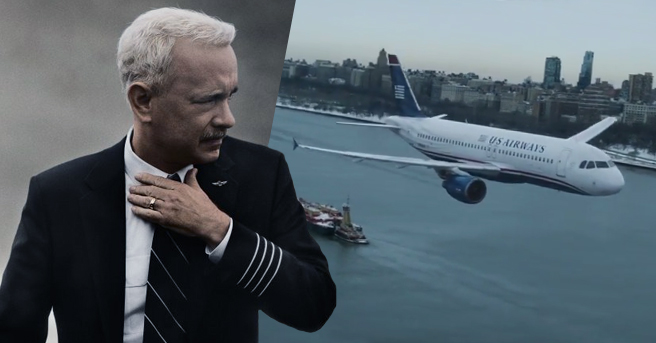 SULLY (2016) has a remarkable story to tell, so even if it were just a mediocre movie, it would still be worth seeing due to the strength of its story.  The good news is SULLY is more than just a mediocre movie:  it’s an impeccably made film by director Clint Eastwood, and it features yet another superb performance by Tom Hanks, which means that simply put, SULLY is  an exceptional movie, one that you should definitely see at the theater.

SULLY tells the incredible true story of the “Miracle on the Hudson,” which occurred on January 15, 2009 when airline Captain Chesley Sullenberger guided his disabled plane onto the frigid waters of the Hudson River, a forced landing in which all 155 people on board, passengers and crew, survived.

Sully (Tom Hanks) becomes an instant hero.  Yet, the airline and its insurance company are none too happy that one of their planes ended up in the Hudson River.  In fact, their computer simulations show that the plane could have made it to two airports.  They believe Sully erred in his decision to land the plane on the water.  Of course, Sully disagrees, saying it’s his belief that there was no way they would have made it to an airport.  He did the only thing he could do.

Suddenly Sully and co-pilot Jeff Skiles (Aaron Eckhart) are the subjects of a massive investigation into the forced landing, putting their reputations on the line, and in Sully’s case, making him second guess himself, fearing that perhaps he made a mistake and put the lives of the 155 people on board in jeopardy.

There are many fine things about SULLY.

To begin with, it has an excellent script by Todd Komarnicki, based on the book  “Highest Duty” by Chesley Sullenberger and Jeffrey Zaslow.  It makes the wise choice of not telling its tale in chronological order.  Had it done so, the movie would have featured the exciting forced landing first, leaving the anti-climactic and dialogue-driven investigation to follow.  When SULLY opens, the forced landing has already happened, and the movie dives right into the investigation.  The landing is shown via flashbacks.

The dialogue is first-rate, and there are plenty of memorable lines, like when an official congratulates Sully and tells him that New York hasn’t had much good news lately, especially with stories involving airplanes.

What can you say about director Clint Eastwood at this point?  Eastwood is 86 years old, and the fact that at his age he’s still directing and sometimes acting in movies is incredible.  And he’s not only making movies, but he’s making quality movies!  Before SULLY, he directed AMERICAN SNIPER (2014), one of the best movies of that year.  SULLY is one of the best movies of this year.

For years, starting in the 1960s, Eastwood was the best action star on the planet.  In 1992, he won an Oscar for Best Director for UNFORGIVEN (1992), a film that also won Best Picture that year, in what many at the time considered to be Eastwood’s swan song.  Eastwood was 62.  Since then, Eastwood has gone on to direct one quality movie after another.  Sure, he’s had some misfires along the way— HEREAFTER  (2010), for example— but for the most part his films have been phenomenal.  His last two movies AMERICAN SNIPER and JERSEY BOYS (2014) were both among my favorite films of 2014.  And I can’t stress this enough:  Eastwood is 86 years old.  It’s quite possible that when his career is over, he might be remembered more for being one of Hollywood’s greatest directors than one of its greatest action stars.

Eastwood does a phenomenal job here with SULLY.  The high energy behind this movie is not what you expect from a director pushing 90.  AMERICAN SNIPER may be the more impressive of the two films, because it had a more complicated story to tell, whereas SULLY just on the strength of its story alone promises to be a crowd pleaser.

But Eastwood uses his talents behind the camera to make this movie even better.  The investigation scenes have Eastwood’s stamp all over them.  Indeed, you can trace the theme here all the way back to Eastwood’s iconic actioner DIRTY HARRY (1971), which of course he only starred in, but Eastwood embraced Harry Callahan’s law-in-your-own-hands anti-burearacy philosophy as his own, and it would show up in future Dirty Harry films and other Eastwood projects.

You can see it here in SULLY.  Aaron Eckhart’s Jeff Skiles tells his best friend Sully that the airline should be praising Sully— everyone survived!— not investigating him.  But that’s not enough for the airline.  Their plane ended up in the river, and in their eyes, that’s something that should not have happened.  Sure, no one died, but everyone’s life was put in jeopardy.  In Eastwood’s vision, this way of thinking is insanely ridiculous.

Eastwood also makes wise creative choices.  The forced landing is shown twice.  The first time we see it from different perspectives, including from the air traffic controllers who are desperately trying to convince Sully to head to an airport.  But the second time it’s shown in real time and never leaves the cockpit and so we see Sully and co-pilot Skiles deal with the situation as it happens.

Both sequences are incredibly intense, and they provide some of the best cinematic moments of the year.

And both Eastwood and the script take full advantage of our emotions.  We follow a few of the passengers specifically, including a man flying with his two adult sons, and after the landing, they are separated.  Later, once they find each other, one of the sons exclaims, “Can you believe this?  We crashed!  And we all survived!”  It’s the perfect sentiment as it is what everyone in the audience is thinking.

The sequence after the crash, when everyone is in the water, waiting to be rescued by the oncoming ferryboats and New York rescue crews is also intense because the water is icy cold and the rescuers only have minutes to work with.  Later, Aaron Eckhart’s Skiles declares, “I’ve never been happier to be in New York!”

Tom Hanks is superb as Sully.  The best part of his performance is the self-doubt he puts himself through, wondering if perhaps his instincts were wrong.  Hanks also shows how important duty is to Sully.  Once they land in the water, he makes sure he’s the last one off the plane, that everyone has gotten off, and he doesn’t relax until he knows for sure that no one has died.  The moment the news is relayed to him that all 155 people on board have been accounted for is one of the more emotional moments in the movie.

Like Eastwood and his previous film, AMERICAN SNIPER, Hanks in his previous movie BRIDGE OF SPIES (2015) may have had a more challenging assignment in that he played a more complicated character.  But as Sully, Hanks is excellent.  It’s another terrific peformance by the very talented actor.

Aaron Eckhart is also memorable as co-pilot Jeff Skiles.  And the rest of the cast, in smaller roles, are all solid.

The past few weeks have seen the release of some outstanding movies, like the critically acclaimed HELL OR HIGH WATER (2016), and the under-the-radar HANDS OF STONE (2016).  SULLY is right up there with these gems, perhaps even the best of the bunch.

It’s certainly the most inspiring and emotionally satisfying.