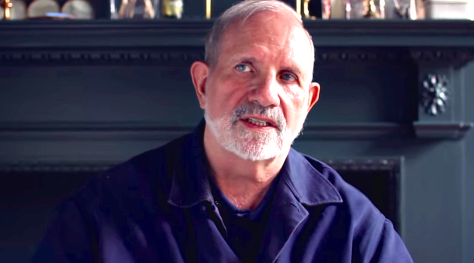 Brian De Palma has a lot to say about his career.

And in DE PALMA (2016), the new documentary on the acclaimed movie director by Noah Baumbach and Jake Paltrow, he gets nearly two hours to do just that.

The film is actually footage from an interview Baumbach and Paltrow shot with De Palma back in 2010.  They liked the footage so much they added lots of film clips and turned it into a documentary.

DE PALMA pretty much plays like a one person movie panel.  Brian De Palma is front and center speaking to the camera for nearly the entire movie, with appropriate film clips thrown in to highlight his points and stories.  As such, it’s not going to win any awards for creative cinematography.

Back in his heyday, in the 1970s and 1980s, Brian De Palma was a polarizing and controversial movie director, infamous for his ultra-violent yet stylish movies, especially for over-the-top scenes of violence against women.  He was also known for his Hitchcock homages which critics often slammed as simple knock-offs.

De Palma continues with how he began to make a name for himself with films like SISTERS (1973), PHANTOM OF THE PARADISE (1974), and OBSESSION (1976).  He called Genevieve Bujold’s performance the best part of OBSESSION, and Cliff Robertson the worst part, explaining that Robertson, once he saw that Bujold was stealing the show, tried to sabotage the movie by making things as difficult as possible for both Bujold and De Palma.

Later that same year De Palma was offered the project which would launch his career, CARRIE (1976), based on the novel by Stephen King. De Palma lamented that the studio really didn’t get behind CARRIE since they viewed it as just a gory horror movie, but to his delight, both Sissy Spacek and Piper Laurie were nominated for Oscars.

After the success of CARRIE, De Palma received a huge budget for his next movie, THE FURY (1978) which happened to be the first Brian De Palma movie I ever saw.

De Palma said he was heavily criticized for power drill murder scene in BODY DOUBLE, especially for making the drill so big, but as he explained, the drill was gigantic because in order for the scene to work, Craig Wasson’s character had to see it coming through the ceiling, and for that to happen, the drill had to be huge.  As De Palma explains it, it made perfect sense to him because it was simply part of the story.  He said he never intended to create extra violent scenes against women, but that those scenes existed only to satisfy the stories he was telling.

In the middle of these films came SCARFACE (1983), starring Al Pacino.  De Palma tells the story of how he was so annoyed at the ratings board for not giving his film an “R” rating even after all his edits, especially to the chain saw scene, that once he did receive the “R” rating, he went back and released the unedited version anyway.

He also said, and it’s true, that the way he edited the infamous chain saw scene, you never see the chain saw cut into the victim’s flesh.  I recently re-watched SCARFACE for the first time in years and I was surprised at how little De Palma showed in that scene.  It’s really not that gory at all.

After the comedic flop WISE GUYS (1986), De Palma made the movie that once more resuscitated his career:  THE UNTOUCHABLES (1987), which just might be De Palma’s most popular movie, but strangely, it’s one of my least favorite films that he made.   Oftentimes I find De Palma’s camerawork overbearing.  The famous “shoot-out with the baby carriage falling down the stairs” scene in THE UNTOUCHABLES, for example, I find almost unwatchable because of the pretentious slow-motion camerawork.  Some see it as cinematic genius, but for me it’s just cinematic overkill.

Likewise, in his discussion of CARRIE, De Palma talks about the complicated shots he conceived for the end of CARRIE and how the producers were unhappy with the results, to which De Palma says they just didn’t get the genius of his work.  While this may be true, the climactic bloodbath in CARRIE is another example where the camerawork gets in the way of the story.  To me, and this is why I’m not the biggest De Palma fan, if you’re going to use the camera creatively, you have to do it in a way where it empowers the story, not detracts from it.  Spielberg does this all the time.  De Palma does not.

His next film was CASUALTIES OF WAR (1989), the gripping Vietnam movie starring Michael J. Fox and Sean Penn.  This one I did like, and it’s probably my favorite Brian De Palma movie of all time.  I remember seeing it at the movies and being blown away by its potency.

De Palma tells some interesting anecdotes from the set of CASUALTIES, specifically of how Sean Penn used to torment Michael J. Fox.   At one point, Penn was supposed to whisper a line in Fox’s ear about payback, but De Palma heard Penn say, “TV actor!”  De Palma felt Penn’s antics caused Fox to feel alienated and defensive on set, which ultimately helped Fox’s performance since his character was supposed to feel the same way.

This was followed by one of De Palma’s biggest flops, THE BONFIRE OF THE VANITIES (1990), a downward trend that would continue over the next few years.  After a brief surge from the Tom Cruise vehicle MISSION IMPOSSIBLE (1996), De Palma’s career bottomed out with the woeful MISSION TO MARS (2000) which was the last movie to date that De Palma shot in the United States.  His subsequent films have all been made in Europe.

DE PALMA is not the most riveting documentary I’ve ever seen nor even the most informative.  Its style is simple.  De Palma speaks directly to the camera the entire time, and when he’s not on screen, we’re treated to appropriate movie footage, which is  used here effectively.

De Palma also isn’t the most animated speaker around, but he does provide plenty of stories and anecdotes. He also asks questions.  For example, De Palma points out that although people have praised Alfred Hitchcock as a cinematic genius, no one else except for De Palma himself has ever tried to use Hitchcock’s style.  He asks why more directors aren’t making movies like Hitchcock did?  It’s a fair question.

Maybe part of the answer is that De Palma’s homages to Hitchcock never really worked all that well.  Part of the reason they didn’t work was they were too closely based on the Hitchcock movies they were paying homage to. Had De Palma used Hitchcock’s style in stories that were original and not derivative of specific Hitchcock movies, he may have had better results.

For Brian De Palma fans, DE PALMA is must-see viewing.  For the rest of us, it’s a chance to see and listen to a film director reflect back on his entire body of work.  And whether you’re a fan of De Palma or not, you have to give the guy credit for his persistence and for sticking to his guns when it came to making movies the way he wanted to make them.