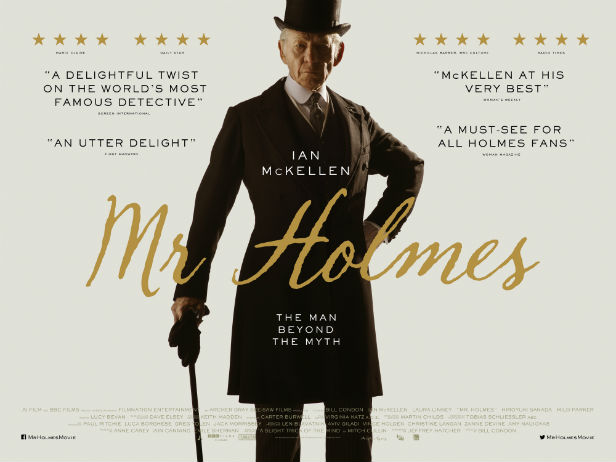 We all grow old.  Even Sherlock Holmes.

That’s the premise of MR. HOLMES (2015), the story of an elderly Sherlock Holmes (Ian McKellen) trying desperately to remember the details of his final case, a case which ended so horribly it convinced him to retire.  But remembering is no easy task since he’s dealing with early stages of dementia.

Holmes, now in his 90s,  lives in a plush quiet home in the country along with his housekeeper Mrs. Munro (Laura Linney) and her young son Roger (Milo Parker). The year is 1947, and Holmes has been retired for thirty years.

He finds himself haunted by his final case, because he knows the events of that case caused him to retire outright.  The trouble is, he cannot remember any of it.  He tries all sorts of methods to stimulate his memory, but what he finds works best and inspires him most is spending time with young Roger, who loves Holmes and constantly encourages him to come out of retirement and solve another case.  So Holmes spends considerable time with the boy, often teaching him about beekeeping, in the hope that his memory will return.

And it does, but in bits and pieces and over the course of the movie, where we learn the fascinating details of the case which led Sherlock Holmes to an early retirement.  Since this is a mystery, the less said about the plot the better.

There are several reasons to see MR. HOLMES.  One is the cinematography.  The English countryside has never looked more inviting.

Better than the cinematography is the acting, led of course by Ian McKellen as Sherlock Holmes.  McKellen does more with just his facial expressions in this movie than most actors accomplish with their entire bodies.  Director Bill Condon takes full advantage of close-ups of McKellen’s face, showing us the pain, annoyance, wisdom, frustration, and flat out devastation felt by the aged Holmes.

As Holmes, Ian McKellen shows us a man struggling with memory loss, who at times still possesses the mental faculties which made him the world’s greatest detective.  He can be grumpy and aloof, but also compassionate and caring.  And in flashbacks from thirty years earlier, we witness a Holmes in his 60s working on that fateful case which would force his retirement.  McKellen handles these different stages of Holmes’ life with relative ease.

Young Milo Parker as the boy Roger is the perfect complement for McKellen’s Holmes here, and the two share the best scenes in this movie.  Laura Linney is also very good as Roger’s mother and Holmes’ housekeeper Mrs. Munro.  Tired of Holmes’ crabbiness and lack of cooperation, she actively wants to seek employment elsewhere, but that’s the last thing Roger wants since he idolizes Holmes.  It’s also not what Holmes wants since his time with Roger seems to be the only thing that sparks his memory.

The rest of players also do a very good job.  MR. HOLMES features splendid acting throughout.

The screenplay by Jeffrey Hatcher, based on a novel by Mitch Cullen, and using characters written by Arthur Conan Doyle, works on multiple levels.  It’s a poignat tale about the relationship between a very old person, Holmes, and a very young person, Roger, and on this level alone the film succeeds.  But it’s also a very compelling mystery, as Holmes’ final case involves the investigation into a supposed unfaithful wife, as well as a fateful trip to China.

Director Bill Condon does a nice job here.  For a film about an elderly Sherlock Holmes, the pacing is quick, and the film flies by, even though it is an hour and 44 minutes long.  Condon also directed McKellen in GODS AND MONSTERS (1998), an excellent movie about FRANKENSTEIN director James Whale, in which McKellen starred as the famous filmmaker.  But Condon also directed the last two TWILIGHT movies.  MR. HOLMES, no surprise, is much closer in quality to GODS AND MONSTERS than to the dreadful TWILIGHT films.

The other thing I liked about MR. HOLMES is that in spite of its central character dealing with dementia, the film resists the temptation to overplay the sympathy card.  Holmes harldly speaks of his memory troubles.  He just deals with them.

MR. HOLMES is an outstanding period piece, featuring a superb performance by Ian McKellen as Sherlock Holmes, and solid acting by the rest of the cast.  It’s well-directed, exhibits beautiful cinematography, and contains a first-rate mystery to boot.

It’s elementary, my dear Watson.  This one is definitely worth a look.