Welcome back to THE HORROR JAR, that column where we look at lists about horror movies.  Up today:  John Carpenter/Kurt Russell movies.  Yup, a look at the movies in which horror master John Carpenter directed former child star turned action hero Kurt Russell. 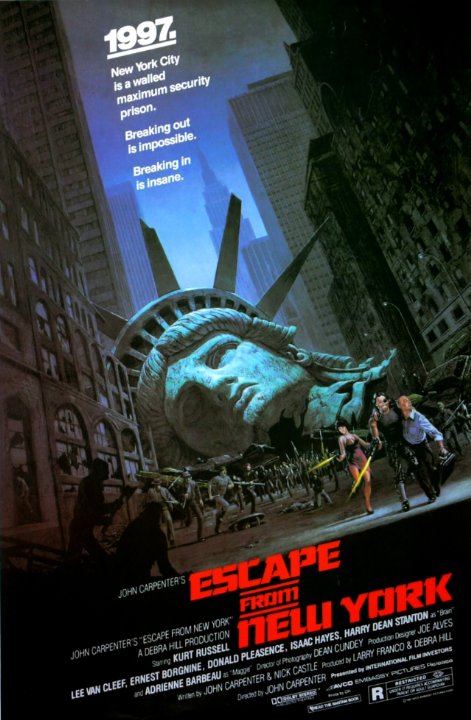 Yup, the first time Carpenter and Russell worked together was on the made-for-TV movie about the life of Elvis Presley.  Pretty good bio pic, and Russell makes for a very good Elvis.  Interestingly, Elvis’ father Vernon Presley is played by Russell’s real life dad Bing Russell, and Elvis’ wife Priscilla Presley was played by Russell’s real life wife at the time, Season Hubley.  All in the family, I guess.

Carpenter’s next movie after his horror hits HALLOWEEN (1978) and THE FOG (1980).  Not really well received upon its initial release, this dark action thriller has nonetheless aged well.  Actually, looking back, Carpenter clearly was a victim of his own success.  After his megahit and masterpiece HALLOWEEN, Carpenter made three straight quality films:  THE FOG (1980), ESCAPE FROM NEW YORK (1981) and THE THING (1982).  All three were panned by critics at the time, yet today they are regarded as some of the finest genre films of the past 40 years. In fact, for some, his version of THE THING is the best horror movie ever.

ESCAPE FROM NEW YORK was a milestone film for Kurt Russell, pretty much the movie that broke him out of his previous persona as being a teen actor in Disney movies.  Carpenter wrote the role of Snake Plissken for Clint Eastwood, and when Russell got the part, he played the role with Eastwood in mind.

Fun film, with yet another quality music score by director Carpenter.  It’s nearly as good as his HALLOWEEN score.

Screenplay:  Bill Lancaster, based on the story “Who Goes There?” by John W. Campbell, Jr.

Critically panned when it first came out in 1982, Carpenter’s THE THING is now regarded as a horror/science fiction classic.  For many horror film buffs it’s their favorite horror movie of all time.  A flop at the box office, it left my local theater within a week and I was not able to see it.  I caught it several months later when it appeared on something called a”VHS cassette.”  Yes, it was 1983 and the VHS age was just beginning.  I wasn’t the only one who saw it on home video.  Suddenly everyone I knew was talking about THE THING, and it’s a film that since then has never looked back.

Kurt Russell is excellent as Macready, in effect reprising his Snake Plissken tough guy persona, this time going up against a deadly alien monster from outer space.  Very scary flick, with gross-out special effects that were considered unspeakably over-the-top and tasteless back in 1982.  Now they’re regarded as some of the best effects of their time.

Curious, Carpenter did not provide the music for this one, as that honor went to composer Ennio Morricone, who’s responsible for the chilling score for this shocker.

Silly action adventure has its fans.  I’m not one of them.  Kurt Russell and Kim Cattrall run afoul of Chinese gangs, martial arts, and the supernatural.  Mostly played for laughs.

Forgettable sequel to ESCAPE FROM NEW YORK finds Snake Plissken this time getting into trouble in L.A. in an effort to once again help the U.S. government which once more seems to be the last thing Plissken really wants to be doing.

There you have it, the list of movies pairing director John Carpenter and actor Kurt Russell.  My two favorites are clearly ESCAPE FROM NEW YORK (1981) and THE THING (1982).

One thought on “THE HORROR JAR: JOHN CARPENTER/KURT RUSSELL MOVIES”