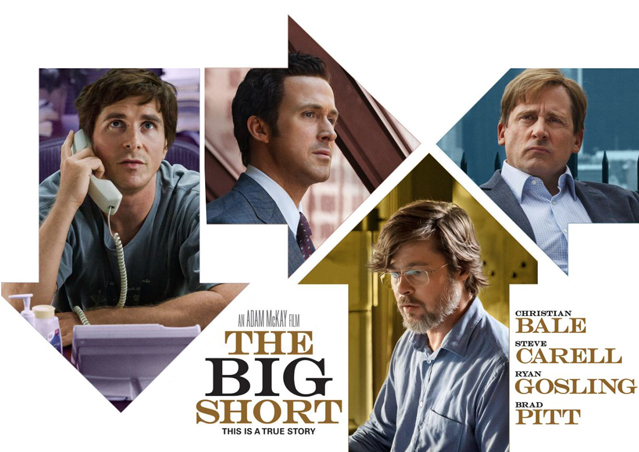 Not so long ago, in a galaxy not very far away, a great misadventure took place: in 2008 the banks of the United States and the world collapsed, tanking the economy, putting people out of work, and generally wreaking havoc, all because of fraudulent practices by big banks.

THE BIG SHORT (2015) tells the incredible story of how this all went down, seen through the eyes of several different parties, who had one thing in common:  they looked at the numbers and predicted the mortgage industry would collapse, and they all decided to make money off this information, except things didn’t turn out as they had planned.

Michael Burry (Christian Bale) is a socially awkward numbers genius who one day sees inconsistencies in the mortgage market, and he makes the bold prediction that these mortgages long considered to be solid and financially sound will collapse.  Much to the shock of the stockholders of his company, Burry invests nearly all his company’s funds against the housing market.  He tells his stockholders that when the mortgages fail they will make lots of money.  Of course, mortgages have never failed to that degree, and so his stockholders think he’s crazy.

Others on Wall Street soon catch wind of Burry’s betting against the housing market, including Jared Vennett (Ryan Gosling) who contacts Mark Baum (Steve Carrell) and his small Wall Street team of investors.  Before Baum accepts Vennett’s offer to buy into the deal, he decides to investigate the mortgate situation for himself.  What he and his team discover sickens him.

He finds mortgage lenders getting approval for variable rate loans from banks without even needing to show proof of their clients’ employment or income.  He listens as these lenders brag about targeting immigrants who don’t understand what will happen to them if their variable rate should ever skyrocket which Baum knows is about to happen.  Baum also knows that these homeowners— some owning multiple homes with multiple mortgages— will never be able to make their payments once the rates go up, and it becomes clear quickly to Baum that the mortgage industry— in fact the entire U. S. economy – is going to tank.

The best part of THE BIG SHORT is that it takes a complicated story and makes it both interesting and easy to understand.

Director Adam McCay, known for his comedies, films like ANCHOROMAN:  THE LEGEND OF RON BURGUNDY (2004) and THE OTHER GUYS (2010), uses his comedic background to create a lively vehicle and turn an otherwise depressing story into a very interesting and highly entertaining tale.  For example, whenever there’s a complicated financial or Wall Street term in need of explanation, the film employs the gimmick of having a celebrity appear and explain the information using terms they know and that the audience understands.  It’s fun, and better yet, the explanations make sense.

THE BIG SHORT also boasts a creative script by Charles Randolph and director McCay, who also wrote the screenplay for the excellent Marvel superhero film ANTMAN (2015) earlier this year.  The characters often turn to the camera and address the audience, clueing us in on things that are contrary to what other characters say or do. For example, in one funny bit Vennet tries to impress Baum and his team by introducing them to his math guy, a Chinese mathematician, and Vennett says that he can’t even speak English and that he’s just a genius with numbers, at which time the mathematician turns to the camera and says, “Actually, I do speak English, but Jared always says that because he believes it makes me seem smarter.”

The style is quirky throughout, but that’s not to say the film is a comedy.  It’s not, and it takes its subject seriously.  At one point, for example, two of the characters who stand to make a ton of money off the housing collapse start to celebrate when they’re berated by the man they’ve leaned on for help, former Wall Street insider Ben Rickert (Brad Pitt) who lays into them with what the collapse actually means to people in the nation. people who will lose homes and income.  It’s a sobering moment.

THE BIG SHORT is driven by its acting performances and they are all excellent.  Christian Bale is getting most of the hype for his performance as oddball Michael Burry, as there is Supporting Actor buzz surrounding his performance.  Bale is very good, but I actually was even more impressed by Steve Carrell and Ryan Gosling.

Steve Carrell’s performance as cynic Mark Baum is the glue that holds this movie together.  He’s the character audiences will no doubt most relate to since he’s the guy who uncovers most of the shocking information, and he’s also the one who reacts to it. He is totally disgusted by  the fraudulent unchecked behavior of the banks.

Ryan Gosling is also excellent as the high octane Jared Vennett.  At times you’re not sure whether to like or hate the guy.  And Brad Pitt in a smaller role also does fine as the former Wall Street insider Ben Rickert who assists two young friends make a ton of money simply because they asked for his help.

The term “short” refers to short-selling, buying low and selling high, which in effect is what these guys were doing when they were betting that the mortgage industry would fail.  In this case, their mega-deal was “the big short.”

The world of Wall Street does not interest me in the least.  I guess that’s why I’ll always be a “starving artist.”  But that didn’t stop me from really enjoying THE BIG SHORT.

If you want to understand what went wrong with the housing market in 2008, and how it was that this ordeal which in effect crippled our economy was allowed to happen, go see THE BIG SHORT.

It’s a wise investment of your time.