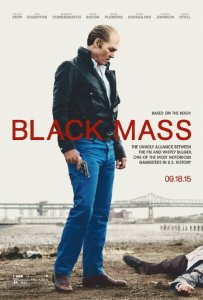 BLACK MASS, the lurid bio pic of Boston mobster Whitey Bulger is as heartless and cold as its subject, and this isn’t necessarily a good thing.

Sure, Johnny Depp is near brilliant as Bulger, and co-star Joel Edgerton might be even better as FBI agent John Connolly, and both men lead a very talented cast, but Bulger’s story is as ugly as his crimes, and the result is a soulless movie that is difficult to like, in spite of its strengths.

For John Connolly (Joel Edgerton), life is about loyalty, and he sees as his ticket to success as an FBI agent reaching out to his childhood friend from his old neighborhood, Jimmy “Whitey” Bulger (Johnny Depp) to form an alliance to work together to take down the Italian mob.  Connolly sees this relationship as his best chance for making it big, while Bulger views it as a business transaction to get the FBI to do his dirty work and take down his enemies for him.

And so faster than you can say “Don Corleone” John Connolly is bringing down members of the Italian mafia while Bulger moves from small time hood to the criminal mastermind of Boston, all while the FBI turns a blind eye towards him because of the information he is providing them.   The feds, led by Agent Charles McGuire (Kevin Bacon) constantly ask why they’re shielding Bulger, but each time the questions are raised Connolly comes to Bulger’s defense and sweet talks his superiors into letting the arrangement continue.

It’s not until a new superior Fred Wyshak (Corey Stoll) comes onto the scene, arriving in Boston from Philadelphia and decides to make it his business to go after Bulger that the arrangement between Bulger, Connolly, and the FBI unravels.

Johnny Depp is as good as advertised and leads a powerful cast in this effective crime drama.  That being said, “Whitey” Bulger is such a cold-hearted unlikable character that a movie about him is just as unlikable.

Joel Edgerton is every bit as good as Depp as FBI man John Connolly, but Connolly isn’t any more likeable than Bulger.  He’s loyal to his gangster buddy rather than to the FBI, and his arrangement with his childhood friend does more to raise crime in Boston than quash it.

Benedict Cumberbatch is also notable as Bulger’s politician brother Billy Bulger, but he rounds out the triumvirate of unlikable characters.  He’s not any more engaging than his mobster brother.  Three central characters.  Three unlikable souls.

Some stand-outs in smaller roles include David Harbour as Connolly’s willing and spineless partner John Morris.  The scene where “Whitey” torments him over dinner about his willingness to give up a family recipe is one of the better scenes in the movie.  Jesse Plemons makes good as a young man whose loyalty and devotion make him a “Whitey” favorite.  Plemons played a similar role during the final season of BREAKING BAD.

Dakota Johnson makes the most of her brief screen time as “Whitey’s” girlfriend Lindsey Cyr, and the scene where they argue over the fate of their young son is a keeper.  Peter Sarsgaard is effectively paranoid and hyper as the frightened loose cannon Brian Halloran.  W. Earl Brown and Rory Cochrane are memorable as “Whitey’s” loyal henchmen, and Julianne Nicholson is effective as Connolly’s fed up and frightened wife Marianne.  The scene where “Whitey” “visits” her in her bedroom is one of the more menacing moments in the movie.

The screenplay by Mark Mallouk and Jez Butterworth, based on books by Dick Lehr and Gerard O’Neill, does a nice job showing how coldhearted “Whitey” Bulger was and explaining how his arrangement with John Connolly and the FBI came to pass, but in terms of creating compelling characters, it falls short.  It’s all very stoic and cold.  When the tide turns on John Connolly and he’s facing arrest, I didn’t feel for him at all.

The direction by Scott Cooper captures the feel of 1970s Boston, and it certainly shows the ruthlessness of “Whitey” Bulger, but as an entire package, I found his previous movie OUT OF THE FURNACE (2013) much more compelling.  Its story was better, and its characters were deeper and richer. BLACK MASS has characters I really had no interest in learning more about.

Still, BLACK MASS is a decent movie, worth a trip to the theater. It’s not sugar-coated, and it’s not glorified.  It is what it is:  a lurid tale of a Boston mobster.

What it does better than anything else is give you a seat at the dinner table right next to “Whitey Bulger,” up close and personal.  And that’s simply not a place I want to be at for very long.