Here’s my latest IN THE SPOOKLIGHT column, on the Boris Karloff classic THE BRIDE OF FRANKENSTEIN (1935), published this month in the September 2015 HWA NEWSLETTER. 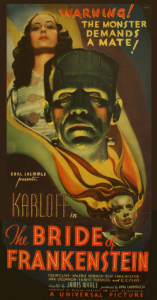 Time to put the frivolous films of summer aside in favor of the horror movie heavyweights, time for one of the most critically acclaimed horror movies of all time, THE BRIDE OF FRANKENSTEIN (1935).

In the annals of mainstream cinema, there are very few horror movies which earn a four star rating. THE BRIDE OF FRANKENSTEIN is one of them.  Not only is it considered a better movie than its predecessor, FRANKENSTEIN (1931) but it’s widely viewed as the best FRANKENSTEIN movie ever filmed.  While it’s hard to argue against this assertion, I actually prefer FRANKENSTEIN over BRIDE since it’s a scarier film, but that doesn’t take away my appreciation for BRIDE.

THE BRIDE OF FRANKENSTEIN opens with a prologue in which Mary Shelley (Elsa Lanchester, who also plays the titled Bride of Frankenstein later in the movie) tells her husband Percy Shelley and fellow Romantic poet Lord Byron that her story did not end with the Monster perishing inside the burning windmill.  There’s more to the tale, she says.

The action then segues to just after the conclusion of FRANKENSTEIN, with the villagers watching the windmill burn to the ground, and we quickly see that the Monster (Boris Karloff) has survived the fire and escapes.  Henry Frankenstein (Colin Clive) survives as well, and he resumes his plans to marry Elizabeth (Valerie Hobson), but these plans are interrupted when he’s visited by his old professor, Dr. Pretorious (Ernest Thesiger) who tries to convince Henry to continue his experiments, but Henry is not interested.

Meanwhile, the Monster is loose in the countryside, inadvertently terrifying everyone he comes in contact with.  He’s hunted down and briefly chained in a prison before he escapes.  In the film’s most touching scene, he befriends a blind hermit (O.P. Heggie) who teaches the Monster how to speak and shows him considerable compassion, even prompting the Monster to shed a tear at one point.  But even this ends badly when two hunters happen upon the hermit’s cabin and “rescue” him from the Monster.

By far the best part of THE BRIDE OF FRANKENSTEIN is the development of the Frankenstein Monster.  The role is taken to a whole other level, and Boris Karloff delivers a brilliant performance.  This time around, the Monster is conscious of who he is and how he came to be.  When Pretorious asks him if he knows who he is and who Henry Frankenstein is, he answers, “Yes, I know.  Made me from dead.  I love dead.  Hate living.”

And of course the Monster learns how to talk in this movie, which is a huge development in the story and makes the Monster an entirely deeper character than he was in the first film.  Sure, it takes away some of his frightening brutality, but it also makes him much more interesting.

The look of the Monster is also unique in BRIDE, as make-up artist Jack Pierce singed the Monster’s hair and face to show that he had been burned in the windmill.

Colin Clive returns as Henry Frankenstein, and once again, he’s excellent in the role.  Clive broke his leg shortly before filming, which is why in the majority of his scenes in THE BRIDE OF FRANKENSTEIN he’s sitting down. Sadly, Clive died two years later in 1937 from pneumonia as a result of his alcoholism, and he never lived long enough to see or take advantage of his increasing fame through the decades as the iconic Henry Frankenstein in these two classic Frankenstein movies.

Stealing the show, however, is Ernest Thesiger as the evil Dr. Pretorious, in a role originally offered to Claude Rains.  Thesiger is a delight to watch, as he instigates Henry Frankenstein throughout, eventually teaming up with the Monster in order to force Henry to create the Monster’s mate.  Thesiger’s Pretorious is a nice precursor to Peter Cushing’s interpretation of Baron Frankenstein in the Hammer Films, although Cushing would take things a step further and make his Baron an even darker character.  It’s a shame Thesiger’s Dr. Pretorious only appeared in this one Frankenstein movie.

Ernest Thesiger steals the show as the conniving Dr. Pretorious in THE BRIDE OF FRANKENSTEIN.

Dwight Frye, who famously played the hunchback assistant Fritz in FRANKENSTEIN after his even more famous role as Renfield in DRACULA (1931) appears in BRIDE as the grave robber/murderer Karl who assists Pretorious and once again has the distinction of being murdered by the Monster.  The original role of Karl was much bigger and included a scene where Karl murders his aunt and uncle and then blames the Monster for the crime, which is why at the end of the movie the Monster goes out of his way to kill Karl.  These scenes were cut prior to the film’s release.

The iconic Bride with the lightning-strike hair was played by Elsa Lanchester, who made such an impression with this role it’s easy to forget that she’s only in the movie for about five minutes, and that’s it!  Yet she hisses her way to infamy, prompting the Monster to complain, “She hate me!  Like others!”   Ah, the pains of dating!

The Monster (Boris Karloff) is bound by the angry mob.

Director James Whale, who directed FRANKENSTEIN, is at the helm once again for THE BRIDE OF FRANKENSTEIN and he does another masterful job.  He sets up several memorable scenes in this one, even making the Monster a Christ figure. When the mob binds the Monster and hoists him up on a huge pole where he hangs for several moments as they throw sticks and stones at him, the scene definitely brings to mind a crucifixion.  And in the sequence with the blind hermit, as the Monster sheds a tear, just before the camera fades to black, it focuses on a crucifix which illuminates and remains the sole image after the fade.

The scene where the villagers pursue the monster is shot with a moving camera, and it’s every bit as impressive as the chase scene at the conclusion of FRANKENSTEIN.  Henry Frankenstein’s lab is bigger in this sequel, and the bride creation sequence is more elaborate than the creation scene in the original, as this one includes flying kites high above the roof of the laboratory.

The one thing lacking in THE BRIDE OF FRANKENSTEIN that FRANKENSTEIN did better is scares.  The Monster in FRANKENSTEIN as played by Boris Karloff was a brutal unstoppable force that was frightening every time he was on screen, not because he was evil, but because he was tremendously strong and unpredictable, possessing raw incredible strength unchecked by learning or experience.  In FRANKENSTEIN, the Monster had no knowledge of life and death, right and wrong.  But in THE BRIDE OF FRANKENSTEIN the Monster does know, which makes him a much more fascinating character, and since he develops a conscience rather than become evil, he’s much less frightening.

The screenplay by William Hurlbut and a host of uncredited writers is thought-provoking throughout. THE BRIDE OF FRANKENSTEIN is critically acclaimed because it takes the infamous murderous Monster from FRANKENSTEIN and humanizes him, enabling him to reflect upon his existence, which ultimately causes him even more tragedy and pain.

THE BRIDE OF FRANKENSTEIN also contains a phenomenal music score by Franz Waxman.

Without doubt, THE BRIDE OF FRANKENSTEIN is one of the best horror movies ever made.  It was a hit and a critical success upon its initial release in 1935, and today, 80 years later, its reputation is even stronger.

Looking for first-rate horror movie fare this September?  Look no further than Boris Karloff and Elsa Lanchester in THE BRIDE OF FRANKENSTEIN.

It’s one wedding you don’t want to miss!