THE QUOTABLE CUSHING:  THE SATANIC RITES OF DRACULA (1973) 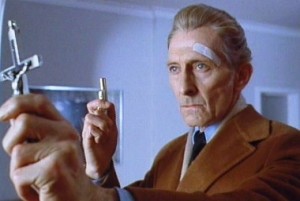 Welcome back to THE QUOTABLE CUSHING, that column where we celebrate classic lines of dialogue from Peter Cushing movies.

Today we look at the final Dracula movie starring both Christopher Lee and Peter Cushing, THE SATANIC RITES OF DRACULA (1973).

Hammer made the ill-fated decision— influenced by the enormous success of Dan Curtis’ THE NIGHT STALKER (1972) which featured a superhuman vampire terrorizing modern day Las Vegas— to update their Dracula series to modern times.  And so they came out with DRACULA A.D. 1972 (1972) which brought Dracula (Christopher Lee) into the 1970s in the midst of the far-out groovy man culture while taking on Lorimer Van Helsing (Peter Cushing), a descendant of the original Van Helsing.

DRACULA A.D. 1972 bombed at the box office, which meant Hammer’s follow-up, THE SATANIC RITES OF DRACULA, received a small release and didn’t make its way to the United States until five years later in 1978, under the alternate— and inferior— title COUNT DRACULA AND HIS VAMPIRE BRIDE.

Another reason I’ve never been a big fan of SATANIC RITES— and don’t get me wrong, I still like this movie— is that Peter Cushing doesn’t really have many memorable scenes or lines of dialogue in this movie.

The plot in SATANIC RITES largely follows Scotland Yard Inspector Murray (Michael Coles), back from DRACULA A.D. 1972, as we works closely with British intelligence as they try to break up a mysterious satanic cult which happens to be run by Dracula.  The intelligence agency is interested in this cult because some of the most powerful men in the country, including the head of their department, belong to it.  Peter Cushing’s Van Helsing is called in by Murray as a consultant, and he helps with the investigation, which of course, ultimately leads them to Dracula (Christopher Lee).

In this scene, Inspector Murray seeks Van Helsing’s advice as to what he thinks they’re dealing with, based on the evidence of their investigation so far:

INSPECTOR MURRAY:  So, what do you think, professor?  Is it just a black mass ritual?

VAN HELSING:  No.  No, not exactly.  In the Dark Ages, the worship of natural substances was quite common.  Soil, water, sand of the desert, various plants.  But the strongest cults were those that worshipped the most mystical substance of all, the fountainhead of life itself, the glorification of blood.  And more often than not, human blood.

TORRENCE:  Are these men involved in this business because they’re under some kind of threat?  Or drugs?

VAN HELSING:  Or hypnosis?  This particular evil is more potent, more addictive than heroin, I assure you.  And the end result is just as fatal.

Freddie Jones gets some of the best lines in the movie as Professor Keeley, Van Helsing’s colleague who is now part of Dracula’s cult.  In this scene, Van Helsing visits his old friend to find out if indeed he’s become part of the satanic cult.  Keeley takes the opportunity to sail into his former colleague, telling him about the value of evil.  It’s one of the best pieces of dialogue in the movie, superbly acted by Jones:

KEELEY:  Evil rules, you know.  It really does.  Evil and violence are the only two measures that hold any power.  Look at the world— chaos.  It is a preordained pattern.  Violence, greed, intolerance, sloth, jealousy.  The deadly sins.  All the deadly virtues.  The Supreme Being is the devil, Lorimer.  Serve him, and he offers you immortality.  He’ll remove death, the common enemy.  Nothing is too vile.  Nothing is too dreadful, too awful.  You need to know the terror, the horror, Lorimer.  You need to feel the threat of disgust, the beauty of obscenity.

At which time Peter Cushing grabs Jones by the shoulders and slaps him across the face, in order to slap some sense into him.

The best scenes in this one are when Van Helsing and Dracula confront each other.  Van Helsing’s investigation has led him to a rich tycoon named D.D. Denham who seems to be financing the cult.  Denham is a recluse, and Van Helsing wisely believes that Denham is really Dracula.

When Van Helsing arrives at Denham’s high rise office, Denham aims a bright desk lamp at him, to prevent Van Helsing from seeing his face.  Denham also speaks with an accent.  These are both attempts by Dracula to conceal his identity from his adversary.  Christopher Lee chose to do this scene with a Bela Lugosi accent in homage to his Dracula predecessor.

DENHAM:  I have been expecting you.

DENHAM:  There is a group of us who are determined that the decadence of the present day can and will be halted.  A new political regime is planned.

However, Van Helsing is not swayed.

VAN HELSING:  Evil begets evil.  There is an unholy aura in this place.  And it is not a question of a little occultism, or a touch of mysticism, Mr. Denham.  It is vampirism.  And there’s a host of damned souls at Pelham house.  What are you going to do with me?   You can’t let me go, can you?  I know too much.  Do you mind if I smoke?  A bad habit, I know, but it helps me to concentrate.

At this moment, Van Helsing “accidentally” knocks some books off Denham’s desk.  When he bends down to pick them up, he secretly slips in a Bible and places it on Denham’s desk.

DENHAM:  You are an interfering man, Professor.  Do not meddle, or you will have to deal with me!

As Denham pounds his desk, his fist lands on the Bible, and he hisses in pain as his hand sizzles with burning smoke.  Van Helsing leaps from his chair and turns the light on Denham’s face, seeing clearly that D.D. Denham is indeed Count Dracula.

VAN HELSING:  You are Count Dracula!  Of course, Mr. Denham, the powerful recluse.  Here, you’re safe.  No one expects to see him in the daytime.

Van Helsing pulls out a crucifix and prays in Latin.  He then pulls out a gun and aims it at Dracula, and Dracula smiles.  When Dracula next speaks, it is no longer with an accent but in Lee’s deep resonating voice.

Dracula stops smiling, but his fear is short-lived, as members of his cult come to his rescue and overpower Van Helsing.  They tell Dracula to kill Van Helsing, but Dracula explains that he has other plans for his nemesis.

DRACULA:  It cannot be made so simple for him, not for Van Helsing. Nor for his granddaughter.

And it’s Lee’s Dracula who gets some of the best lines during the film’s climax.  Dracula leans into the unconscious Jessica Van Helsing while he speaks to a restrained Van Helsing.

DRACULA:  The girl you love is mine already, and through her you will yet do my bidding.

But you do get some good lines, like this one, when you chase Van Helsing around the burning house:

DRACULA:  My revenge has spread over centuries and is just begun!

Wrong again.  You’re about to be destroyed by Van Helsing for the final time.

Okay, that’s it for now.  I hope you enjoyed today’s QUOTABLE CUSHING column on THE SATANIC RITES OF DRACULA. Join me again next time with more quotes from another Peter Cushing movie.