And just a friendly reminder, if you like this column, my book IN THE SPOOKLIGHT, a collection of 115 horror movie columns, is available from NECON EBooks as an EBook at www.neconebooks.com, and as a print edition at https://www.createspace.com/4293038.

For those of you who like numbers, this review marks my 75th original “In The Spooklight” column.  I hope you’ve enjoyed the ride.

To celebrate the occasion, I’ve chosen one of my favorite Peter Cushing movies from the 1960s, ISLAND OF TERROR (1966).  The film was directed by Hammer veteran, Terence Fisher, who helmed some of Cushing’s best work at Hammer, including THE CURSE OF FRANKENSTEIN (1957) and HORROR OF DRACULA (1958).  Interestingly enough, ISLAND OF TERROR was not made by Hammer.  It was produced by Planet Productions and was the first of back-to-back very similar science fiction movies made by the company, both set on an island, and both starring Peter Cushing and directed by Terence Fisher.  The latter film, ISLAND OF THE BURNING DOOMED (1967), also known as NIGHT OF THE BIG HEAT, starred Christopher Lee as well.

Also of interest, ISLAND OF TERROR was produced by Richard Gordon, a man who also produced horror movies starring Christopher Lee, Boris Karloff, and Bela Lugosi.  There may not be anyone else in the business who can make that claim.

Three things come to mind immediately when thinking of ISLAND OF TERROR – pacing, performance, and writing.

The screenplay by Edward Andrew Mann and Allan Ramsen is solid.  It tells a good story and is full of clever dialogue that remains fresh throughout the film.

It’s the story of cancer research gone wrong.  A group of scientists on a quaint little island attempt to create an organism that will devour cancer cells.  They fail, instead creating creatures that eat human bone.  The creatures slide along the ground like giant amoebas, wielding a single tentacle which they use to wrap around their victims and suck out their bones.  And, oh yeah, they duplicate every hour or so.  Not good.

Peter Cushing plays Dr. Stanley, a London pathologist who is called to the island to investigate, along with his friend Dr. West (Edward Judd), a bone specialist.

The performances are all first-rate.  Peter Cushing, as he always did in his movies, shines like the star that he was.  His gift was his ability to bring characters who aren’t real to life, and to make the impossible and the fantastic seem real.  Cushing did this always in his movies, and he made it look easy. 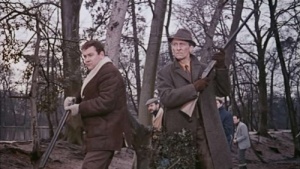 Peter Cushing (right) and friends hunting the bone eating creatures known as the Silicates in ISLAND OF TERROR.

His Dr. Stanley is somewhat of a change of pace for Cushing.  Usually Cushing’s heroes were played straight, a la Dr. Van Helsing in the Draculas.  But here Dr. Stanley is a wise-cracking witty man who is constantly spewing one-liners.  As a result, Cushing gets the best lines in the movie.

The pacing of ISLAND OF TERROR is quick and efficient.  There’s no time for boredom.  Things start before the credits roll and keep on going till the end.  The climax of the film is extremely exciting as the villagers barricade themselves inside the town hall and prepare for an all-out “last stand” against the armada of bone-sucking creatures.  And when the heroes contemplate suicide as their last option, you know things are looking bad.  But alas, this is a family friendly horror movie, and so don’t expect an ending like last year’s THE MIST (2007).

Where the movie doesn’t hold up today is in the special effects department.  Even for 1960s standards, the effects aren’t so hot, and the film works much, much better when the creatures are off screen.

A Silicate, not looking all that scary thanks to the tepid special effects.

ISLAND OF TERROR is a neat little horror/science fiction movie, the type that will always be with us, as long as scientists the world over continue to experiment with the unknown and dabble with things that make the rest of us uncomfortable and nervous.