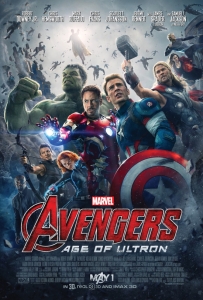 Welcome to another edition of YOUR MOVIE LISTS, the column where you’ll find lists of odds and ends about movies.  Today we’re looking at Marvel’s THE AVENGERS Movies.

Here’s a look at these movies:

IRON MAN (2008) – The film that started the AVENGERS journey.  Phenomenal movie, probably my third favorite superhero movie of all time, behind THE DARK KNIGHT (2008) and THE AVENGERS (2012).  This is the film that introduced us to Robert Downey Jr. as Tony Stark aka Iron Man, one of the most entertaining and fascinating superhero personas ever.  Directed by Jon Favreau, this is a worthy film to kick off the franchise.  Also introduced Samuel L. Jackson as Nick Fury, as well as first appearance by Clark Gregg as Agent Coulson.

THE INCREDIBLE HULK (2008) – Edward Norton makes for a credible and intense Bruce Banner aka The Hulk, and Tim Roth is even better as the main baddie.  Excellent movie, much better than Marvel’s previous HULK (2003).

IRON MAN 2 (2010) – Robert Downey Jr. is back as Tony Stark/Iron Man, as is director Jon Favreau, but this sequel is inferior to the first film and never really hits its stride.  Most notable for introducing Scarlett Johansson as Black Widow.  Both Samuel L. Jackson as Nick Fury and Clark Gregg as Agent Coulson return for this sequel.

THOR (2011) – Uneven but colorful film by director Kenneth Branagh.  The best part of this Thor origin story is Chris Hemsworth as Thor.  He’s phenomenal and provides this one with its best moments.  The scenes on Earth work better than the scenes on Asgard.  On hand once more are Samuel L. Jackson as Nick Fury and Clark Gregg as Agent Coulson.  The first appearance by Jeremy Renner as Hawkeye.

THE AVENGERS (2012) – The biggie.  Arguably the best superhero movie ever made, although I give a slight nod to Christopher Nolan’s Batman masterpiece THE DARK KNIGHT.  This epic film by writer/director Joss Whedon brings together Iron Man, Captain America, Thor, the Hulk, Black Widow, and Hawkeye as they battle Thor’s troublemaker brother Loki.  Fantastic cast includes Robert Downey Jr., Chris Evans, Chris Hemsworth, Mark Ruffalo, Scarlett Johansson, and Jeremy Renner, each doing their thing, each incredibly entertaining, especially since they don’t get along for anything and sound more like a bickering family than a group of superfriends.

Mark Ruffalo takes over the role of Bruce Banner/the Hulk from Edward Norton and does a fine job, immediately making the role his own.  Also features Samuel J. Jackson as Nick Fury and Clark Gregg as Agent Coulson.

If there’s one weakness, it’s that Loki is a somewhat lame villain.  The Avengers deserve a worthier foe.

Still, THE AVENGERS is grand entertainment from beginning to end, by far the best of the Marvel superhero movies.

IRON MAN 3 (2013) – Robert Downey Jr.’s third turn as Iron Man is better than the second film but not as good as the first.  The twist involving the villain Mandarin may not be for everybody, but all in all this is a very entertaining superhero film, a worthy installment in the IRON MAN franchise.  Gwyneth Paltrow, who has played Tony Stark’s love interest Pepper Potts in all three IRON MAN films, probably enjoys her best moments in this third film.

THOR:  THE DARK WORLD (2013) – Chris Hemsworth as Thor is once again the best part of this THOR sequel.  As in the first movie, the scenes on Earth are compelling while the fantasy-injected scenes on Asgard in spite of their dazzling look fail to resonate.  The villains here are Dark Elves.  They should have stuck to baking cookies.

Okay, that about wraps things up here and brings us up to date, but the story is not yet finished, not by a long shot.  Marvel has more adventures planned.  It looks like another Captain America film will be out in 2016 followed by another Thor movie in 2017.  And of course, the Avengers will be back in their own third movie, so as of right now, all is well with the Marvel universe, and since these movies continue to provide quality entertainment, that’s fine with me.