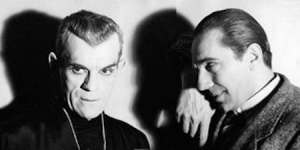 Welcome to the latest edition of MEMORABLE MOVIE QUOTES, the column where we look at great quotes from even greater horror movies.  Up today is one of my favorite horror movies from the 1930s, Universal’s THE BLACK CAT (1934), starring Boris Karloff and Bela Lugosi.

THE BLACK CAT, directed by Edgar G. Ulmer and loosely based on the Edgar Allan Poe tale, was the first time Boris Karloff and Bela Lugosi starred together in the same movie.  It united these two horror icons when they were both at the height of their careers, and so this film is full of fine moments from both these actors.

As such, THE BLACK CAT is packed with memorable lines.  Here’s a look at some of these quotes from THE BLACK CAT, screenplay by Peter Ruric:

Early on, Bela Lugosi gets most of the screen time and dominates the first third of this movie, a tale in which he and Karloff play adversaries.  Lugosi plays Dr. Vitus Verdegast, a man who returns to his native country after a fifteen year confinement in a military prison to seek vengeance against his former commander, the brilliant Hjalmar Poelzig (Boris Karloff), who according to Verdegast not only abandoned his troops but also took away Verdegast’s wife and daughter.

But why take my word for it?  Let Lugosi explain his story himself, as he says to the young American couple Peter Allison (David Manners) and his wife Joan (Julie Bishop) who are vacationing in Hungary:

I’ve written about this before, but you haven’t lived until you’ve heard Lugosi deliver lines in a movie.  There is something so poetic about the way Lugosi speaks.  Part of it is his accent, of course, but the other part is that early on Lugosi didn’t know a lot of English and he had to learn all his lines phonetically, which contributed greatly to his signature speaking style.

Even after Karloff enters the film, when Verdegast and Poelzig finally meet, Lugosi continues to dominate, and continues to get most of the lines.  It’s almost as if director Ulmer was taking full advantage of their famous movie roles, Lugosi as Dracula, who mesmerized his victims with his language, and Karloff as the Frankenstein monster, who hardly said a word and was mute in two of the three Frankenstein films in which Karloff played him.

Lugosi speaks, Karloff listens, as in this scene where Lugosi’s Verdegast lambastes Karloff’s Poelzig for his past actions:

VERDEGAST: You sold Marmorus to the Russians. You scurried away in the night and left us to die. Is it to be wondered that you should choose this place to build your house? A masterpiece of construction built upon the ruins of the masterpiece of destruction – a masterpiece of murder.

And of course Poelzig’s house is a masterpiece of construction because he’s a genius architect and has built a futuristic home which includes sliding doors, radio and television monitors, and all sorts of other goodies that were ahead of their time.

There’s also a good deal of humor in THE BLACK CAT, as in this scene where Peter Allison tries to dismiss what’s going on as hogwash, but Verdegast won’t let him:

PETER:  I don’t know.  It all sounds like a lot of supernatural baloney to me!

In fact, David Manners, who played Peter Allison, usually stuck in overdramatic romantic lead roles, actually gets to show his acting chops in this one and is able to display some humor of his own, as in this scene where he reacts to Verdegast’s comments about Poelzig.

PETER (talking about Poelzig):  If I wanted to build a nice, cozy, unpretentious insane asylum, he’d be the man for it.

As the film goes on, Karloff’s Poelzig begins to assert his dominance and wrests control of the movie from Lugosi’s Verdegast.  As such, while he had been quiet early on, later Karloff becomes the one with the memorable lines, as in this scene where he challenges Verdegast to a deadly game of chess, with the wager being Joan’s soul.

POELZIG:  Come, Vitus. Are we men or are we children? Of what use are all these melodramatic gestures? You say your soul was killed, that you have been dead all these years. And what of me? Did we not both die here in Marmaros 15 years ago? Are we any the less victims of the war than those whose bodies were torn asunder? Are we not both the living dead?  And now you come to me, playing at being an avenging angel, childishly thirsting for my blood. We understand each other too well. We know too much of life.We shall play a little game, Vitus. A game of death, if you like.

And as they approach a chess board, the light bulb goes off in Poelzig’s head.

POELZIG: Do you dare play chess with me for her?

VERDEGAST:  Yes. I will even play you chess for her. Provided if I win, they are free to go.

That last line is expressed with so much confidence that in spite of everything Lugosi has done in this film, there’s no way you can envision him outdueling Karloff at this point.

This scene leads to my favorite line in the entire film.  As Poelzig and Verdegast play chess, Peter’s frustrations grow as he’s trying to get his wife away from the house, and his efforts continue to be thwarted.  The only car is not working, and so Poelzig tells Peter that he’s welcome to use the phone to call for a ride.  Peter does, and to his chagrin, finds that the phone is dead, which with great exasperation is what he tells Poelzig, information that seems to cause the evil architect much delight.

Poelzig turns to Verdegast and nearly sings the following lines with glee:

That last line, “even the phone is dead,’ nails the truth behind everything that has been occurring in Poelzig’s home:  the house is the embodiment of death.  Everything within, even the inanimate objects, are soaked in death, and no one who goes there leaves alive, which might explain Poelzig’s motives for practicing Satanism.  It’s his way of conquering death.

I said earlier that this movie was loosely based on Poe’s THE BLACK CAT, and really, the only connection is the title itself, which both stories share.  Other than this, they pretty much have nothing in common.  This film is only called THE BLACK CAT because Verdegast suffers from a fear of cats, which is revealed when he recoils at the sight of a cat inside Poelzig’s home.  Peter is shocked at this reaction, and Poelzig offers this explanation, seeming ecstatic that his adversary is afflicted with this weakness.

POELZIG:  You must be indulgent of Dr. Verdegast’s weakness. He is the unfortunate victim of one of the commoner phobias, but in an extreme form. He has an intense and all-consuming horror of cats.

We’ll let Lugosi get the last word.  At the end of the movie, Verdegast and Poelzig confront each other, and after a scuffle, it’s Verdegast who comes out on top.  He binds Poelzig and prepares to torture him:

VERDEGAST:  The murderer of 10,000 men returns to the place of his crime. Those who died were fortunate. I was taken prisoner to Kurgaal. Kurgaal, where the soul is killed, slowly.

Fifteen years I’ve rotted in the darkness… waiting. Not to kill you, but to kill your soul – slowly.

THE BLACK CAT is a phenomenal horror movie, one that no horror fan or horror film scholar should miss.  I hope you enjoyed these memorable quotes from this classic movie, THE BLACK CAT.

See you again next time.