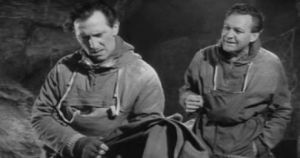 THE QUOTABLE CUSHING:  THE ABOMINABLE SNOWMAN OF THE HIMALAYAS (1957)

Welcome back to THE QUOTABLE CUSHING, that column where we celebrate classic lines of dialogue from Peter Cushing movies.

It’s been such a brutal winter here in 2015 it got me thinking about today’s movie, THE ABOMINABLE SNOWMAN OF THE HIMALAYAS (1957),  Peter Cushing’s second film for Hammer Films’ studios, made in between THE CURSE OF FRANKENSTEIN (1957) and HORROR OF DRACULA (1958).  I thought of this movie because it takes place in the harsh snowy mountains of the Himalayas, which is what my backyard has looked like all winter!

THE ABOMINABLE SNOWMAN OF THE HIMALAYAS does not play like the horror movies Hammer Films became famous for, their gothic period pieces featuring Frankenstein and Dracula, capturing all the blood and gore that went with these tales in vivid color.  First of all, THE ABOMINABLE SNOWMAN was shot in black and white, and it’s also more of a science fiction adventure rather than a horror movie, and as such resembles Hammer’s earlier hits, the Quatemass films from the 1950s.

It also features American actor Forrest Tucker alongside Peter Cushing, which gives it a 1950s American monster movie flavor.  That being said, it really isn’t a monster movie per se, as it’s much more of a psychological adventure that tells the tale of a small isolated group of explorers who have to brave the harsh winter elements as they make their way up the mountains in search of the elusive Yeti.

As always, Peter Cushing has some memorable lines in this movie.  Let’s have a look at some of these lines from THE ABOMINABLE SNOWMAN OF THE HIMALAYAS, screenplay by Nigel Kneale, based on his television play “The Creature.”

Actually, Peter Cushing had starred in the television version of “The Creature” written by Nigel Kneale on BBC television in 1955, so he was familiar with the role of Dr. John Rollason, the scientist in search of the mysterious Yeti.

It’s a very smart script by Nigel Kneale, as the premise of the story is the Yeti are more than just brute snow beasts.  It’s speculated throughout the film that the Yeti are in fact superior to man and have been hiding from humankind in order to survive from our brute animalistic and murderous tendencies.

Forrest Tucker plays Tom Friend, the “Carl Denham” character if you will, the showman scientist who wants to bring back a live Yeti to show the world that they exist and to ultimately make a lot of money doing it.  And Friend is no friend to the expedition, as he makes decisions that endanger the party, as he’s focused on one thing:  the capture of the Yeti, and he’s driven to accomplish this task at all costs.

Peter Cushing’s Dr. Rollason is on the expedition for scientific reasons, to study these creatures, if they exist, and it’s Rollason who begins to tap into the notion that the Yeti are in fact more than “just creatures,” that they are superior beings to humans, both physically and mentally.

The third interesting character in THE ABOMINABLE SNOWMAN OF THE HIMALAYAS is the mysterious Lama (Arnold Marle), the Tibetan monk who seems to possess clairvoyant abilities.  He also seems to share some sort of connection with the Yeti, as made evident by his final line in the movie, which we’ll get to later, but first here’s a look at some earlier lines of dialogue, a conversation between the Lama and Peter Cushing’s Dr. Rollason, in one of the first scenes in the movie.

In the snowy mountains of the Himalayas, Rollason, his wife Helen (Maureen Connell) and fellow scientist Peter Fox (Richard Wattis) arrive at the Tibetan monastery, ostensibly to study plants since they are botanists, but the Lama knows otherwise.  From the outset, he questions Rollason about the party on its way to the monastery, the one led by Tom Friend.  This scene sets the mood for the rest of the movie, as it’s cryptic, eerie, and thought-provoking.  Let’s listen:

LAMA:  Dr. Rollason, what do you know about those men who are coming?

ROLLASON:  Know about them? Not very much.  I had a message from them suggesting we meet here.

LAMA:  From their leader?  A man called Friend?

LAMA:  He passed this way before, some months ago.

LAMA:  Now he returns.  What is this man searching for?

ROLLASON:  Before I can say that I must have a talk with him.

LAMA:  You can say now!  Dr. Rollason, why do you want to help these people?

ROLLASON:  I suppose for the pursuit of knowledge.

ROLLASON:  All of human knowledge.

There is a sense of foreboding in that last question which has “is it worth it?” written all over it.

Later, in a mountain cave, Friend discusses the Yeti with Rollason and the two other members of their party, hunter Ed Shelley (Robert Brown) – (James Bond fans are familiar with Brown’s later performances as M in the Timothy Dalton Bond movies, and also in the last two Roger Moore Bond films), and Andrey McNee (Michael Brill) a young man who had supposedly seen a Yeti and lived to tell about it.

FRIEND:  What you’re suggesting roughly is that this might be some kind of a missing link?

ROLLASON:  It’s strong, intelligent!  It may have powers we haven’t even developed!  It might have inherited the earth.  — And here it is, the last vestige of a species hiding away where nothing else will live.  Waiting in misery and despair for final extinction.

Later, in one of the more exciting sequences of the film, Friend sets a trap to capture a Yeti, but the plan goes awry and Ed Shelley is killed.  Friend and Rollason arrive at the scene to find a shredded net and a dead Shelley.

FRIEND (looking at the net):  It’s ripped to pieces.  Ed!

FRIEND:  Dead?   How did they kill him? ROLLASON:  I can’t find any marks.  It looks like a heart attack.

Moments later, Rollason examines the gun Ed was using and discovers it was loaded with blanks.

ROLLASON:  You loaded the gun.  What with?  Dummy ammunition?

FRIEND:  I didn’t want another dead one.  I knew he’d fire even if the net held.  He was scared!

Rollason discovers an attempt had been made to remove the carcass of the dead Yeti that was inside the cave with Ed.  He deduces the Yeti had come to the cave to reclaim their dead.

ROLLASON:  This was all they wanted.

FRIEND:  You mean they weren’t after Ed?

FRIEND: But they killed him! ROLLASON:  No they didn’t, Friend.  You did.

That last line is one of Cushing’s best in the film, and it’s said with such disdain, it cuts through the winter snow like an ice pick.  Cushing’s Rollason has had enough of Friend’s antics, and his frustration comes through in that one line.

Later, Friend and Rollason debate the intelligence of the Yeti:

FRIEND:  Let’s get something straight, doc.  These are animals.  Dangerous killers!  And that’s all they are.

ROLLASON:  McNee died from an accident.  Shelley died from his own fear.  It isn’t what’s out there that’s dangerous.  It’s what in us.

ROLLASON:  I’m wondering how old that face is?  It’s seen a long life.  A hundred years?  Perhaps more.  This isn’t a face of a savage being.  It’s generous.

ROLLASON:  They’re waiting for us to die out.

FRIEND:  For mankind to die out?

FRIEND:  Are you out of your mind, doc?

And the last line in the movie, spoken by the Lama, occurs after Rollason returns from the expedition, now denying the Yeti’s existence, even though he had seen them.  Rollason’s stunning statement is affirmed by the similarly affected Lama as he states to close out the film:

LAMA:  There is no Yeti.

THE ABOMINABLE SNOWMAN is an intelligently written movie, well-acted by Peter Cushing and the rest of the cast, and features nifty direction by Val Guest.  Its shots of snowy mountains and ice cold blizzards take on even more flavor when viewed in the winter.

So that wraps things up for another edition of THE QUOTABLE CUSHING.  Hope you enjoyed today’s look at THE ABOMINABLE SNOWMAN OF THE HIMALAYAS.  Please join me again next time as we look at more quotes from another Peter Cushing movie.