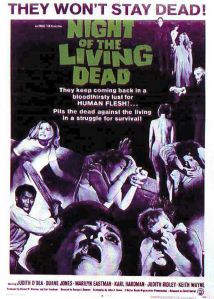 Here’s my latest IN THE SPOOKLIGHT column, on the George Romero classic NIGHT OF THE LIVING DEAD (1968), published in the October 2014 edition of The Horror Writers Association Newsletter.

Today we have THE WALKING DEAD.  But years ago, the zombie phenomenon which swept the nation was NIGHT OF THE LIVING DEAD (1968).

George Romero’s cult classic from 1968 is more than just a superior horror film:  it’s a landmark film that inspired a genre.  It’s the film that put zombie movies on the map, or at least the modern zombie movie.  Before NIGHT OF THE LIVING DEAD, zombie movies, while still a genre, with classic films like WHITE ZOMBIE (1932) starring Bela Lugosi, and Val Lewton’s I WALKED WITH A ZOMBIE (1943) were hardly a major player in the horror movie canon. NIGHT OF THE LIVING DEAD changed all that.

Best-selling author Craig Shaw Gardner tells a neat story about first seeing NIGHT OF THE LIVING DEAD in the 1960s at the movies at the tail end of a triple feature, following THE CURSE OF FRANKENSTEIN (1957) and HORROR OF DRACULA (1958).  Now that’s a triple feature I wish I had gone to see!  Gardner recounts that when NIGHT OF THE LIVING DEAD started, he and his buddies almost left the theater because the film was in black and white, and they thought it was going to be a cheapie B-movie, but they stayed, and they were rewarded by one of the scariest movies they had ever seen.

In large part, NIGHT OF THE LIVING DEAD works so well because it is so unlike the other horror films of the decade.  For ten years England’s Hammer Films dominated the horror market with their opulent period piece thrillers and Frankenstein and Dracula sequels starring Peter Cushing and Christopher Lee.  At the same time Vincent Price was matching them fright for fright with his appearances in the 1960s Roger Corman Edgar Allan Poe movies.

But unlike HALLOWEEN and other trend-setting horror movies, films like THE EXORCIST (1973), JAWS (1975) and THE BLAIR WITCH PROJECT (1999), success for NIGHT OF THE LIVING DEAD didn’t happen overnight.  In fact, NIGHT OF THE LIVING DEAD was not a box office smash but instead became a cult hit as it was a drive-in movie favorite and a midnight movie mainstay for years and years.  Romero himself didn’t make a sequel until ten years later, with DAWN OF THE DEAD (1978).

The low budget style works to the film’s advantage, as there is a realistic feel throughout.  It makes you believe that the zombie apocalypse might truly be happening.  Of course, the main reason NIGHT OF THE LIVING DEAD succeeds in spite of its low budget is the stylish direction by George Romero. It has no-name actors, and it’s shot nearly all in one place, at a farmhouse, but there’s nothing cheap about the way this one is crafted.  In fact, the opposite is true.  Romero’s direction is almost art-house level.

NIGHT OF THE LIVING DEAD tells a simple story.  A young woman name Barbra (Judith O’Dea) and her brother are attacked by a zombie in a graveyard.  Her brother is killed, and while she’s still in shock, she escapes to a farmhouse where she meets another man Ben (Duane Jones) who is also fleeing from the reanimated dead.  There are also more people hiding out in this house, and the rest of the film chronicles their efforts to ward off the attacking zombies while trying to learn why all of this is happening.

NIGHT OF THE LIVING DEAD is as dark a horror movie as you’re going to find, and it still works today.  It’s brutal storyline and shock effects still hold up rather well, even for modern audiences.

Romero does a tremendous job at the helm, keeping this film suspenseful throughout, as it builds up to its horrific graphic conclusion.  The screenplay by Romero and John A. Russo tells a flat out in-your-face terror tale, but it also does something more, as it also serves as a reflection of the turbulent times of the 1960s.

It was released in 1968, one of the more violent years in American history, with the assassinations of both Robert Kennedy and Martin Luther King, Jr.  There was also the Vietnam War, and racial tensions were heating up.  With the main character Ben being a black male, pretty much unheard of in 1968, especially in horror movies (Sidney Poitier wasn’t doing the horror film thing) the film really delves into race relations, especially in light of how this movie ends.

Interestingly enough, the character was originally written to be quite different.  Ben was going to be a rough and crude truck driver, but when the studious looking Duane Jones auditioned for the part, the role was re-written for him.  Seriously, I can’t imagine the ending packing the same wallop with a white truck driver Ben.  The film’s ending blows you out of the water because Ben is black.  It lifts all that has come before it to another level entirely, and makes NIGHT OF THE LIVING DEAD something far more than just a straightforward horror movie.  Very few horror movies can make this claim.

Also of note, the word “zombie” is never used in the film.  The zombies are referred to as either “those things” or ghouls.  TV’s THE WALKING DEAD has also borrowed from the same playbook, as they don’t use the word zombie in their show either.

This Halloween season, while you’re enjoying the latest episodes of THE WALKING DEAD, remember the film that inspired it, the one that created the movie zombie as we know it today: NIGHT OF THE LIVING DEAD.

They’re coming to get you, Barbra!