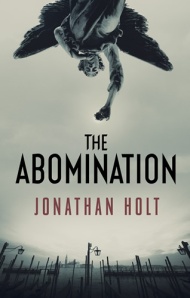 If you like conspiracies, then The Abomination, a novel by Jonathan Holt, might be the book for you.

Let’s see, it features the CIA, the Catholic Church, the U.S. military, the Bosnian underground, the virtual world of alternative social media, and the Italian police force, all intertwined in various degrees of mischief, and just who is pulling the strings and for what reason is what the main characters in this one have to find out. There’s no shortage of questions in this mystery novel, but it’s the answers to these questions that don’t always satisfy.

The action takes place in Venice and begins with the discovery of a dead body, the murder victim a woman dressed as a Catholic priest. Taking the case is the seasoned and respected Detective-Colonel Aldo Piola and his new young assistant, the recently promoted Captain Kat Tapo. Kat is an ambitious young woman, and her methods immediately impress the older Piola, so much so, that they eventually have a romantic affair, even though Piola is married.

Meanwhile, young Second Lieutenant Holly Boland of the U.S. army arrives in Venice to work at the army post there. When she receives a request for information regarding the Bosnian war in the 1990s, she discovers that the files she is looking for have only just recently been destroyed. And then, when the woman who made the request turns up dead, Holly’s path crosses with Kat’s, as the two murder cases appear to be connected.

At the same time, a genius mathematician named Daniele Barbo is about to go to trial in a computer hacking case. Barbo is famous for creating Carnivia, a 3D mirror world of his home city of Venice, a popular online destination because of its ability to keep identities anonymous. Barbo becomes involved in the murder case when Kat and Boland discover that the murder victims were using Carnivia to hold secret meetings.

There’s no shortage of intrigue in The Abomination, the first book in a trilogy about the virtual world of Carnivia, and I enjoyed following both Kat and Holly on their investigative paths which led them into the shady dealings of the CIA, the Catholic Church, and the Bosnian underground. However, there’s just so much going on and so many players involved, I found it more and more difficult to buy into the conspiracy plot the more I learned about it. It was like being in a room where everyone was talking at the same time. It’s noisy. I would have preferred a tighter conspiracy story with fewer players.

I liked both Kat and Holly Boland a lot, and they were my two favorite characters in the book. It was refreshing to have not just one, but two strong female lead characters.

I also really enjoyed Detective-Colonel Aldo Piola, but once it becomes clear that the novel is going to be more about Kat and Holly, Piola strangely disappears from the proceedings and hardly matters anymore as the story enters its final act, which I found disappointing since he was such a solid character early on.

The villains here aren’t bad, but no one really stands out either. The main player pulling the strings who will remain nameless to avoid spoilers plays so many different sides of the fence I’m still not sure I understand the character’s intentions.

The Abomination is entertaining enough. It’s an ambitious story and it’s well-written, with likable characters, but I never really got into it as much as I expected, and the biggest reason for this lack of enthusiasm was its conspiracy-filled plot which became so convoluted I found myself not believing it. I wish the plot had focused on a smaller more conceivable conspiracy.

And for a tale of lurid murder and intrigues, it never got quite as abominable as I expected it to.