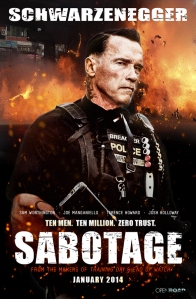 This is my review of SABOTAGE (2014) which went up this weekend at cinemaknifefight.com. Remember, if you like to read about movies, check out cinemaknifefight.com where you’ll find new movie content posted every day by L.L. Soares, myself, and a very talented staff of writers.
Thanks for reading!
—Michael

I, for one, have been very happy to see Arnold Schwarzenegger back in the movies again. I missed him, and although his comeback films have been somewhat of a mixed bag— the lighter fare of the trite actioner THE LAST STAND (2013), and the convoluted prison flick ESCAPE PLAN (2013) with buddy Sylvester Stallone, and of course his appearance in THE EXPENDABLES series— I’ve enjoyed seeing him in these films. At the very least, they’re entertaining, and at the end of the day, that’s what it’s all about.

Now comes SABOTAGE, an attempt to make Arnold Schwarzenegger relevant again by putting him in a darker movie in a role with more meat on it so Arnold can shake off that rust and show he’s still got some acting chops.

Well, Arnold does fine, but the story could have used some work.

In SABOTAGE, Arnold plays John “Breacher” Wharton, a DEA agent who leads a rough and tough task force whose job it is to take down the world’s most dangerous drug cartels. And Breacher isn’t just any DEA agent. He’s a legend, the best that ever was, and in government circles, he’s pretty much untouchable.

The film opens with Breacher watching a grisly video of a woman being tortured by nasty drug cartel thugs, and we learn later that this woman was Breacher’s wife, who was kidnapped along with his son by an enemy drug cartel, and they were brutally tortured and murdered. The cartel even mails body parts to Breacher on a regular basis. So, when the film opens, Breacher is in a very dark place.

We meet Breacher’s team, a group of colorful characters who look like they’re vying for their own EXPENDABLES movie. During a drug raid, this group, led by Breacher, steals some of the drug money they find, and hide it to claim it later, but when they return, it’s gone. There’s an investigation by the FBI, but eventually, without any evidence to prove that they stole the money, the investigation is dropped.

But soon members of Breacher’s elite squadron start showing up dead. Just who could be murdering these top of the line trained assassins? The evidence points to a drug cartel hit squad, and Breacher and his team concentrate their efforts on finding these hit men. They are aided by the local police, led by a persistent and unflappable detective named Caroline (Olivia Williams) who sees it as her mission to solve these murders since they’re happening in her neighborhood, and she vows not to quit, even though Breacher and his people advise her to walk away, that she’s in way over her head.

And when members of the team continue to die in the most brutal of ways, they begin to distrust each other, believing that whoever stole the money wants to shut the rest of them up. It’s up to the legendary Breacher to keep things together and get to the bottom of these sordid killings. Unless, of course, Breacher’s the man responsible for them.

Needless to say, SABOTAGE is a very dark tale about some very unlikable people doing some very nasty things. There are grotesque execution-style murders, graphic torture videos, and plenty of bullets to people’s heads. The film definitely earns its R rating, although the blood is CGI generated and looks it, which is not a good thing.

Arnold Schwarzenegger is very good as John “Breacher.” The attempt to put him in a more serious role works, and Arnold is up to the task. Granted, we’re not talking Oscar caliber acting here, but in terms of action stars, Arnold does a nice job. He’s sufficiently grim, but don’t expect tears and heartfelt emotional scenes. There was something very John Wayne-like about Arnold’s performance in this movie. It reminded me a lot of some of Wayne’s later roles, and if Wayne were alive today, this is the kind of role he would have played. So, Arnold is fine.

Where the movie struggles is with its screenplay by Skip Woods, which has two main problems: it does not do a good job with character development, and its plot never really grabbed me.

Breacher’s team is a collection of testosterone-filled muscular maniacs, and yet we never get to know these guys. There are some decent actors here who are largely wasted because we never learn anything about these characters other than they are highly trained assassins. That’s not enough for me. The most creative thing about them is their names, and that’s about it.

Sam Worthington, who we haven’t seen much of lately, not since AVATAR (2009) and the mediocre CLASH OF THE TITANS movies, plays James “Monster” Murray, and even though he’s in this one quite a bit, it’s largely a throwaway role. We never learn much about “Monster,” and Worthington doesn’t really get to do all that much. We’ll be seeing a lot of Worthington in the next few years, as he’s slated to star in all three of James Cameron’s upcoming AVATAR sequels, coming out in 2016, 2017, and 2018.

Joe Manganiello plays Joe “Grinder” Phillips, Terrence Howard plays Julius “Sugar” Edmonds, and—well, I could go on, but you get the idea. A bunch of fancy names for characters we just never get to know.

There are a couple of LOST alum in the cast. Josh Holloway, who played Sawyer on LOST and currently stars in the TV series INTELLIGENCE, plays Eddie “Neck” Jordan. When he’s in the movie, Holloway is very good, but like the rest of the squadron, he doesn’t get to do much. Harold Perrineau, who played Michael on LOST, has a thankless role as Jackson, a police sidekick.

The two women in the cast actually fare better than the men. Olivia Williams makes for a rather interesting police detective, as she finds it personally insulting that Breacher and his team continually talk down to her, and she works hard to gain Breacher’s respect, which she eventually does.

And then there’s Mireille Enos as Lizzy Murray, who’s probably the most fleshed out member of Breacher’s team. She’s certainly the most memorable. Lizzy is an ultra-intense drug-addicted nutcase, and she displays more grit, gumption, and high octane energy than the rest of the team combined. Enos is great in the role. The only problem I had with Lizzy is that she’s not a very likeable character, and so it’s very difficult to warm up to her. There’s something very grating about her presence whenever she’s on screen. She’s a walking menace, ready to devour every male, female, and controlled substance in her path. But she’s memorable! Enos appeared in last year’s WORLD WAR Z (2013) and GANGSTER SQUAD (2013), and I found her much more impressive here in SABOTAGE.

I was also less than impressed with the main plot of SABOTAGE. Since the driving force of the movie is the mystery of who is killing off members of Breacher’s team, the main villain in the film is an unknown. For me, the best action flicks have at their core a nasty villain. It makes the heroes that more compelling to square off against a worthy adversary. In SABOTAGE, Breacher and company are chasing shadows, and that’s just not that exciting, especially considering that they operate in the world of deadly drug cartels. You’d think there’d be one very malicious mastermind pulling the strings, a guy you’d really want to see Arnold kick the crap out of, but this isn’t the case.

So, you have this elite squad of unstoppable assassins with little to do but hide out and wait for their time to be killed by the elusive murderer, and this just isn’t my idea of a compelling story. I was much more interested in Breacher’s dealings with the drug cartel that murdered his wife and son. That’s the event that is inside Breacher’s head throughout this film, the dagger that strikes at his heart, and yet we hardly ever see him deal firsthand with this. Instead, he’s playing homicide detective with Detective Caroline. I would have much preferred a plot where Breacher took his team into the treacherous world of drug cartels to go after the bastards who murdered his family.

I also found it strange that these guys all live in the same town. It makes it so easy for the assassins to kill them. That’s why Detective Caroline is investigating the murders, because they’re all taking place in her precinct. You’d think that these guys would live all over the world so this kind of thing couldn’t happen. At the very least, once it started happening, you’d think they’d go into hiding or something. But no, they just hang around, passively waiting for the next member to drop.

I also wasn’t crazy about the title. SABOTAGE says very little about this movie. I guess it refers to the attempts to bring down this elite team, but the film is hardly about sabotage.

Director David Ayer gives SABOTAGE a slick polished look, and there are plenty of grisly close-ups of some nasty execution style murders, although there is certainly an overuse of CGI created blood. I would have enjoyed the violence more if these scenes held more relevance. They don’t, because most of the characters in this one are underdeveloped, and so I didn’t care all that much when they died. As a result, the bulk of the violence in this movie rings hollow.

The action scenes really aren’t all that impressive either. Other than some shoot-outs that are nothing out of the ordinary, there’s nothing in the way of exciting action sequences here. Nor is there much suspense in this one. For the most part, SABOTAGE plays like a police drama with DEA agents as the suspects.

Ultimately, SABOTAGE is a mixed bag. Arnold Schwarzenegger is as entertaining as always, in what turns out to be a slightly darker role for him. And he still manages to get the best lines in the movie. Not that he’s spewing goofy one-liners throughout, but he does get to unleash a couple of well-placed zingers that generate some much needed laughter.

But the rest of the cast in this one is never developed to any degree of satisfaction, and the plot fails to captivate. SABOTAGE is a grisly take on a not-so-interesting tale that would have been much better had it found a story worthy of its actors, the characters they played, and the sordid world they found themselves in.

I give it two knives.