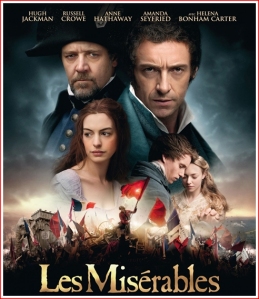 I was pretty tough on LES MISERABLES (2013) when I reviewed it last year for this blog.  I think my title was, LES MISFIRE?

To be fair, I didn’t dislike LES MISERABLES when I saw it in the theater.  I simply was disappointed it wasn’t better, and I think it came across in my review that I wasn’t all that crazy about it.

Anyway, I saw it again recently on DVD, and I have to say, I did enjoy it better the second time around.

While my biggest criticisms remain the same- that the film seemed to lack a soul, that it came off as completely gloomy and dark with the theme of redemption noticeably absent, and that the pacing seemed off, in that things moved too quickly without natural breaks in between scenes and songs, I did appreciate more about the film the second time around.  I even found Russell Crowe’s singing somewhat more tolerable.

I love the stage musical LES MISERABLES, and I suppose any film version wouldn’t be able to match the spectacle of how it plays on the stage.  This film version by director Tom Hooper didn’t even seem to try.  It dove right into a brutal realism that somehow didn’t work as well as it should have.  I mean, both Hugh Jackman and Anne Hathaway looked phenomenal in their misery, but this gritty heavy realism came off as too dark for the bulk of the movie and detracted from the musical numbers.  It’s a case where Jean Valjean and Fantine looked so beaten and emaciated that it was difficult at times to suspend disbelief and accept them breaking into song.  The realism also made for some harsh musical numbers.

I still thoroughly enjoyed Hugh Jackman’s portrayal of Jean Valjean, and Anne Hathaway as Fantine.  Both their acting performances and singing voices were amazing.  Russell Crowe, on the other hand, was a different story.  I found his voice grating when I saw the movie the first time.  I found it slightly less harsh this time around.  I also enjoyed Crowe’s performance as Javert better the second time around and found him to be a much more dominant character than when I saw it the first time.

I still was not wowed by Amanda Seyfried as Cosette, which still surprises me, since usually I enjoy her a lot.  And although his singing voice was among the best in the movie, Eddie Redmayne didn’t blow me out of the water as Marius either.

And the pacing of the film definitely slows down during the third act.

Yet, the film looked just as amazing on DVD as it did on the big screen.  Not much was lost in terms of picture quality.

Parts of the story also worked better for me the second time.  The blockade sequence near the end I thought fell flat on the big screen.  I found it more compelling this time around.  I remember growing restless in the theater at this point in the movie, and this wasn’t a problem in the comfort of my living room.  The chase storyline between Jean Valjean and Javert also played better at home, perhaps because of the intimacy of the smaller screen.

So, is LES MISERABLES worth your time on DVD?

Well, it certainly provides grand entertainment, and it does a pretty nice job bringing the musical to life.  It remains to be seen whether or not making it darker, grittier, and more depressing than the stage musical was a good idea.  I wasn’t nuts about this interpretation, mostly because the sense of hope found throughout the musical seems to be lost here.  But this wasn’t enough to ruin the movie for me.

And with Hugh Jackman and Anne Hathaway leading the way, and Russell Crowe doing the same, especially when he’s not singing, the cast also excels. While I do have a problem with the dark take this movie has on the story, I have to admit that I appreciated its dramatic elements better the second time around.

LES MISERABLES, the 2012 movie version, in spite of its flaws, is still an engaging musical and certainly worth a look.